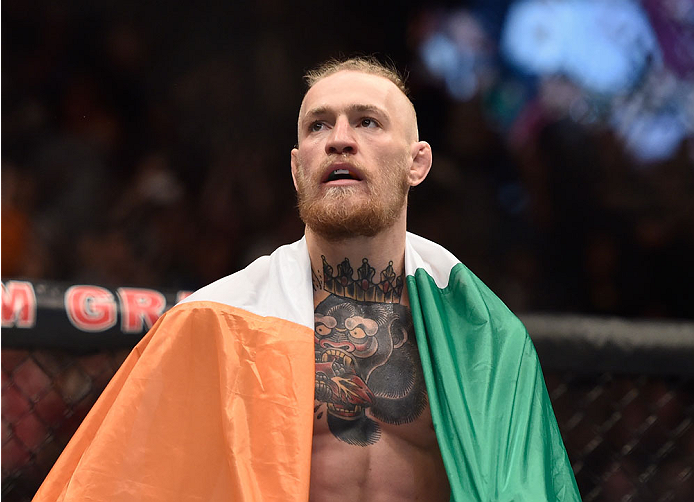 THE CHAMP IS HERE…TO STAY
Demetrious Johnson may not get the attention of a Conor McGregor (then again, who does?) but you better get used to him, because it doesn’t look like he will be giving up his UFC flyweight championship anytime soon. Sure, the names are bigger in other divisions, but as far as beating everyone in his path and being the most dominant champion in the UFC this side of Ronda Rousey, “Mighty Mouse” has set a bar for the promotion’s newest male division that will be hard to reach or exceed in coming years. When discussing his fight with Chris Cariaso Saturday afternoon, MMAJunkie.com ace John Morgan put it perfectly, saying that we will either see Cariaso scoring a monumental upset, or Johnson continuing to dominate, and that we should enjoy getting to see one of the sport’s best doing his thing. Johnson dominated, and yes, it’s good to see an athlete at the top of his game, building a legacy that could go down in the books one day as one of the best ever.

SATURDAY’S TRUE STAR
Yes, Demetrious Johnson was dominant in victory, “Cowboy” Cerrone impressed with another win, and Conor McGregor was Conor McGregor, but for my money, Saturday’s star was unquestionably Dominick Cruz. Out for just under three years due to a series of injuries that would have left lesser men a shell of their former selves, Cruz didn’t just make it back to the Octagon, he scored what may very well be the most impressive win of his career in stopping Takeya Mizugaki in 61 seconds. It was the kind of performance that you couldn’t have imagined Cruz putting on in his first fight back, especially against a hard-nosed contender like Mizugaki. No one does what Cruz did to the Japanese contender, and while some wondered if it would be good to give Cruz another fight before he gets a chance to regain the bantamweight title he never lost in the Octagon, UFC President Dana White said that Cruz is next for champion T.J. Dillashaw, and I couldn’t agree more. This is a fight that doesn’t need marinating. Cruz showed world-class form against Mizugaki, and again, he never lost that belt in the Octagon, so if anyone has the right to the next shot, it’s him. Add in the rivalry between Cruz and Dillashaw’s Team Alpha Male crew, and this is a Fight of the Year waiting to happen.

COWBOY AND SHOWTIME
Now for a title fight that could use a little marinating…Donald “Cowboy” Cerrone picked up his fifth consecutive win Saturday night, taking a hard-fought win over Eddie Alvarez, and for most, that would be an immediate ticket to a shot at the belt. But Cerrone lost a one-sided 2013 bout to lightweight champion Anthony Pettis, making you wonder if things would be different the second time around, especially with Cerrone’s tendency to start slow. The way I see it, everything depends on the December bout between Pettis and Melendez. If Pettis wins, get Cerrone a win or two more before making the rematch. If “El Nino” takes the belt, then the stage is set for what would be an interesting stylistic clash. Either way, don’t expect Cerrone to stop fighting while the UFC brass figures out his place in the title race.

THE UNDERGROUND KING’S CROWN IS UNTARNISHED
Yes, Eddie Alvarez lost his long-awaited UFC debut to Cerrone, but I don’t think anyone left the MGM Grand Garden Arena asking not to see “The Underground King” again. Alvarez is a top-flight 155-pounder, he proved it last night, and he will always put on action-packed fights. That sounds like a fighter I’d pay to see.

MR. McGREGOR
What more can be said about “The Notorious” one at this point? Having heard it all, I’ll make it brief then. The Dubliner is the real deal. Beating Dustin Poirier proves that. But perhaps more importantly at this point, he’s a legit star. How so? Forget the reams of copy written about him and the countless interviews. McGregor’s gift is that when he fights, you want to see him. You will rearrange your schedule to watch him perform, whether it’s to win or to lose. Very few fighters fit that bill, and McGregor has it. But let’s also return to the topic of fight marinating – is he ready for a title shot? Maybe. But what’s the rush? Let him fight, let people see him, and let’s see him against the winner of November’s Dennis Bermudez-Ricardo Lamas bout. If he wins that, he’s ready. I know, that’s not brief, but that’s what the topic of Conor McGregor can do.

ROMERO-KENNEDY
When looking at what was a great fight between Yoel Romero and Tim Kennedy, you can’t help but feel that Kennedy got the short end of the stick in the bout. Yes, he got legitimately stopped by Romero in the third round, but most believe the fight should have been over after round two. If you didn’t see it, Romero got rocked badly late in round two, with the bell saving him from an emphatic knockout loss. Romero was still stunned and on rubbery legs as he looked out upon press row, waiting for his cornermen to bring in his stool to sit on. Romero sat on that stool, but he remained there as round three commenced. That should have been the end of the fight there, but he got 28 additional seconds to rise and fight as a mix of too much Vaseline on a cut, a language barrier, and general madness kept the fight from continuing when it should have. Kennedy rose his hands, believing he had won, but the fight wasn’t over, and once it restarted, it was Romero scoring the knockout win. It was a black mark on an entertaining Fight of the Night bout, and while the odds of the result being overturned to a no contest are slim, a rematch would likely be welcomed by fans and Kennedy.

THE RETURN OF CAT
After a torturous year and a half that included a knee injury and the tragic death of her husband, I didn’t think Cat Zingano would be able to return to form in Saturday’s bout against Amanda Nunes. The way I saw it, it was just too soon. But sometimes situations like that bring out the best in fighters, and after a rocky first round, Zingano pulled off a dominant stoppage win that put her into her first world title fight against Ronda Rousey. And though Zingano will be the underdog against “Rowdy” Ronda, it really doesn’t matter. She’s already won by making it back after all she’s been through.

THIS AND THAT
Sure, we celebrate the winners on fight night, but let’s not forget those who stepped up and fell short of victory. Nothing captured how much is on the line every night in the Octagon than seeing Takeya Mizugaki, Chris Cariaso, and Dustin Poirier after their defeats on Saturday. This isn’t just a paycheck for these guys, and they deserve just as much respect for daring to be great…It was very cool seeing current heavyweight champion Bermane Stiverne and former welterweight champion Andre Berto in attendance Saturday night, Berto especially, considering his MMA lineage. His father competed in UFC 10, his brother is an MMA fighter, and his sister appeared on TUF 18. Don’t expect to see the former Haitian Olympian in the Octagon anytime soon, as he still has business to take care of in the boxing ring. Nice to see the crossover between the two sports though. Hey folks, when all is said and done, whether it’s boxing or MMA, it’s still a fight.