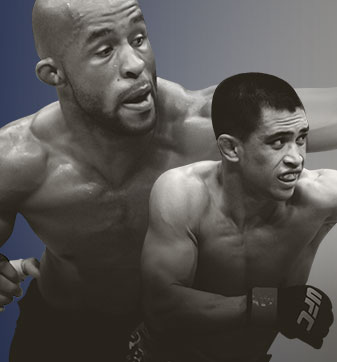 When UFC 178 lands in Las Vegas this week, the lineup will feature one of the best cards from top to bottom for all of 2014.  The flyweight title is up for grabs in the main event as Demetrious Johnson looks for the fifth successful defense of his 125-pound title as he takes on top 10 fighter Chris Cariaso — but that's just the tip of the iceberg.

Donald “Cowboy” Cerrone is back in action as well at UFC 178, welcoming in UFC newcomer Eddie Alvarez, who brings with him one of the nastiest reputations for any fighter in the lightweight division.  Irish bad boy Conor McGregor also looks to conquer United States soil once again when he gets the biggest test of his UFC career in No. 5 ranked Dustin Poirier.

Every single fighter on the UFC 178 main card is ranked in the top 15 of the world with only Alvarez currently sitting outside the top 10.  In other words, this card is stacked.

Heading into UFC 178, Demetrious Johnson is definitely the overwhelming favorite to come out on top and beat Chris Cariaso, and there's plenty of evidence to back up that assumption.  Johnson has looked virtually untouchable at 125 pounds, especially in his last few fights, where he's just gotten better and better.

Johnson has the highest striking accuracy in the division, landing 56.2-percent of the time, and he mixes that attack together with a prolific wrestling game where he's put opponents on their back 24 times since making the move to 125 pounds, which accounts for the most in the division.  Johnson's best work has come in close, where he's mounted a serious attack with his clinch game.  Johnson has landed more significant strikes in the clinch than any fighter in UFC history, so he loves to be inside, stuck to his opponent and just wearing them out with punches, knees and elbows.

Cariaso counters with the fact that he's never been outstruck in a fight in his UFC or WEC career, while boasting the third highest striking accuracy in the division.  He also has the lowest strikes absorbed in flyweight history and he's going to need that kind of defense against Johnson.

What Cariaso has to hope for in this fight is to completely surprise Johnson similar to the way T.J. Dillashaw threw Renan Barao off in their bout with a big punch that landed early, knocking the champion down and never letting him completely recover again. The shock of that moment completely took Barao out of his game and allowed Dillashaw to execute the best game plan possible over four-plus rounds. Cariaso needs to find a way to hurt Johnson in a way no other flyweight has thus far and he has to do it early because as the minutes wear away and the rounds start to expire, his chances of winning dissolve in a hurry.

Once Johnson finds his rhythm it's just a matter of time before he systematically dismantles Cariaso both standing and on the floor.  Johnson will either end this one early with a series of punches to stun and put Cariaso away or he'll cruise to a unanimous decision with shutout scores across the board.  Chances are, however, Johnson will find a way to put Cariaso away and walk out with his flyweight title in hand.

The odds are so close in this fight that there's no favorite and there's no underdog as Donald “Cowboy” Cerrone faces newcomer Eddie Alvarez in the co-main event at UFC 178.

The book on Cowboy's skill set is well-known in the UFC.  He's a long, rangy striker who lands with over 47-percent accuracy, and as a former professional kickboxer, he's got some of the nastiest strikes in the lightweight division.  His defense while standing might be the one weak spot in his game, but even that rarely gets him into too much trouble before his counters do a lot more damage to his opponents.  Cerrone is also good with his wrestling, despite his preference of a stand-up battle.  He lands takedowns with almost 48 percent accuracy and blocks his opponents' attempts just over 65 percent of the time.

As for Alvarez, he's one of the most complete fighters in the division on day one when he arrives.  Alvarez hits like a truck and has finished 64 percent of his fights by knockout.   He averages about the same output as Cerrone on the feet although his accuracy is slightly lower.  Where Alvarez excels is with his wrestling, where he averages almost five takedowns per 15 minutes, landing with almost 60 percent accuracy.

If there is a weak spot in Alvarez's game it's his love of engaging his enemies and throwing caution to the wind at points and just getting involved in a slugfest.  While he's still come out ahead far more times than he's gone down, Alvarez has never faced a top five fighter in the UFC and Cerrone will give him everything he can handle and more.

Cerrone is at his best when he can get aggressive and go after an opponent with his tremendous reach and knockout power.  Alvarez has no problem pursuing anybody he faces, but in this fight it could backfire in a big way.  Cerrone just has a way of finding the right spot to tag an opponent on the button to put their lights out.  If Alvarez decides to stand in the pocket and trade with Cerrone, chances are things won't end well for him.

This could end up being the Fight of the Night, but it's likely at some point Cerrone finds an opening, slips through a punch or a kick and puts Alvarez away before the final bell.

Judging by the odds in this fight you'd think Conor McGregor was the fighter currently ranked higher in the featherweight division, but as it turns out he's just a massive favorite over Dustin Poirier, who is actually ranked No. 5 at 145 pounds.

McGregor has been stunning through three fights in his UFC career.  He blasted Marcus Brimage, out wrestled Max Holloway, and then decimated Diego Brandao in his last fight.  McGregor's confidence may seem a little too boisterous for a fighter who is 3-0 in the UFC without a single win over a top 10 opponent, but the fact is this brash Irishman has a reason to be so proud of what he's done and what he's capable of doing.  McGregor is a devastating striker on the feet - he lands 4.55 strikes per minute and he has an 87 percent finishing rate by knockout or TKO.  His wrestling may not be his primary weapon, but McGregor is no slouch there either.  He's landed 3.71 takedowns per fight so far in the UFC with over 83 percent accuracy. He's also never been taken down, which bodes well for his ability to control where this fight takes place.

Poirier will give him a serious test for the first time in his UFC career, however, because this veteran has more wins and finishes than any other fighter in the history of the featherweight division.  Poirier is actually a more accurate striker than McGregor, as he lands with just under 50 percent accuracy and his submission game is top-notch.  He's the only fighter in the UFC to land two different D'Arce choke finishes, and that's just one of his many weapons on the ground.

Defense is where the two fighters separate dramatically and that could be the difference in this matchup.

McGregor is nearly impossible to hit.  He's dodged almost 72 percent of the strikes attempted against him, which is an astonishing rate for any fighter in the UFC.  While Poirier's defense isn't bad, he currently sits at just over 57 percent and has been known in the past to take a few hard shots to counter with some of his own.

In this fight, playing with McGregor's fire will get Poirier burned bad.  McGregor knows how to punch the gas and keep going until his opponent is finished and chances are if he hurts Poirier, he won't let up until the referee drags him off.  Poirier has an incredible ability to come back, but with McGregor's power and speed he just may not get the chance this time around.

If you're looking for a potential upset on the main card it may be worth checking out the women's bantamweight bout between Cat Zingano and Amanda Nunes.

Zingano returns to action after more than a year away from the sport dealing with major knee surgery.  She has a title shot looming overhead because with a win chances are she'll be facing Ronda Rousey next.  Zingano is an extremely powerful fighter for 135 pounds. She holds dynamite in both hands and a long background in Brazilian Jiu-Jitsu should the fight hit the mat. Her only Octagon experience was a knockout over Miesha Tate in her debut, but it can't be discounted that she was down two rounds before finishing the fight in the third.

At one time, Nunes was the top prospect in the division, with a dangerous stand-up attack coupled with the kind of ground and pound that would make Mark “The Hammer” Coleman proud to watch.  Nunes suffered a few setbacks in her career, but since coming to the UFC, she's turned into an unstoppable force.  She's aggressive with her strikes, landing 4.39 per minute and mixing it up with almost four takedowns per fight.  Nunes has also been very active, which means her timing could be on point while Zingano tries to get her feet wet again.

The odds in this fight favor Zingano based on her skill set, undefeated record and a reputation for being a nasty finisher.  She's been to a decision only once in her career and Zingano definitely leaves everything in the cage each time she steps into compete.  Still, Nunes has a lot of confidence right now and potentially a mental edge over Zingano after she's sat out for the last 17 months.  Zingano will be the popular pick, but if there's an upset to keep an eye on it's Nunes taking the No. 1 ranked contender down and dropping anvils with her fists to either get a stoppage or control the action enough to pull off the decision win.