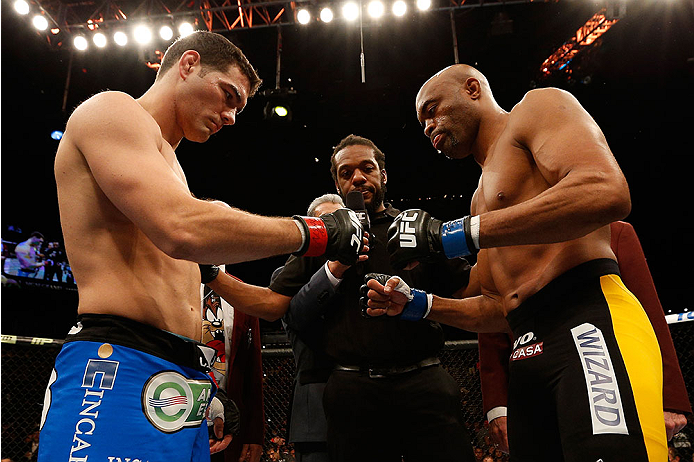 What can you say about witnessing the leg injury suffered by Anderson Silva Saturday night, other than you wish the future Hall of Famer well in his recovery after surgery and hope you never see an injury like that again. And if, like me, you’ve already seen an injury like that once, as I did in Corey Hill’s 2008 bout against Dale Hartt, time does not temper the feelings you get when you see a similar injury. It is an unfortunate part of sports – and not just combat sports – that freak occurrences like this happen. We’ve seen it in kickboxing, football, soccer, basketball, and it’s never easy to watch, but in a sporting endeavor where human bodies are in motion, it’s an unfortunate – yet thankfully rare – part of the game.

Speaking of Hill, the former Ultimate Fighter 5 competitor did come back from his surgery for a broken leg, fighting several times over the last few years. But at 38, and with a long rehab ahead of him, will Silva even want to fight anymore? Simply put, his legacy as the greatest MMA fighter of all-time is secure, he’s got money in the bank, he’s got a family which would like to have him around more, and there’s nothing left to prove. But that’s another discussion for Silva to have with his family and team on another day. For now, get well Anderson.

It’s probably not the right time to say you feel bad for Chris Weidman when the man he defeated, Anderson Silva, is coming off surgery to fix his broken leg, but that won’t stop me. Let’s face it, there are those who believe that the middleweight champ’s first win over the all-time great was a fluke, and there is no question that Saturday’s outcome was the result of a freak injury, but let’s look past such foolishness and delve into the facts. In the first fight, yes, Silva got caught by a left hook while showboating and was knocked out. Hey, in this game, if you drop your hands, whatever happens after that is fair play, and Weidman legitimately knocked Silva out, this after a first round in which he had success in taking him down and nearly locking on a submission hold. In last weekend’s bout, Weidman had a dominant first round, nearly knocking Silva out with a right hand early on, and then following that up with some solid ground and pound work. Was he on his way to a second decisive win? We’ll never know, but the odds were looking good before Silva’s injury. Bottom line, there are really no flukes in this sport, not at this level, and if you don’t think Weidman is a legitimate champion, you better get used to him because it looks like he might be sticking around for a while.

If you didn’t know Ronda Rousey was a star before, after her UFC 168 win over Miesha Tate, it’s clear that in a post-Georges St-Pierre world, she’s got the charisma, skill, and polarizing personality that can attract not just the hardcores, but a new fanbase of casual fans who just want to see what the fuss is about. Of course, her newly announced UFC 170 main event against fellow Olympian Sara McMann will go a long way toward in seeing how many of the fans she brought in to The Ultimate Fighter and UFC 168 will follow her forward. And if we’re going by her performance at the MGM Grand, suffice to say that there was an electricity in the arena for both Rousey and Tate, and both showed once again what the ladies can do on the biggest stage in MMA. But Rousey isn’t just a ticket seller; she’s a special athlete and her trademark armbar is one of the most dangerous weapons in all of sports – past or present. Does that mean she’s unbeatable? Not by a longshot. No one in this game is invincible, yet Rousey has that aura that says ‘when I want to finish you, I will finish you.’

As for her refusal to shake Tate’s hand after the bout, Rousey has taken some heat for that, but as she told me before the fight, “Some people call that being a bad sport; I call that being consistent.”

Miesha Tate shouldn’t hang her head after the loss though, and she didn’t just give Rousey a rougher go than in their first fight in Strikeforce, but at times she looked to have the tools to pull off the upset. And it goes without saying that despite being nicknamed “Cupcake,” Tate is as tough as they come, and she’s got plenty of interesting matchups in the division as she works her way back up the bantamweight ladder.

I’ll admit it; I thought Josh Barnett was going to be Josh Barnett on Saturday night, closing the distance on Travis Browne, taking him down and submitting him. Unfortunately for “The Warmaster,” Travis Brown was Travis Browne, a ferocious finisher whose athleticism and power has to be seen up close to be believed. That was a knockout I did not see coming, and it was so fast and final that you just had to shake your head in disbelief. If you didn’t think so before, you have to admit that Browne is the real deal. A fight with Fabricio Werdum in a title eliminator is quite the intriguing matchup, but would you really pick against “Hapa” at this point?

POIRIER’S FIGHTING LIFE
Off the top of my head, I can’t think of a young fighter who lives and breathes this sport more than featherweight contender Dustin Poirier. For him, every fight is just that, a fight, and when it’s time to train, diet, and then step into the Octagon, it consumes his being. That intensity and emotion can sometimes cost you, but as he matures as a fighter, the Louisiana native is honing it to a fine edge, something evident in his stoppage of Diego Brandao. Incensed by some pre-fight interactions, not to mention Brandao not making weight (or even coming close), Poirier channeled that fury into a ferocious finish of a quality foe riding a three fight winning streak. 2014 is going to be an interesting one for “The Diamond.”

LEBEN’S SWAN SONG
After Chris Leben retired in his corner after the first round of his bout with Uriah Hall, “The Crippler” has taken to social media to wish Hall well and write that it’s been a good run, all but coming out and saying that at 33, he’s going to retire. He did hint at it in our pre-fight interview, saying “for me, this is definitely a measuring stick. After this fight, win, lose, or draw, I’m gonna have some thinking to do, one way or another,” and he may have had that talk with himself. This is the tough part of combat sports, because very rarely, if ever, does a fighter leave on top of the world with a title belt in hand or a long winning streak in his back pocket. In boxing and in MMA, retirements are almost forced on you, and that’s sad. But if Leben does walk away from the game, I won’t remember him for last night, but I’ll remember him bursting on the UFC scene with a five fight winning streak, his ability to often snatch victory from the jaws of defeat, his classic with Yoshihiro Akiyama, and the personality that made you like him every step of the way. Leben was a fighter through the ups, downs and sideways of this sport and his life. You could always count on him for that, and hopefully he remains involved in MMA, as up and coming fighters could learn a lot from him when it comes to dealing with the pitfalls of being a pro athlete.

JOHNSON GETS HIS GROOVE BACK
TUF 12 finalist Michael Johnson always had talent. Putting it together on a consistent basis, both during a single bout and on a fight-to-fight run, has been the issue for him, despite a three fight winning streak in 2012 that made it look like he had turned the corner. Two losses slowed him down, but now with back-to-back wins over Joe Lauzon and Gleison Tibau, Johnson is not only showing frightening consistency, but he looks like he’s ready for a top ten challenge next year. And if he passes that test and gets his confidence, consistency, and talent on the same page, watch out lightweights.

THIS AND THAT
New Jersey’s Jim Miller returned to the win column for the first time in a year with his submission of Fabricio Camoes, and it was the kind of victory that reminds you just how dangerous the gritty lightweight can be. Here’s hoping for some more big fights for Miller in 2014…Dennis Siver put on his hard hat, went to work, and picked up another win over Manny Gamburyan, keeping him relevant in the featherweight division. In 2014 though, Siver’s got to be able to prove that he can win the big one against elite competition at 145 if he wants to eventually get into the title picture…John Howard has had one of the better comebacks of 2013, as he’s returned to the Octagon with wins over Uriah Hall and Siyar Bahadurzada. And while the jury’s out on whether “Doomsday” can take things to the next level next year, in a division left wide open by the hiatus of Georges St-Pierre, a couple more wins can propel Howard has as good a shot as anyone at making some significant noise…William “Patolino” Macario didn’t look like himself in the TUF Brazil 2 finale earlier this year, but against Bobby Voelker at UFC 168, he had his mojo back, showing off the power and grit people sawfrom him on the show and when he was coming up on the Brazilian circuit. Is he still a raw talent? Definitely, but the key word there is ‘talent,’ and he’s got it…Most fighters hear their cornermen tell them they need a knockout and they nod and go back to the previous game plan once the bell rings. Not Robbie Peralta, who broke open a close fight with his thunderous fists, knocking out Estevan Payan in the third round. Now that’s a good student…