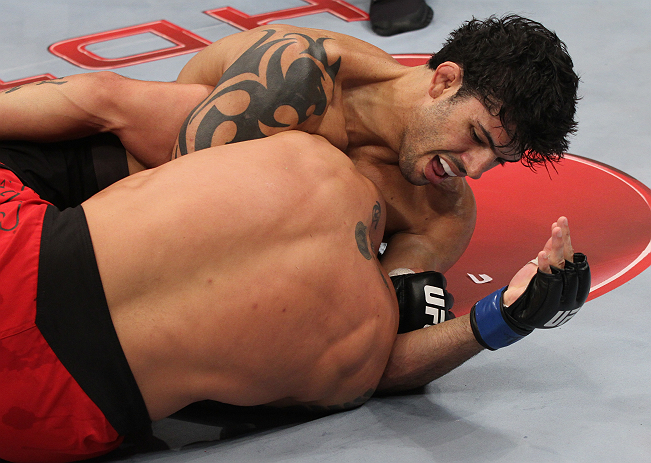 If there's one standard that you can always depend on when the UFC travels to Brazil, it's that there are plenty of young and hungry Brazilians filling the card.

This time around is no exception, with the preliminary card for UFC 163 littered with talented fighters from Brazil, including former Ultimate Fighter finalist Vinny Magalhaes, who fights in his native country for the first time ever, while grappling ace Rani Yahya also gets back in action.

The bantamweight women will also be featured on this card, with Amanda Nunes making her UFC debut against "The German Tank" Sheila Gaff.

Which fights on the undercard are the biggest locks? Which ones could end in an upset? Today's fantasy preview has all that and more.

1)    Anthony Perosh asked for a fight against Vinny Magalhaes, but that may backfire on him when the two light heavyweights face off in Brazil. Perosh is known for his grappling acumen, and has seven career submission victories. He earned his black belt in Brazilian Jiu-Jitsu and is a multi-time qualifier for the vaunted Abu Dhabi grappling championships. The only problem? Magalhaes doesn't just qualify for those tournaments—he wins them.

Magalhaes has to be considered one of the two or three best grapplers in all of MMA, and if he gets this fight to the ground, Perosh is in trouble. Magalhaes has to be aware of Perosh's striking, because this is MMA and not a grappling competition, but lucky for him that's not what either of them are known for doing. Magalhaes will drag Perosh down early, before either fighter can break a good sweat, and he'll look to take an arm, leg or neck back home with him to Las Vegas when the fight is over. Magalhaes should put this one away early and could pull off something flashy to do it.

2)    Two strikers will meet looking for the knockout at UFC 163 when Amanda Nunes takes on Sheila Gaff on the preliminary card. In her UFC debut, Gaff didn't get much of a chance to show off her striking chops after being taken down by Olympic wrestling medalist Sara McMann. She will get a much better shot this time against Nunes in what should be a great standup fight. Nunes has been somewhat inconsistent in her performances throughout her career, but when she's on her game she's got power in both hands and a slick ground game to match. It also can't be ignored that Nunes is a former featherweight now competing at 135 pounds whereas Gaff moved up in weight after fighting for much of her career at 125 pounds. Gaff is dangerous, especially in close, but Nunes should still have the advantage standing. Nunes could make an impressive splash here, and with her home country fans watching, she's got plenty on the line to make sure she shows up this time around. Since it is her debut, Nunes also earns an extra 40 points with a win.

3)    Don't let Ian McCall's record fool you - he is still one of the best flyweights on the planet. When McCall came to the UFC he was ranked as the top 125-pound fighter in the sport, but a draw and a loss to eventual champion Demetrious Johnson, along with another defeat to perennial contender Joseph Benavidez, and he's staring at an 0-2-1 record through three fights in his Octagon career. It's deceiving, however, judging by record alone, to think that McCall still isn't one of the best in the sport. He's one of the biggest flyweights in the division, and extremely well rounded with a good mix of wrestling and powerful boxing. His losses are only to the best of the best in the division, and in one of those fights (the first bout with Demetrious Johnson), there's an argument that he could have easily won instead of taken home a draw. Iliarde Santos is a veteran of the sport with over 30 fights to his credit, and he's fighting in his own backyard, but it still won't be enough. McCall knows how big this fight is for him, and he knows losing isn't an option, so don't expect him to come and look like anything less than one of the best flyweights in the UFC.

4)    Viscardi Andrade is an interesting fighter to watch as he kicks off the card at UFC 163. As the only member of Team Werdum to make it to the semifinal round on The Ultimate Fighter Brazil 2, Andrade had the weight of an entire team on his shoulders and he was pretty impressive on the show. Andrade mixes a good ground game with solid standup, and his finishes show that as well - he has four career finishes by submission and four by TKO or knockout. Now he's taking on a true veteran in Bristol Marunde, who is gunning for his first UFC win as well, but Andrade is a prospect to keep an eye on, especially fighting at home in Brazil. He will also earn an extra 40 points for making his debut, so this is one hometown kid worth picking.