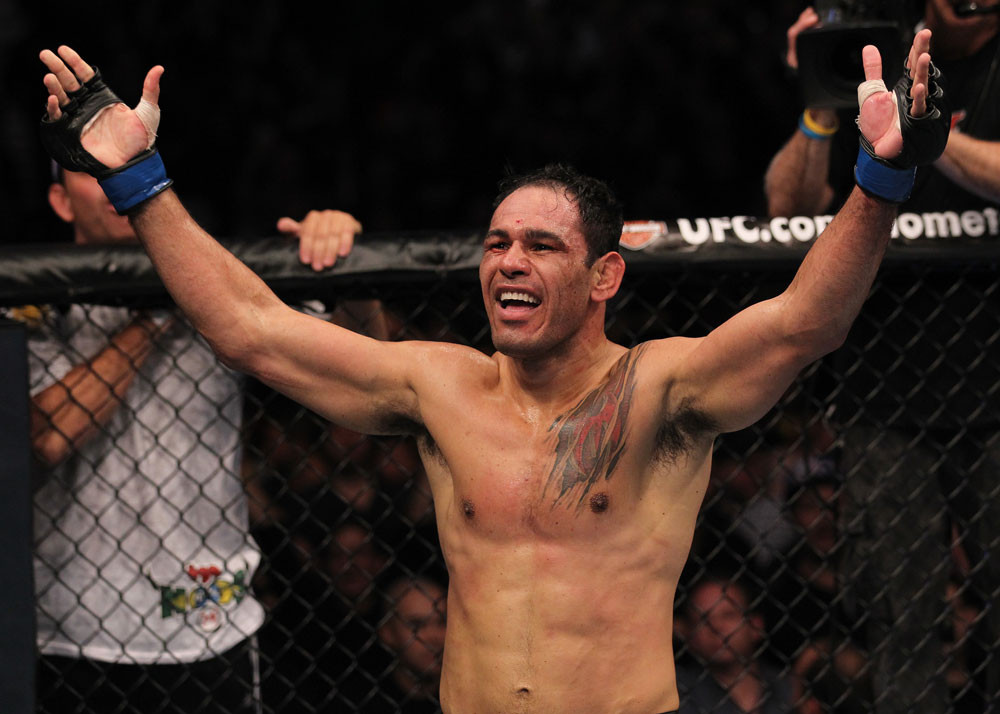 Let’s start with the easy one. Antonio Rogerio Nogueira looked spectacular in his first round knockout win over former champion Tito Ortiz at UFC 140 last Saturday night. It is a rare treat to witness a fighter commit so thoroughly to body shots that he stops the fight with those grossly underutilized techniques. “Lil’ Nog” finally returned to his elite self after a run of three less-than-stellar performances. I have always thought that he had the right blend of skills, heart and experience to challenge for 205-lb supremacy. A win over Ortiz isn’t enough to anoint him a legitimate title contender, but it is a huge step in the right direction.

Rogerio’s heavier twin wasn’t so fortunate, but I think he looked tremendous, despite the loss to Frank Mir. Antonio Rodrigo “Minotauro” Nogueira was certainly winning the fight on the feet, with what appeared to be relative ease, I might add. He simply got caught in a submission once the action went to the ground. There is no shame in being submitted by Mir. The fact that “Big Nog” suffered a broken arm is almost irrelevant to the question of whether he has reached the end of his illustrious career—a question that UFC President Dana White posed after his knockout loss to Cain Velasquez back in February 2010. The all-time great attempted to tap out a split second before his bone snapped. Had he made that decision a few precious seconds earlier, he probably would not be on the mend right now and would instead be campaigning for a quick return bout, since he didn’t otherwise suffer any damage at all in the fight.

For what it is worth, I believe that Rodrigo should be given another opportunity to prove his mettle, once his arm is fully healed. If Mir had brutally knocked him out, I might feel differently. But this guy looked tremendous in his knockout win over tough rising star Brendan Schaub just a few months ago, and he looked great against Mir up until the end. I don’t care whether Nogueira was a shot fighter or if he was put in that position at the height of his PRIDE championship reign, Mir would have finished that fight once he got that kimura locked in just the same. But if he is truly a shot fighter, would he have had Mir’s legs doing funny dances moments before getting submitted? That is the question we should ask ourselves.

ORTIZ WANTS ONE MORE, WILL HE RECEIVE THE OPPORTUNITY?

Tito Ortiz was once the face of mixed martial arts. The “Huntington Beach Bad Boy” was a dominant champion who ruled the light heavyweight division for a record 1,203 days and five successful defenses. Yet, if we are being honest with ourselves, Ortiz hasn’t been a factor in the division since suffering his second knockout loss to Chuck Liddell five years ago. The former champion is now 1-6-1 in his last eight bouts, including back-to-back technical knockout losses.

I don’t know if Ortiz’s history of back injuries has sapped him of his explosiveness and once-dominant wrestling, or if the sport has simply evolved beyond him. Either way, it is difficult to imagine Ortiz as anything other than a healthy underdog against the top half of the UFC’s 205-lb roster. That has to be a tough pill to swallow for the proud athlete and an eye-opening reality for those who want to see him continue fighting in the UFC. Few former champions are able to accept when their time has passed. Liddell faced the same issues. Granted, Ortiz isn’t getting knocked unconscious time and time again. But the fact remains that he has only won once over the last five years. No other UFC fighter has been given that sort of win-loss latitude in the Zuffa era. Don’t get me wrong. I believe Ortiz has earned this sort of star treatment for his body of career accomplishments.

Nonetheless, all great stories have to end at some point, and UFC President Dana White has not been shy in recent years about telling the world that the end was near for Ortiz, if he didn’t turn around his string of defeats. After his loss to Nogueira, Ortiz mentioned that he wanted one more fight, so that he could end his career with a win. Of course he wants that. All the greats want to go out that way. The problem, of course, is that if Ortiz once again tastes victory, it is even less likely that he will be ready to walk away from a sport that made him both wealthy and famous.

But if this was, indeed, the final time that the world will see Ortiz compete inside the Octagon, we should all take a moment to tip our respective hats in respect and appreciation to someone who absolutely deserves to grace the walls of the UFC Hall of Fame once his career comes to an official end.

HALLMAN FIXES WARDROBE MISTAKE, BUT FUMBLES IN HIS WIN NONETHELESS

Dennis Hallman is a grizzled veteran of the fight game. He is a tremendous ground tactician who can defeat just about anybody if the fight largely unfolds on the canvas. But he certainly showed less than sound judgment in his previous UFC bout, showing up to fight wearing blue speedos. On Saturday night, Hallman scored an impressive first round submission victory over John Makdessi via rear-naked choke. It was a dominant performance by a guy who calls himself “Superman.” And much to my delight, he showed up wearing traditional board-style fight shorts.

But, alas, not everything was positive about Hallman’s effort. The man who owns two career victories over Matt Hughes failed to make weight—a major no-no in this sport. In fact, he didn’t even come close. I will admit that I was more than a little surprised when I learned that Hallman was going to compete at lightweight at UFC 140. This is a guy who competed in Strikeforce a couple of years ago at middleweight, and for the past two years, he has competed at welterweight. The drop from middleweight to lightweight is a massive undertaking, one that many athletes simply cannot do, nor should they try.

Hallman is the exception to that rule, in my opinion. While I expected him to show up amazingly gaunt at the weigh-ins and completely drained come fight time, he actually looked great in his almost-lightweight bout. If Hallman can find a way to shed those last 3.5 pounds and still maintain his cardio and strength, then I think he can make very real waves in the lightweight division.

The pay-per-view broadcast of UFC 140 aired four Canadian fighters. All of them lost. Three lost in spectacular fashion. Mark Hominick, undoubtedly the most highly touted of the foursome, appeared to be too hyped up fighting in front of his fellow countrymen. He inexplicably threw a wild, leaping left hook an instant after touching gloves. Chan Sung Jung countered with a perfectly placed right hand. Hominick was knocked out in an official record-tying seven seconds. The way I see it, Duane Ludwig is the real knockout king at four seconds, if Nevada would step up and fix the timekeeper snafu. But I digress.

While you can’t take anything away from the impressive performance of “The Korean Zombie,” Hominick was fighting with an extremely heavy heart due to the recent passing of close friend and trainer Shawn Tompkins, so something tells me that Hominick wasn’t himself in the cage.

Krzysztof Soszynski, the most recognizable of the four thanks to his stint on The Ultimate Fighter, suffered a similar fate, though it took a bit longer. Twenty-seven seconds longer, to be exact. Igor Pokrajac certainly flipped the script of relevance with the win, having now won two in a row and three of his last four in the UFC. Soszynski will now be forced to go back to the drawing board and begin rebuilding his application for 205-lb contender status, just when he was on the cusp of making waves in the sport’s glamour division.

Makdessi was similarly obliterated by Hallman, though once again it took a bit longer. Hallman needed just over half of the first round to force him to tap out. Makdessi was in search of his third straight win, though it wasn’t to be. This guy is a monster striker. He obviously needs to work more on his takedown defense so that he can keep the fight where it needs to be in order to maximize his chance at winning. Despite that fact, there is no shame in getting tapped by Hallman, who is one of the very best grapplers in the division.

Unlike his three comrades, Claude Patrick did not get blown out on the PPV broadcast. In fact, I thought he deserved the nod over Brian Ebersole. Yet, two of the three judges saw it differently, awarding Ebersole a controversial split decision. I’m not sure what else Patrick needed to do in order to secure a win. He seemed to land the bigger shots on the feet, though neither man did much in the standup arena. He also attempted multiple submissions, with more than one appearing to be fairly close to finding its mark. Ebersole, on the other hand, showed crafty grappling ability by surviving each submission attempt. I’m not sure that should be enough to warrant a victory. Maybe that is why I’m not a judge.

Much to the pleasure of the partisan crowd, Mark Bocek and Yves Jabouin each pulled out impressive victories to prevent a clean sweep. The tough results were reminiscent of UFC 58: USA vs. Canada, where the Canadian contingent won a similar percentage of the bouts. Of course, our northern neighbors know that combat competition isn’t about one country versus another. It is about man versus man. The results have nothing to do with the state of Canada’s growing mixed martial arts prowess. After all, one of the greatest fighters on the planet just so happens to be Canada’s first fistic son, Georges St-Pierre.