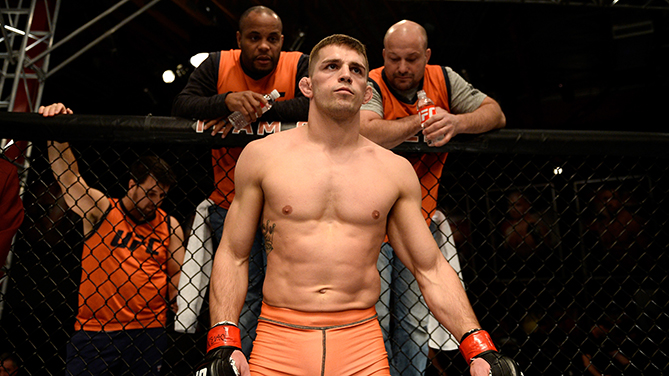 The semifinals are now set after the final fight of the opening round took place on the latest episode of The Ultimate Fighter: Undefeated.

Before Team Cormier's Tyler Diamond squared off with Team Miocic's Dulani Perry, Richie Smullen returned home after suffering a crippling bout of cramps that forced him to drop out of the competition when he was unable to fight Allan Zuniga a week ago.

Smullen said that the doctors revealed that his muscles just broke down thanks in large part to over training throughout the season. As he walked in on a set of crutches, Smullen is still feeling the after effects of the bizarre muscle injury that kept him from competing this season.

"It was a scary experience," Smullen said. "I'm just going to take a bit of time and let my body heal."

With Smullen eliminated, the final fight between Diamond and Perry had to take place before replacements could be named for injured fighters Luis Pena and Ricky Steele in the semifinal matchups.

Diamond, who was the No. 1 overall pick of light heavyweight champion Daniel Cormier, was very confident going into his fight. In fact, Diamond was exuding so much confidence that Cormier had to remind him that anything can happen inside that cage, especially when it comes to The Ultimate Fighter. Perry may not be the most experienced fighter in the house, but Cormier tells him that top ranked middleweight contender Kelvin Gastelum was once picked last when he appeared on the reality show, so appearances can be deceiving.

As for Perry, he was just as outspoken and outlandish as always as he promised to back up his loud mouth with an even louder performance.

"Forget being a good fighter. This is about being a winner in life," Perry said.

With that said, it was time for the final featherweight bout in the opening round of the tournament.

ROUND 1
Perry opens with a pair of sidekicks as Diamond moves forward in rapid fashion as soon as the fight begins. Diamond dives for a takedown and Perry makes an ill-fated attempt to go for a guillotine and he gets slammed to the ground. Diamond begins working a ground-and-pound attack with some clubbing elbows while Perry holds onto his guard from the bottom. Perry attempts to scramble free with a submission attempt but Diamond is able to wiggle free and advance his position. Perry gets back to butterfly guard but Diamond is very heavy on top as he continues to rain down punches and elbows. Diamond passes to half guard as he continues his assault on the mat with punches blasting away at Perry, who is just stuck against the cage. Diamond is punishing to the body and head as he maintains control and opens a cut on Perry's face. Diamond advances again, looking to get to side control as he starts hammering away with knees to the body. Perry makes one explosive attempt to get free but Diamond is relentless and refuses to let him up from the ground as the round comes to an end.

ROUND 2
Perry opens with another kick and he slips to the ground and falls to his back again. Diamond is quick to follow him to the mat as he begins to systematically break down Perry's defense a second time. Diamond advances into half-guard while peppering away with short punches and powerful elbows on the inside. Perry again attempts to roll free and reverse position but Diamond is in complete control of his body. Diamond eventually works his way into side control as he continues to pepper away. Diamond finds an opening for a guillotine choke and immediately rolls to get the submission. Perry is quick to tap out as the fight comes to an end in the second round.

Diamond punches his ticket to the next round while Perry admits that he's still got a lot of work to do, especially when it comes to his ground game.

Now with the final fight in the opening round completed, it was time for UFC President Dana White to sit down with the coaches to determine the replacements for the injured fighters and then for the semifinal round matchups to be announced.

After sitting down in White's office, Cormier found out rather quickly that neither of the fighters from his team would be considered for the replacements. White said bluntly that he wasn't interested in Thailand Clark or Richie Smullen, so that meant the replacements would have to come from Team Miocic.

As for the lightweights, Team Miocic had two options - John Gunther and Jose Martinez Jr. - and the heavyweight champion opted for his fellow Ohioan to get a second chance. Gunther barely got warmed up in his fight before he was choked unconscious and he's been itching for a second chance ever since.

With Cucciniello and Gunther both on board, White made the decision on the semifinal matchups:

Next week will see the first semifinal round matchup as a pair of fighters from Team Miocic square off when Mike Trizano takes on the returning John Gunther. Miocic has already said he's bowing out of coaching either fighter and will instead spend his time on the sidelines rooting both of them on.

Who will be the first finalist on The Ultimate Fighter: Undefeated? Tune in to next week's episode to find out.