The latest episode of The Ultimate Fighter: Undefeated ended with several shocking moments, with one athlete being eliminated from the competition due to injury and another knocked out of the tournament without ever stepping foot inside the Octagon.

The drama started to unfold in the aftermath of the previous episode when Ricky Steele earned a unanimous decision victory over Suman Mokhtarian to move into the next round of the tournament as a representative of Team Cormier.

Unfortunately, after the fight was finished, Steele was barely able to limp to an awaiting car that took him to a local medical facility to get checked out thanks to an injured foot. According to Steele, he's had surgeries to repair damage on his left foot previously but that remains one of his primary weapons, so he used it to help win the fight but it left him damaged after the battle was over.

The good news for Steele was that the x-ray revealed no fractures whatsoever in his foot, but it was still bruised up rather badly, so he would have to be on crutches for several days. What didn't go so well was Steele dealing with the aftereffects of a two-round battle where he exchanged some heavy shots with Mokhtarian on the feet as well.

The day following the fight saw Steele worse for wear as he was barely able to crawl out of bed, with teammate Bryce Mitchell making him some breakfast and trying to offer him some words of encouragement after such a rough start to his day. While his body was still healing, Steele's bigger concern was a potential concussion suffered during the fight, which would undoubtedly knock him out of the competition.

"I'm in bad shape right now, there's no doubt about that," Steele said about his condition. "If I feel like I can fight, I'm going to fight."

The symptoms plaguing Steele included an aversion to light or loud noises, which can both accompany a concussion. At practice the next day, with Steele on crutches while wearing sunglasses in doors to help shield his eyes from the lights, head coach Daniel Cormier said that enough was enough and that he had to see a doctor.

Cormier's argument was that no matter how much Steele wanted to fight, it wasn't worth risking his long term health, especially when it came to head trauma.

Steele got checked out by a neurologist, who returned with some good and bad news. The good news was an MRI scan showed no serious damage done to Steele's brain as a result of the fight with Mokhtarian.

The bad news was that Steele also underwent cognitive testing, which goes along with concussion protocols, and the results showed signs that it wasn't going to be safe to allow him to continue in the competition. With that, Steele's dream of winning The Ultimate Fighter: Undefeated came to an end as he had to tell his coach and teammates that he was out of the competition. 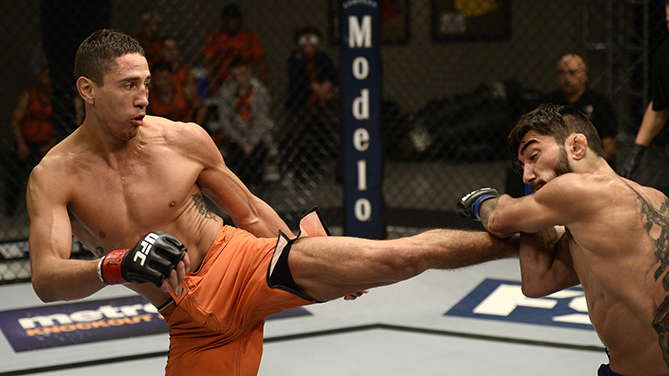 Steele joins fellow Team Cormier fighter Luis Pena on the sidelines after Pena was forced out of the tournament due to an injured foot following his win earlier in the season.

With the semifinal matchups being announced next week, there are now two fighters who have to be replaced, with both Steele and Pena being deemed medically ineligible to compete.

The other stunning moment that took place this week came in the final lightweight matchup in the opening round of the tournament, as Team Cormier's top seed Richie Smullen was preparing to take on Team Miocic's Allan Zuniga.

Smullen was considered one of the favorites to go deep in this tournament, coming out of the SBG gym in Ireland where he trains under head coach John Kavanagh and alongside training partner Conor McGregor. Smullen is a submission specialist with heavy hands and Cormier was touting him as a guy so good that he could take out Zuniga and still have enough left in the tank to face another Team Miocic fighter later that same day.

Zuniga, who hails from Costa Rica, was definitely a major underdog going into the fight despite having 13 professional wins on his record. The worry about Zuniga was the level of competition that he had faced before coming to The Ultimate Fighter, and Smullen definitely seemed like his toughest opponent to date.
RELATED CONTENT: Get to know Alan Zuniga | Episode 6 Recap

Still, Zuniga didn't seem the least bit rattled in the hours leading up to the fight, as he was prepared to leave everything in the cage to help realize his dreams of competing in the UFC and giving a better life to his family back home.

As for Smullen, he was fighting for his daughter back home in Ireland, who was still an infant when he left to film the show in Las Vegas.

As both fighters were warming up in the back, Smullen started to experience severe cramps in the calves of both legs. The coaches quickly tried to work out the cramps, but Smullen could barely stand due to the excruciating pain shooting down his legs.

Cormier eventually asked for more time so that Smullen could work out the cramps in his legs and UFC President Dana White afforded them some leeway while rumors started swirling around the gym that the fight might be cancelled.

Smullen tried everything possible to work out the cramps in his legs but nothing was working, and without him being able to stand up without dealing with debilitating pain, the decision was made that he would not be able to compete.

The fight was called off and Zuniga was declared the winner by way of forfeit as he moved into the next round of the tournament. Zuniga was actually rather emotional afterwards because he wanted to prove himself inside the Octagon instead of just getting a free pass to the second round.

It was a heartbreaking end for Smullen, who is now eliminated from the competition.

With the lightweight fight not taking place, the final featherweight bout in the opening round was announced for next week, as trash talking Team Miocic fighter Dulani Perry will finally get the chance to back up everything he's been saying as he takes on Team Cormier's No. 1 overall pick, as Tyler Diamond finally gets a chance to shine.

Following that fight, Dana White will then consult with the coaches to figure out who is coming back to replace the injured fighters before the semifinal matchups are announced.

Don't miss a minute of it when The Ultimate Fighter: Undefeated returns next Wednesday night at 10 pm ET on FS1.