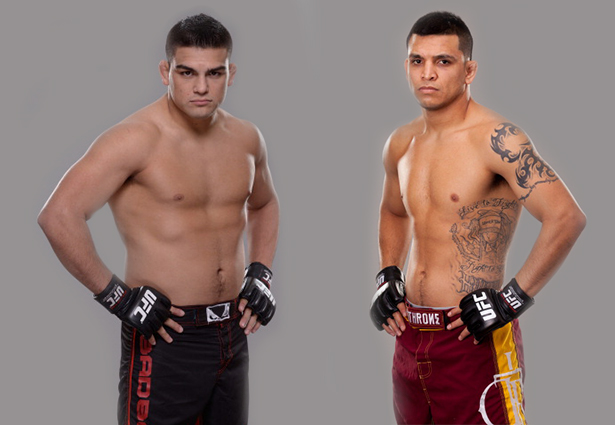 After losing the first pro fight of his career against Tyron Woodley at UFC 183, a bout for which he missed weight the day before, Kelvin Gastelum wasn’t sure what to think when a certain name popped up on his caller ID.

“I saw the name Dana White on my cell phone, and I said ‘well this is odd,’” Gastelum laughs, recalling a call from the UFC President. “I answered and he said ‘well, how would you like to coach The Ultimate Fighter?’ And I said I’d love it, I’d love to coach the Latin American season. I saw it (the first season), I saw all the potential, and I thought it was a great season.”

Another call followed shortly after that for the newest coach of The Ultimate Fighter Latin America, which is currently filming in Las Vegas. That call was from the man he will be coaching against, Efrain Escudero.

“As soon as we found out, I got a call from Efrain and he was like ‘your team is gonna go down and we’re gonna win,’” Gastelum said. “So he’s pretty competitive and pretty excited, and I’m extremely competitive. I’ve known Efrain for a long time and I never want to lose to him in anything, so it’s going to be a fun season for all of us.”

It’s a nice break as well for the 23-year-old Arizonan, a chance to put the Woodley fight and his weight cutting issues in the past while he prepares for his post-TUF fight at middleweight with Nate Marquardt at UFC 188 in June. In the middle, he’ll be leading a host of UFC hopefuls to the next level of their careers.

The winner of season 17 of the reality series, Gastelum was the underdog from the moment he stepped into the house until the finals, and he overturned those odds every step of the way, defeating Kito Andrews, Bubba McDaniel, Collin Hart, Josh Samman and Uriah Hall. It was an inspiring run, and being just two years removed from the show, he has a fresh perspective on what it’s like being in the reality show bubble, something he can pass on to his team.

“I think it helps in a lot of ways,” he said. “I am fresh off the show, and I know how it works. I know what it takes to win it, what it takes to get through it, and I want to help these guys the way I was helped during the show. Another aspect is that I’m living proof that you can go through The Ultimate Fighter and you can be successful if you really want to. That should serve as motivation for these guys.”

After beating Hall to win TUF 17, Gastelum won four straight in the Octagon before the loss to Woodley, but wins and losses don’t tell the full story, as he has also learned how to juggle his personal and professional lives, all while under the glare of the media spotlight. Dealing with that may be the biggest lesson he gives to his fighters, while at the same time reminding them that this life isn’t for those whose sole purpose is to smile for the cameras.

“That’s going to come with time,” he said. “Nobody prepared me for what was coming, but the thing I can try and do is guide them to my best ability and help them in any way that I can. But the main thing is keeping them focused on why they’re there. The Ultimate Fighter house is a different atmosphere, and it’s built to mess with you mentally, and a lot of people react in different ways to different atmospheres and different situations. So it’s going to be interesting to see how I can guide these guys and help them stay focused as to why they’re there and why they’re fighting.”