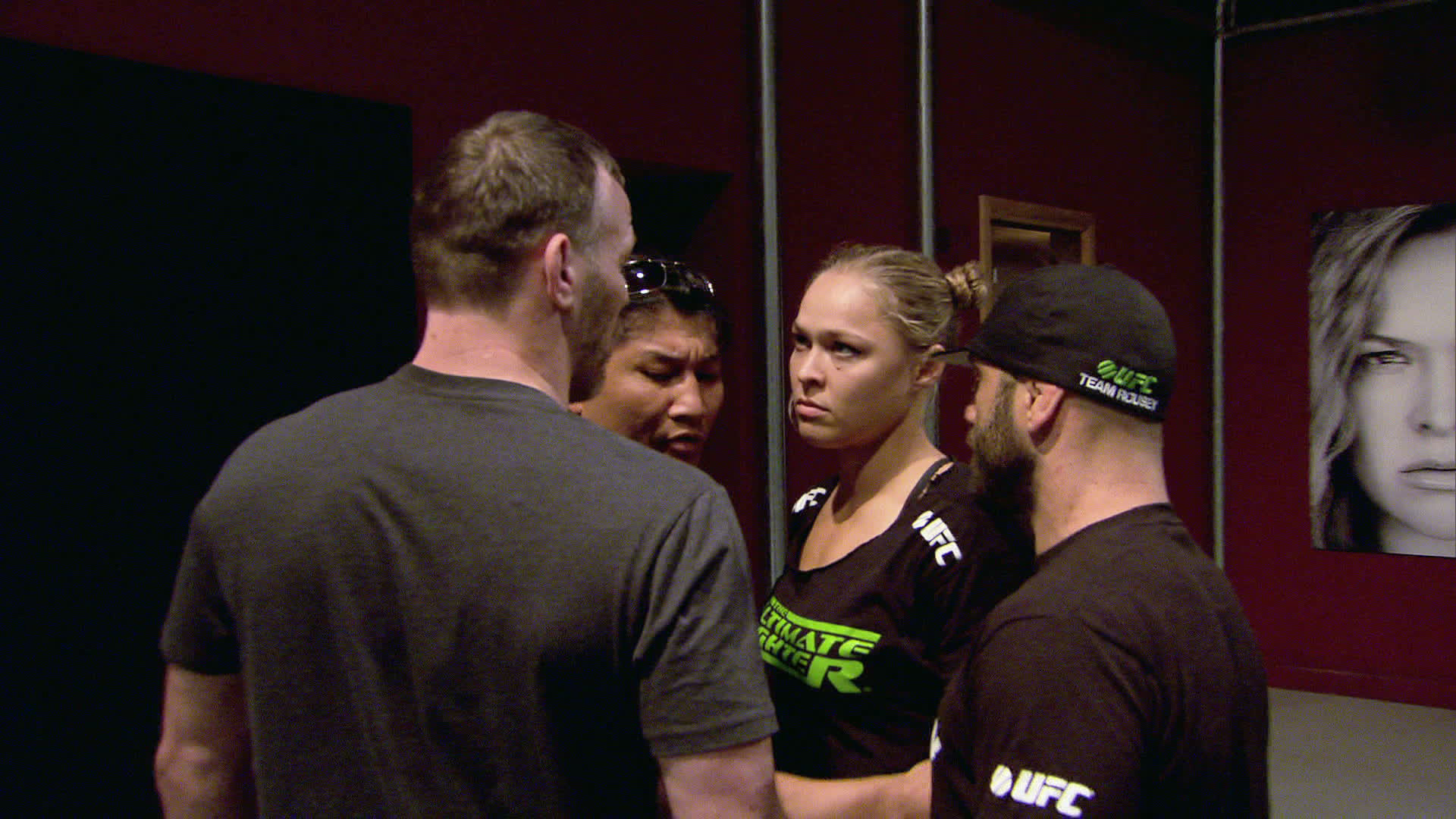 The episode opens in the Team Rousey locker room. Ronda tells us that Jessica has a separated AC joint, but it shouldn’t affect her. We heard the same thing about Chris Beal’s injury last week, so we’ll soon find out if that statement is true. Back in the Team Tate locker room they’re riding high with two wins in a row and believe that Roxanne’s ground game will make this an easy win. Last week we saw our first real confrontation between the coaches and tensions have clearly not eased. Team Tate has brought in former UFC lightweight Dennis Hallman as a guest coach. While there, he has a problem with Ronda’s assistant Edmond Tarverdyan “eyeballing” him. The two have a discussion about the issue, resolve it peacefully and share some of their favorite Las Vegas area restaurants. Actually, upon further review, the two have a verbal confrontation and Hallman asks Edmond if he wants to throw down in the training room. Ronda plays peacemaker, but in her own way. She makes sure Edmond doesn’t get kicked off the show and then proceeds to call Hallman a “bitch” and get right in his face.

Miesha talks about how things have escalated between the two. She says that things started off somewhat reasonable, but once Ronda lost the first two fights of the season, things have become much worse. Dana (like most fans) blames Bryan Caraway for everything. Miesha again admits that Bryan made a mistake but he’s apologized and thinks that everyone should move on from the issue. Dana tries to calm Ronda down in the parking lot and advises her to cool off. “It’s not good for the sport. It’s not good for you.” We’ll see if Dana’s words sink in.

We cut to a Team Tate training sessions where Raquel Pennington vents her frustration with teammate Roxanne Modafferi. Raquel wants to go harder in training whereas Roxy prefers things to be lighter. Raquel feels that she’s being held back and wants to train with the guys 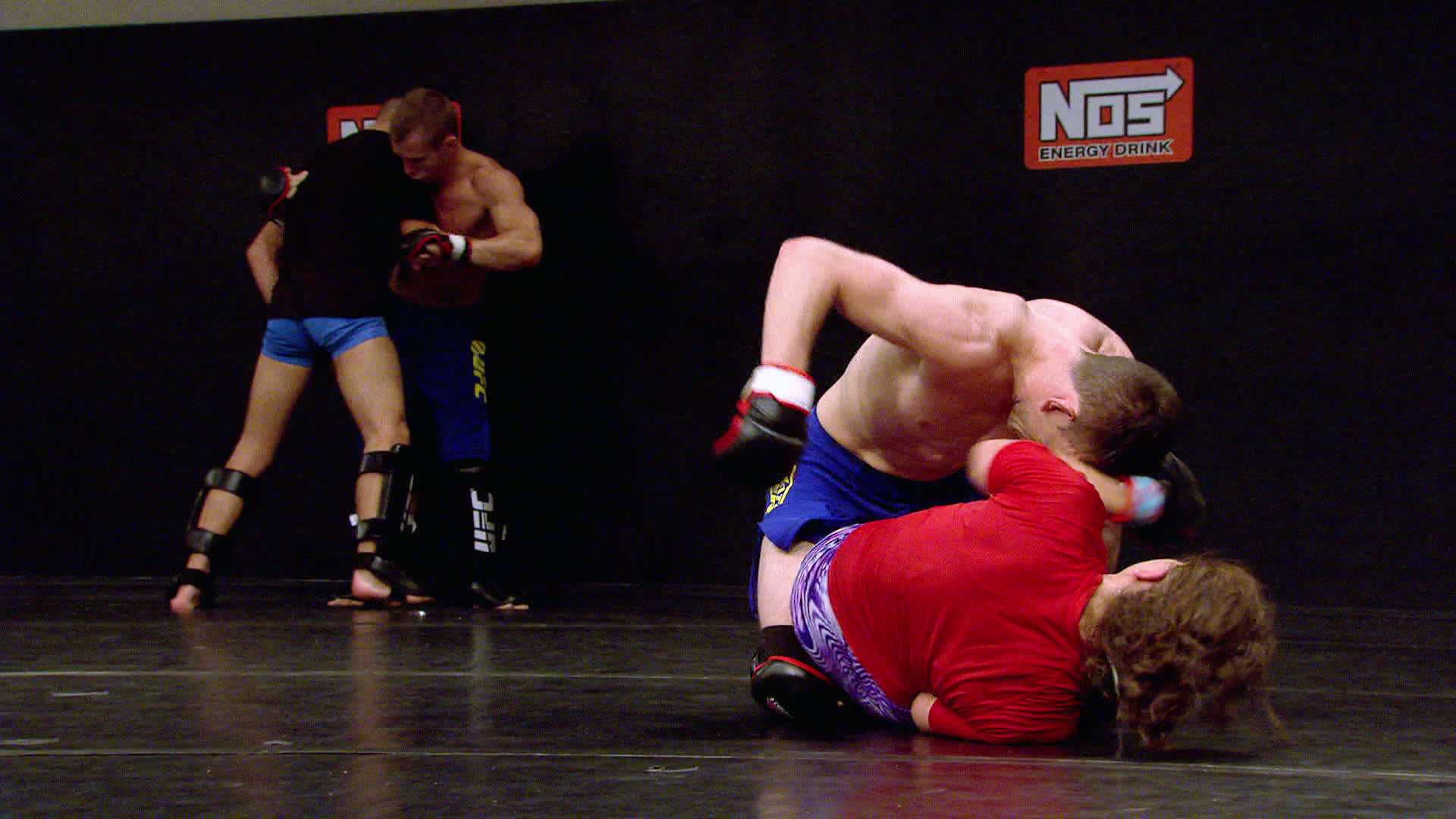 instead. She gets her wish and Team Tate does some inter-gender training. Most of the guys share Josh Hill’s view and while they don’t like sparring with the women, they respect them as fighters. Louis Fisette, on the other hand, feels that Sarah Moras was going too hard so he, “took her down and laid a good beating on her.” I imagine that when Momma Fisette watches this at home she mutters to herself, “This is why he’ll never get a wife and move out.”
Back at the TUF house we see more of the house dynamic. Jessamyn calls Jessica the “momma” of the team. Jessica cooks, cleans and even helps patch up some wounds. David Grant appreciates living in a clean house, just not enough to actually help Jessica out. Jessica says she does all the chores because it irritates her living in a mess. Part of it might be nervous energy, too. She admits that after the team losing the first two fights she feels, “the weight of the team.” More important than the emotional weight, Jessica’s shoulder has been hampering her ability to train properly. Rakoczy dismisses the importance of the injury and warns Team Tate to not think of her as damaged goods.

After a break, we’re back at the TUF house where Roxanne is teaching Shayna Baszler Japanese. Roxanne has been living in Japan the last eight years as an English instructor. As much as she enjoys her life, she dreams of being in the UFC. In an environment where few seem to get along, everyone agrees that Roxanne is a great person. Josh Hill calls her, “the sweetest person in the world,” while Anthony Gutierrez thinks she’s “awesome.” No word on her ranking on the, “Who Gets to Sleep with Anthony,” list.

Nicknamed the “Happy Warrior” and proponent of the benefits of smiling, Roxanne Modafferi began her martial arts life doing Tae Kwon Do at the age of thirteen. She admits she reached a point in her life where she didn’t want to hit anybody so she picked up Judo and Brazilian jiu-jitsu. This grappling heavy focus has been the hallmark of a professional career that’s spanned nearly a decade. 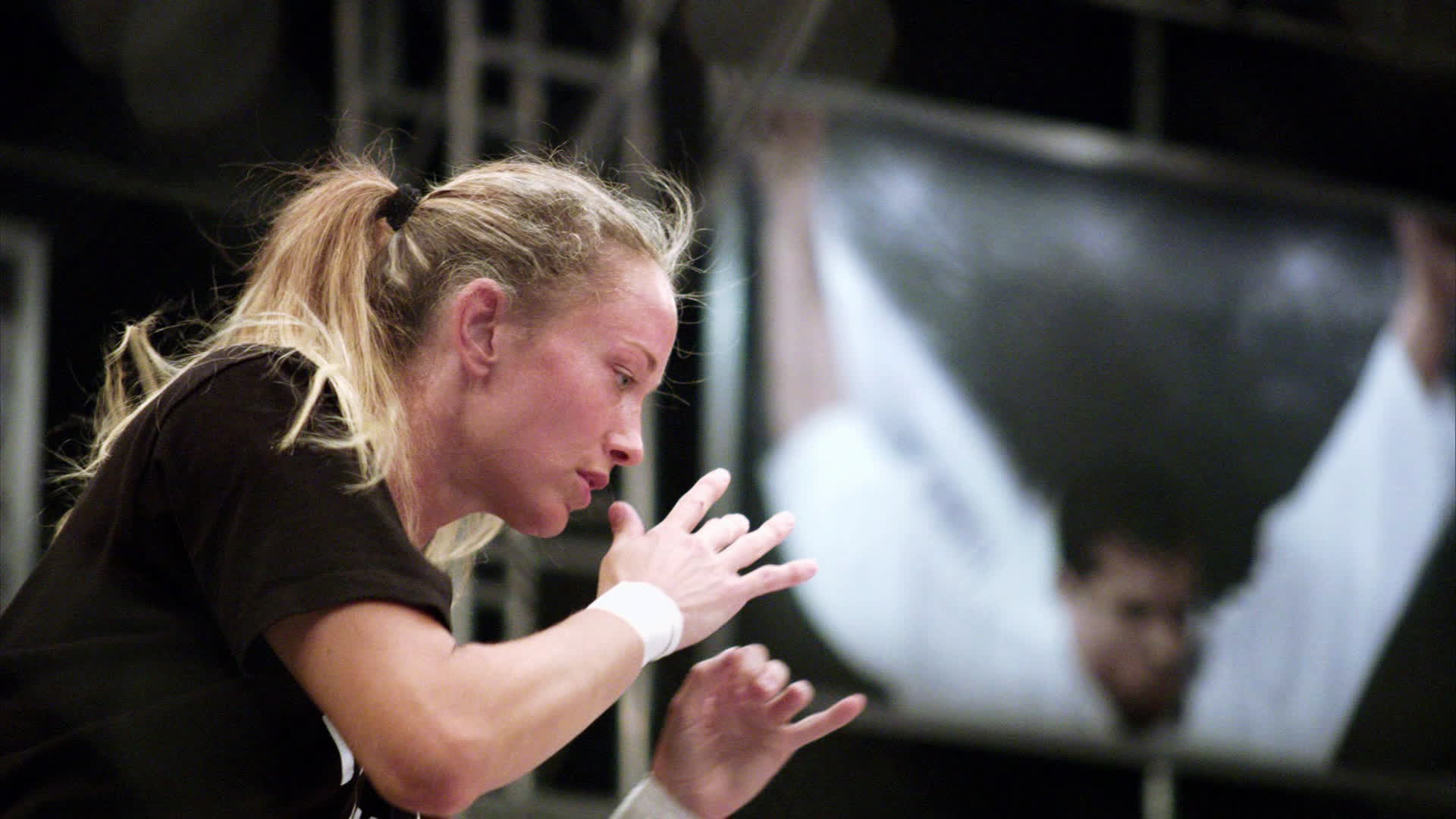 After another break we’re back at the TUF house and we learn more about Jessica’s background. Growing up with an abusive step father, she moved out of the house when she was 15 years old and hit a downward spiral after her mother’s death around Christmas of 1993. She dropped out of school and didn’t care about anything. She found redemption with boxing and credits it with changing her life. After winning eight world titles, she transitioned to MMA. At the age of 36, though, she admits that The Ultimate Fighter is, “my last shot.”

Both fighters weigh in, people hype up their teammate and Roxanne makes a life sized paper towel roll figure. You know, your usual pre-fight rituals. Oh, and remember last week when Chris Holdsworth read Julianna Peña’s note to him aloud and everyone took it as a sign of interest? Well, she gave Roxanne the same thing with pretty much the exact same wording. So while Chris may be disappointed with his romantic chances, I’m just disappointed with Julianna’s limited vocabulary. Roxanne quotes the Jedi Code (the refined version established by Odann-Urr and transcribed by Harmonix Rectonia during the Early Maderon Period to be specific) and it’s fight time!

Jessica opens the round landing low kicks to Roxanne’s inside leg. Her boxing skills are readily apparent as her combinations look crisp and fast. Roxanne eats a cross, but charges forward 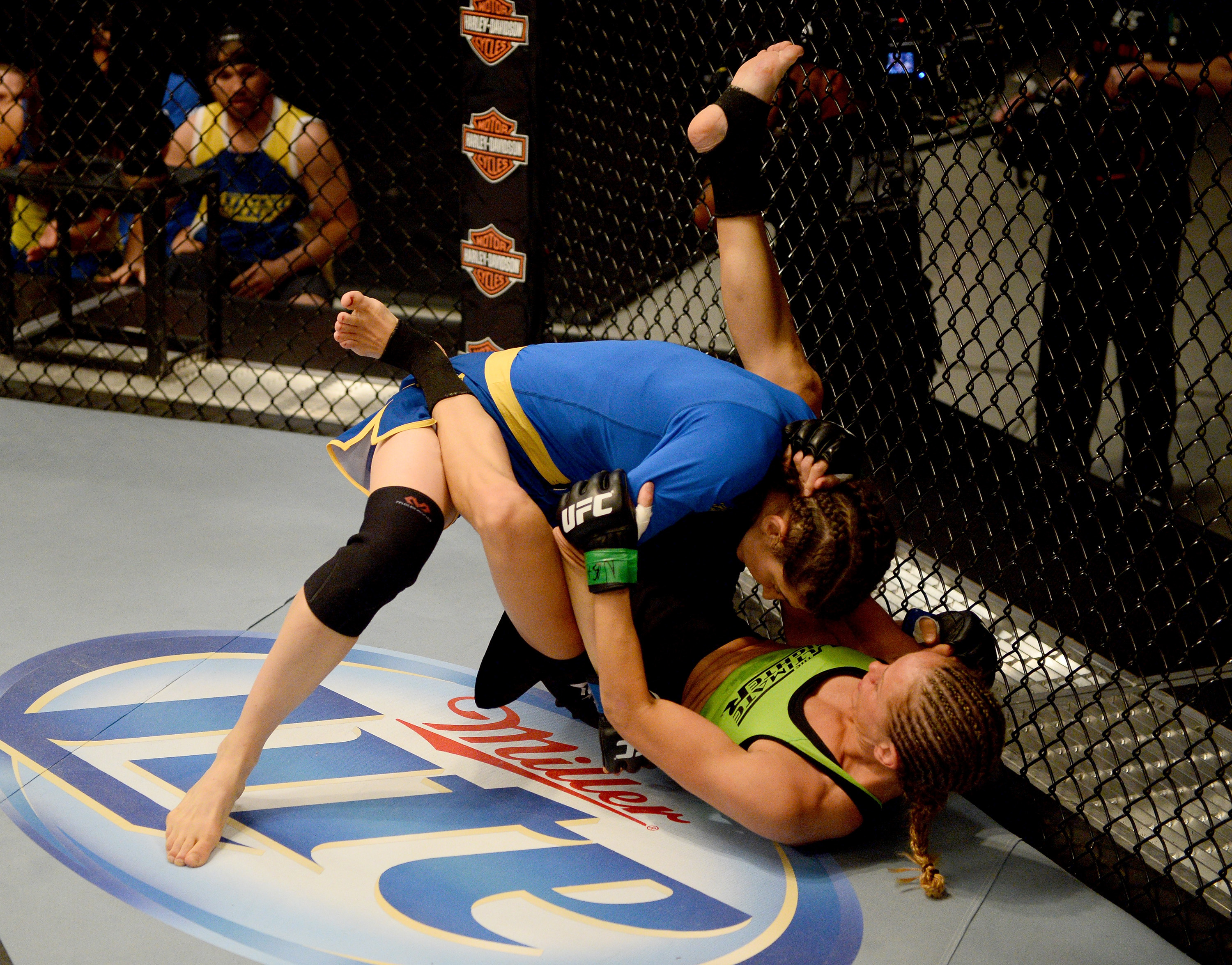 and ends up bringing Jessica to the ground. Jessica separates, but Roxanne continues to close the gap and refuses to let her stand up. Roxanne moves to side mount and holds tight. She seems content to hang out there and doesn’t try to do any damage. Jessica keeps trying to bump her off, but Modafferi’s not going anywhere. Roxanne opens up with some punches and Jessica uses the opportunity to make it to her knees in turtle position. The 36 year old Rakoczy refuses to stop moving and bumps Roxanne over to her back with just over two minutes remaining. Jessica tries to throw punches, but she’s spends most of the time defending Roxanne’s submission attempts. Roxanne goes for a leg lock, but Jessica rolls through and their one their feet in the last minute. Roxanne wastes no time in going for a double leg. Jessica initially defends, but Modafferi is relentless. She keeps pushing and lateral drops Rakoczy to the ground and finishes the round on top.
Round Two

In between rounds Roxy appears to be gassed while Coach Rousey tells Jessica to, “box the [expletive] out of her.” Jessica drops Roxanne early with a right hand. She tries to rush in and finish, but can’t find a way around Roxanne’s guard and submission attempts. Jessica finally heeds her corner’s advice and stands up. Roxanne throws a half-hearted spin kick that’s met with a hard hook from Jessica. Showing that warrior spirit, Roxanne still charges forward and attempts a takedown. Jessica defends the takedown by grabbing the fence. The ref stops the fight, but only gives her a warning.

They restart and Jessica picks up where she left off and scores some hard knees. Roxanne 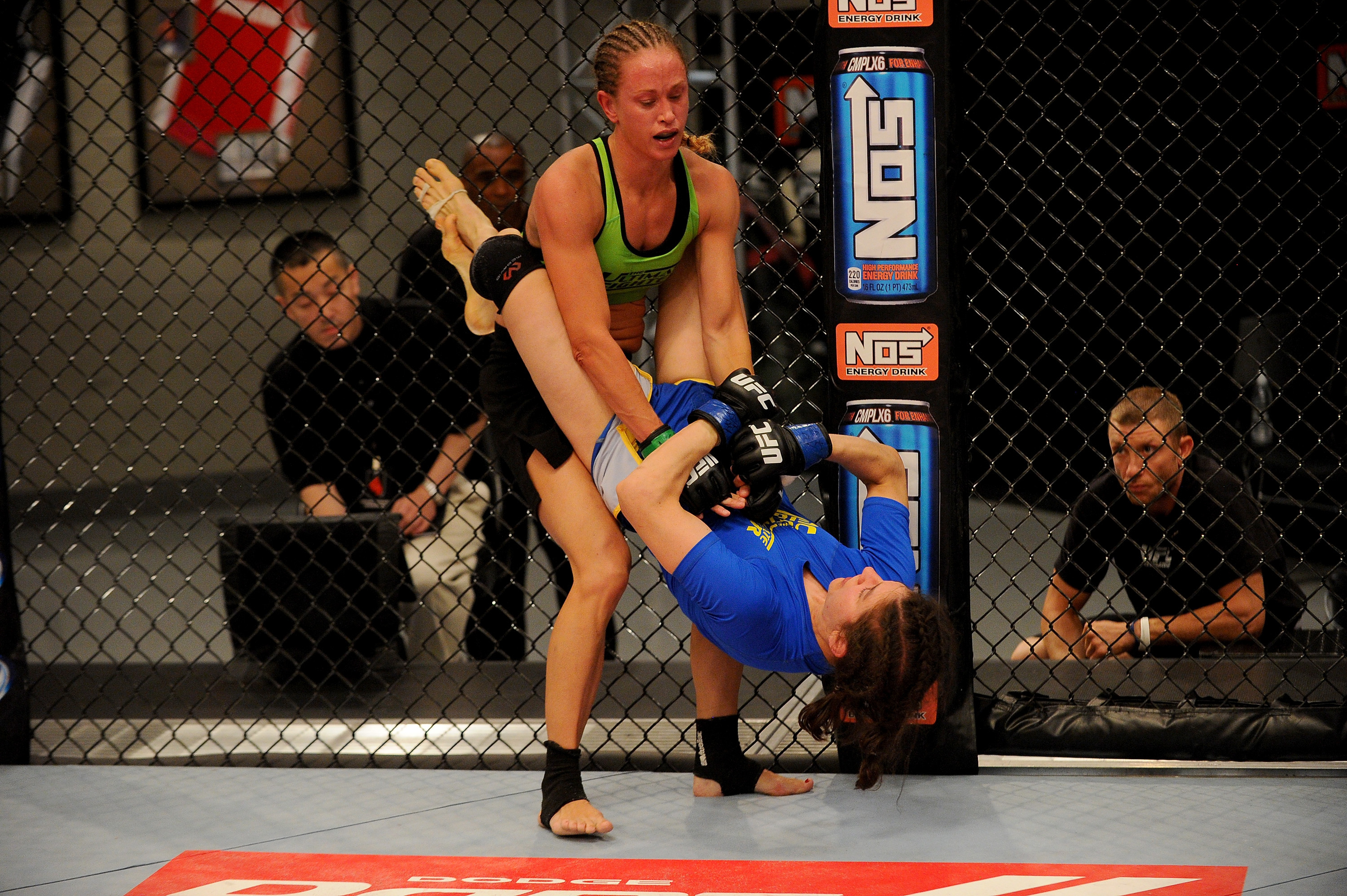 drops for a double and finishes it. She doesn’t have enough energy to control from the top and Jessica soon reverses the positions. With three minutes left, Jessica slams Roxanne and it appears to stun her. Jessica brings the ground and pound and Roxanne appears to go out. The ref mercifully stops the fight and Team Rousey has their first win of the season. Jessica is elated and dedicates the win to her son that she had to leave behind to be on the show. Roxanne is an unhappy warrior and lets loose a primal scream of grief. Shayna Baszler comes over to comfort her. “More than anyone else in the house I know what she’s feeling.” They’re both longtime veterans of WMMA and this was their chance to earn some recognition and the opportunity has been squandered.

It’s time for the fight announcement and Team Rousey chooses David Grant to take on injury replacement Louis Fisette. The show then wraps up with a preview of next week.

Can Louis Fisette redeem himself? Which fighters are struggling with making weight? Will Ronda’s mom show embarrassing childhood pictures? Find out this and more next week on The Ultimate Fighter!