Tensions simmer for Jedrzejczyk, Kowalkiewicz ahead of UFC 205 clash 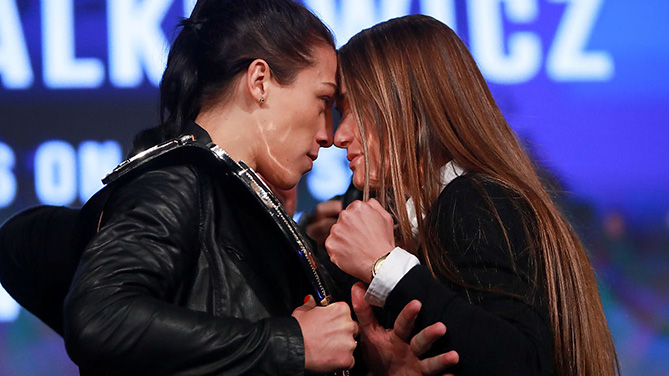 The tension that has simmered between Joanna Jedrzejczyk and Karolina Kowalkiewicz, two Polish superstars now set to vie for the strawweight title at UFC 205, wasn’t evident at Tuesday’s on sale press conference until the staredown.

During the press event at a packed Madison Square Garden, Jedrzejczyk had nothing but nice things to say about her compatriot and next opponent. It was a brief respite for the champ from what’s been an uncomfortable attitude toward Kowalkiewicz, who would bristle at the mere mention of her name in recent months.

Initially Jedrzejczyk felt Kowalkiewicz had more work to do to secure a title shot. But in the end she wanted NYC and Kowalkiewicz was next in line.

“I wanted to fight on this card so badly. I was asking Dana (White) so many times. I’m finally here and I’m happy to face Karolina in New York,” Jedrzejczyk said.

Jedrzejczyk’s eagerness to compete at UFC 205 in New York City is a two-part plan: She’s been intent on fighting on the biggest card in UFC history and in a city with a huge Polish population that will be invested in both fighters on Nov. 12.

“See, the thing is I asked for Karolina. She beat Rose (Namajunas) in her last fight so she’s here. Polish ladies rule the world,” Jedrzejczyk said.

Other than UFC megastar Conor McGregor, Jedrzejczyk may have received the second-largest crowd pop during the press conference. That’s an impressive feat considering hometown boy Chris Weidman was present after getting added to the card early Tuesday morning.

Kowalkiewicz has been studying Jedrzejczyk for years now and thinks she knows how to bring down the dominant 115-pound queen.

“I am ready for this fight,” she said. “I work for this and I can’t wait because my dreams come true. Joanna is the best in the world and I want to fight with the best.”