Before the fighters hit the scale for the UFC 245 ceremonial weigh-ins on Friday, the combatants in the twin championship fights slated to headline the company’s return to Houston, Texas in early February took to the stage to begin setting the table for what should be an electric night at UFC 247.

On one side of the podium sat challengers Dominick Reyes and Katlyn Chookagian, the undisputed top contenders in their respective divisions and the latest emerging contenders to believe they are the ones to unseat the dominant figures who reside atop their individual weight classes.

On the other side of UFC President Dana White sat Jon Jones and Valentina Shevchenko, their shiny UFC championship belts resting before them, both already laser focused on their upcoming title defenses and ready to prove that nothing is going to change in the light heavyweight or flyweight divisions on Saturday, February 8 at Toyota Center. 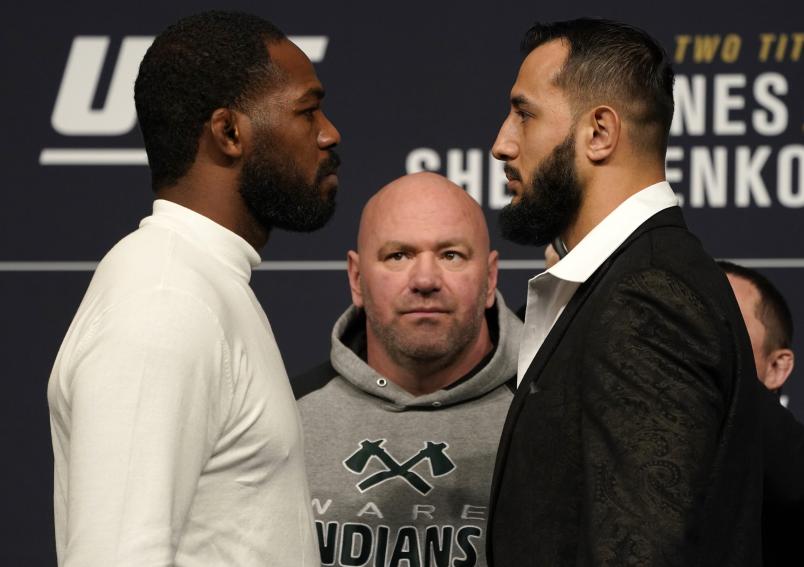 GET YOUR TICKETS TO UFC 247 HERE

“I’m not trying to sound cocky, but I just knew this would come, this would be my next step,” said Chookagian when asked about the opportunity to square off with Shevchenko in the co-main event. “Getting this fight is a long time coming and I wasn’t super-surprised, but I’m excited that it’s here and I’m really thankful for the opportunity.

“She’s hasn’t faced anyone with my style,” continued the Brazilian jiu-jitsu brown belt, who has gone 4-1 in the UFC flyweight division and enters on a two-fight winning streak. “I move, I don’t just stand there and go one-two, one-two running forward like her last few opponent; I utilize a lot of footwork and head movement and I can keep that pace up for five rounds.”

“No offense to Katlyn, but all my opponents, everyone says they think I didn’t face no one with their style,” responded Shevchenko, who knocked out Jessica Eye in June at UFC 238 and returned nine weeks later to score a unanimous decision win over veteran Liz Carmouche to secure her second successful title defense. “She’s a well-rounded fighter, a good striker and she says she knows the ground game, but it’s fine; it’s okay.

While the ladies kept it quick, respectful and focused on themselves, Jones and Reyes had a little more of a back-and-forth, with Jones acknowledging that the undefeated challenger kicked things off by mentioning his prior mistakes and bad decisions following his knockout win over Chris Weidman, which got him excited for the opportunity to share the Octagon with him early next year.

“He started off the whole thing bringing up party favors, bringing up my past and that’s exactly what I wanted and what I needed,” said Jones, who successfully defended the light heavyweight title against Anthony Smith and Thiago Santos in 2019 to push his undefeated streak to a staggering 17 fights. “This guy tickles my pickle and I cannot wait to put my hands on him.

“I just have to go out there, respect him, believe and just do what I do.”

For his part, Reyes seemed completely at home trading verbal shots with Jones on the dais, firing back rapidly when the pound-for-pound great dismissed his undefeated standing and recent first-round knockout of Weidman.

And when he was asked what makes him different than previous challengers who have stepped to Jones with designs on wrestling the light heavyweight title from his grasp, the confident 29-year-old responded with the kind of relentless self-belief that only an unbeaten fighter can possess.

“That’s simple, man: I’m Dominick Reyes,” he said. “I was born in Apple Valley, California. My upbringing was completely different than anybody he’s ever faced. I’m a lifelong athlete playing multiple sports — baseball, football, wrestling, track — and I excelled in all of them and now I’m excelling in MMA.”

The matchup between Jones and Reyes is incredibly appealing and the interplay between the two on stage on Friday evening flipped the switch on the countdown clock tracking the days, hours and minutes until they will hit the Octagon in Houston.

Since returning to action a year ago, Jones has maintained a desire to “make up for lost time” and reward the fans that stood by him through his various issues outside of the cage by fighting frequently and he made good on that promise in 2019.

Jumping back into the cage with a less established, but dangerous talent like Reyes continues that trend, and while the challenger is confident he’s the one to finally unseat the Albuquerque-based champion, Jones believes the outcome will be the same as the last two times he’s shared the cage with an undefeated opponent.

“I do feel like Dominick has everything to win in this situation — he’s relatively unknown — but that’s why I’m training as hard as I can,” said Jones. “I’m taking him extremely seriously. Because he’s unknown, people would expect me to take him lightly, but that’s how guys in my position would fall.

“I’m taking you serious, but you’re a pawn in this game,” he said to Reyes when the challenge suggested he would leave him lying on the canvas. “You’re just a piece in the puzzle. I’m trying to be great and you’re just a part of it. Everyone is undefeated before they fight me. Daniel Cormier was undefeated. Ryan Bader was undefeated.”

“You not special, Dominick,” Jones answered.

“Oh, I am The One; I promise you,” the challenger quickly fired back. “You’ll see.”