The 2012 unofficial awards season continues with the biggest upsets of the year... 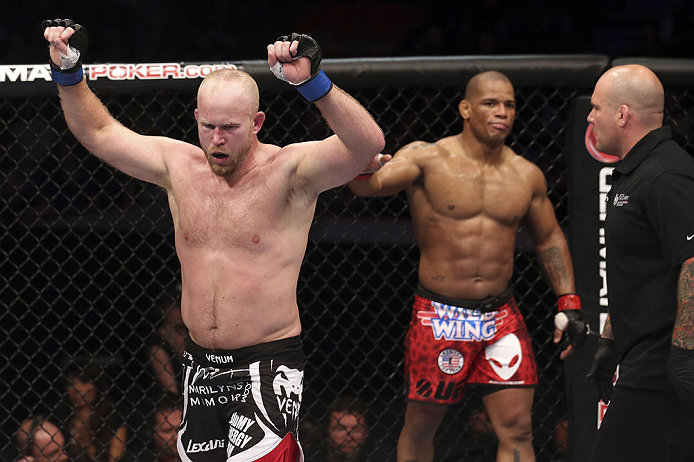 One of mixed martial arts’ most appealing qualities is that on any given night, the underdog can bite back and take out a favored opponent. 2012, like every year, was filled with its share of upsets, and here is this scribe’s unofficial list of the ten best.

10 – Steven Siler W3 Cole Miller - UFC on FX 2
Steven Siler had already taken out one Miller brother, defeating Micah on season 14 of The Ultimate Fighter, but to think he would do the same thing to big bro Cole in March was expected to be a completely different task. Siler wouldn’t be denied though, as he spoiled Miller’s featherweight debut with a competitive, but unanimous, decision win.

9 – James Head W3 Brian Ebersole  - UFC 149
A 12 year “overnight” success, Brian Ebersole quickly became a fan favorite in the UFC thanks to his engaging personality, unorthodox fighting style, and willingness to take on all comers. What resulted were four straight UFC wins, which extended his nearly four year winning streak to 11. But when Ebersole followed up a June win over TJ Waldburger by accepting a short notice assignment against James Head less than a month later, it was as if the “Bad Boy” had stuck his hand in the lion’s cage once too often, as the underrated and unheralded Head was able to decipher Ebersole long enough to take home a split decision win at UFC 149 in Calgary.

8 - Matt Brown KO2 Mike Swick - UFC on FOX 5
Matt Brown was having one of those years when he got the call to face Mike Swick in Seattle on December 8th. Bouncing back from a stretch in which he lost four out of five in 2010-11, “The Immortal” had reeled off three straight wins in 2012, and he was expected to engage in a Fight of the Night battle with the comebacking Swick, who returned to active duty in August with a knockout of DaMarques Johnson. Yet while Swick was the favorite going in, Brown dominated from the start until an emphatic knockout finish in the second round, capping off a spectacular 4-0 run for the year.

7 – Tim Boetsch TKO3 Yushin Okami - UFC 144
One of the top middleweights on the planet, Yushin Okami certainly looked the part for 10 minutes in his UFC 144 bout with Tim Boetsch in February. The ultra-tough “Barbarian” took everything the former number one contender threw at him, but the odds of him coming back to win the fight weren’t too hot heading into the third round. But then Boetsch did what many fighters talk about, but few do: he threw all caution to the wind, emptied his clip and went after Okami in a last-ditch effort to turn things around. And remarkably, it worked, as he stopped his opponent less than a minute into the final round. It wasn’t just one of the biggest upsets of the year, but one of the best comebacks ever.

6 – CB Dollaway W3 Jason Miller - UFC 146
When Jason “Mayhem” Miller returned to the UFC in 2011, he got the push from the organization that marked him as one of the top 185-pounders in the game. But after his stint as a coach on The Ultimate Fighter ended with a dismal defeat at the hands of opposing coach Michael Bisping, his image needed some rehabbing. Enter CB Dollaway, a former TUF finalist who fell on some hard times, losing back-to-back fights via knockout to Mark Munoz and Jared Hamman. It should have been the perfect rebound fight for “Mayhem,” and while he did rock “The Doberman” a few times in their UFC 146 bout, it was Dollaway who controlled things with his wrestling the rest of the way, sailing to a three round unanimous decision victory that ended Miller’s run in the Octagon.

5 – Ricardo Lamas W3 Hatsu Hioki - UFC on FX 4
Ricardo Lamas is not a talker. And in this sport, or any sport for that matter, when you’re not a talker you could get overlooked. That was the case when he entered his June bout with Japan’s Hatsu Hioki, an elite featherweight contender who could have had a shot at champion Jose Aldo, but instead opted to build his Octagon resume a little more. That turned out to be a tactical error, as Lamas lived up to his nickname “The Bully” and roughed up the game, but overpowered, Hioki for three rounds en route to a three round unanimous decision win that shook up an already shook up 145-pound weight class.

4 – Matt Wiman Wsub1 Paul Sass - UFC on FUEL TV 5
Matt Wiman has been one of the UFC’s most underrated fighters for years, so underrated that when he was sent to England in September to face rising star and hometown hero Paul Sass, many expected him to fall victim to one of Sass’ nearly unavoidable submissions. Wiman didn’t get that memo though. Instead, he not only defeated Sass, handing the Brit his first pro loss, but he submitted him as well, just adding to the importance of the win for a fighter who won’t sneak up on anybody anymore.

3 – Jamie Varner TKO1 Edson Barboza - UFC 146
Jamie Varner will probably be the first to admit that when he wore the WEC lightweight championship belt, he was a bit of a polarizing figure among fight fans. But after experiencing some tough times that included not coming over to the UFC when the promotion and the WEC merged, he became more real and more human to a public that always roots for a good comeback story. But practically no one expected that comeback story to include a first round TKO of unbeaten rising star Edson Barboza, who was coming off the Knockout of the Year over Terry Etim. But Varner pulled it off in his first UFC bout since 2007, making it clear that this time, he plans on staying a while.

2 – Ryan Bader W3 Quinton Jackson - UFC 144
In July of 2011, Ryan Bader’s fight career hit its low point. Sure, he had lost his first pro fight against Jon Jones five months earlier, but that was Jon Jones, soon to be the light heavyweight champion of the world. Losing to Tito Ortiz was unacceptable though. Yes, Ortiz was a former light heavyweight champ and future Hall of Famer, but at this point in his career, he had not won a fight since 2006 and his body had betrayed him more than once in the ensuing years. So when the highly-regarded prospect got submitted by Ortiz, it could have been a career-killer for Bader. But the Arizonan is made of sturdier stuff than that, and after he bounced back with a 77 knockout of Jason Brilz at UFC 139, he was matched with another former light heavyweight champ, Quinton “Rampage” Jackson, at UFC 144 in February. The bout was supposed to be a triumphant return to Japan for Jackson, a former PRIDE star, but Bader wasn’t having it, not this time. He was not going to be on someone else’s highlight reel, and while he didn’t finish Jackson, when the 15 minute bout concluded, there was no doubt who the winner was. Ryan Bader was back.

1 – Tim Boetsch W3 Hector Lombard - UFC 149
You might think it’s an indictment of Tim Boetsch to include him, not once, but twice on this list, but it’s not. It’s just that with only two UFC middleweight wins under his belt, beating one of the division’s longest standing contenders (Yushin Okami) and an international star with a 24-0-1 unbeaten streak heading into their bout (Hector Lombard) seemed to be a bit much for “The Barbarian” to chew. It wasn’t, and after his come from behind win over Okami in February, Boetsch made it two for two with an upset split decision victory over Lombard that may not have been as spectacular as the Okami knockout, but it was a win, and Boetsch will take it, as well as the 2012 Upset of the Year award.