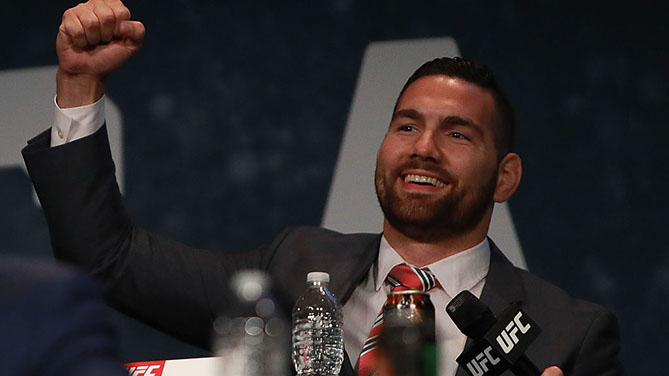 As the former middleweight champion of the world, Chris Weidman knows a little something about making an entrance. So it shouldn’t have been any surprise when the word came down from UFC President Dana White Tuesday morning that Weidman would be facing Yoel Romero on the historic UFC 205 card at Madison Square Garden on Nov. 12.

This, after 11 other fights, including three championship bouts, were already announced.

“Yes, I wanted to make an entrance at the end when no one was expecting it,” Weidman laughs. “If I would have came in earlier, people would have forgot about it, so I had to surprise everybody.”

Weidman was in a great mood later Tuesday as he prepared to head over to the kickoff press conference for the UFC 205 event, and with good reason, as few worked as hard as the Long Island native did to help get mixed martial arts sanctioned in New York. That long fight was won in April, and now “The All-American” is a little over six weeks away from fighting in his home state for the first time.

“I wanted to be here and I felt it was going to happen, and it definitely feels surreal being here right now,” he said. “I go back, thinking about all the work we did to this point, the ups and downs, and to finally be here for a press conference at Madison Square Garden and with a show on the way, it's an amazing feeling.”

But now all the craziness begins. As the New Yorker on the card with the highest profile, Weidman will likely be fielding more than his fair share of media and ticket requests leading up to the bout. The media he’ll leave up to his team and the UFC to handle. As for the tickets…

“I just put it all on my wife,” he laughs. “I'd like to put it out there that I get four tickets, so everybody out in the New York area knows - fans, family and friends. I'd love to give everybody tickets, but I only have four.”

With all the good vibes around the 32-year-old Weidman and his date in the Garden, it’s almost easy to forget that in his first fight since losing his 185-pound crown to Luke Rockhold in December of last year, he’ll be in with a killer in Cuba’s Romero, a former Olympian who has won five of his seven UFC fights by knockout. Weidman hasn’t forgotten.

“He's a talented, athletic wrestler with power in his hands, and he's definitely a tough test for anybody, but I feel like this is gonna be an exciting fight for me,” he said. “To go out there and be able to dominate and get a W over a guy like that will look impressive.”

And that’s all Weidman is thinking about – now, over the next six-plus weeks, and on fight night.

“It's just like any other fight,” he said. “I make that walk and it's like another workout session. I just go out there and have fun, and whatever happens happens.”