After a video displaying the heroics of Summer Tapasa was released, UFC President Dana White celebrated Tapasa by honoring her at UFC 246.
By Gavin Porter, On Twitter @PorterUFCNews • Jan. 18, 2020

When Tapasa saw a man attempting to steal from Best Buy in Hawaii she refused to let him make it out of the store. She jumped in front of the man and repeatedly blocked him by pushing him back.

And while Best Buy wasn’t happy with Tapasa’s heroics, that type of heart and courage is just what UFC President Dana White loves. So White posted the security footage of Tapasa on his social media platforms that racked up millions of views. He also added that he would be flying her out to be his personal guest for UFC 246: McGregor vs Cowboy.

On Friday, Tapasa found herself right in the middle of the faceoff between Conor McGregor and Donald Cerrone at the UFC 246 weigh-ins. It’s safe to say that Tapasa won’t be forgetting this moment anytime soon.

“It has been insane to see the support that I’ve gotten from all over the world. Right after it happened, I never would have guessed that people would care so much about stopping a shoplifter,” Tapasa says. “There has been so much love and I’m just seeing and hearing what everyone is saying and I’m just so appreciative.”

White has made sure that Tapasa has been feeling love by introducing her to some of the biggest names in the sport, letting her face off McGregor and Cerrone and he also hopes to provide Tapasa with a new job.

“First of all, the video was awesome, yet it pissed me off. This woman goes out and does her job by stopping a scumbag from stealing and she loses her job over it,” White says. “You celebrate somebody like that you don’t punish them.”

At first when she was contacted by the UFC and White, Tapasa couldn’t believe it. And now that the moment is here, she wants to soak it all in. 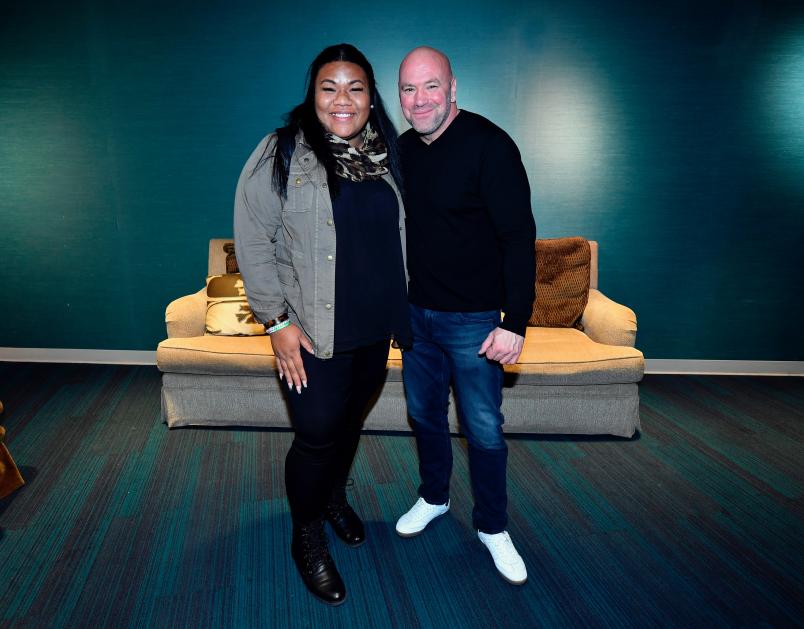 “I know how big of a moment this is, I mean I was just on the stage with Conor McGregor and “Cowboy” Cerrone,” says Tapasa. “While this is all so cool, I also know that it is an opportunity to set myself up for the future, whether that is here in Las Vegas or back in Hawaii.”

White and the UFC make it a priority to assist the community and Tapasa’s story is just the latest example of that commitment.

“We’re very involved in the community and not just here [Las Vegas] but all around and try to do the right thing in lots of different situations,” White says. “It’s about being in a position where you can help people and doing it. When you can, you should, and we do.”