Submissions, KO's, decisions - prelims had it all

Out of action since December of 2013, welterweight veteran Siyar Bahadurzada showed little ring rust in his Saturday return at the MGM Grand Garden Arena, as he submitted Brandon Thatch in the third round of their UFC 196 prelim bout.

There were plenty of oohs and aahs from the crowd in the first round, and rightfully so, as Thatch aggressively fired off kick after kick at his opponent while Bahadurzada flurried back with hard punches to the head throughout the round. The exchanges continued on the mat, Thatch scoring a takedown and looking for submissions, Bahadurzada landing hard shots from the top position.

Thatch got off to another good start as round two commenced, but this time it was Bahadurzada with the takedown, and he piled up the points on the mat until referee John McCarthy restarted the action with three minutes left. Bahdurzada went on to land some knees in the clinch before another takedown. Thatch tried to throw his legs up for a submission, but Bahadurzada’s punches made him reconsider that plan of attack, allowing the Afghanistan native to take the round.

Pulling guard early in round three, Thatch paid for that decision, as Bahadurzada delivered a barrage of hammerfists. After the action stalled, McCarthy stood the fighters up with a little under three minutes to go, but Thatch wasn’t able to get back into a striking rhythm, allowing Bahadurzada to score with the takedown once more. This time, Bahadurzada closed the show, patiently waiting for his chance to sink in the arm triangle choke that prompted Thatch to tap out at 4:11 of the final frame.

Former Ultimate Fighter competitor Nordine Taleb delivered the biggest win of his UFC career, knocking out Brazil’s Erick Silva in the second round of their welterweight matchup.

The first round was an interesting one, more for what didn’t land than what did, as the two combatants threw an array of techniques designed to end the fight with one blow. When it came to the more effective offense though, it was Taleb who was in control for most of the frame, with Silva drawing boos from the crowd after an attempted touch of gloves turned into a punch late in the round.

Silva continued to stalk Taleb in the second, but his defense had plenty of holes, and the Canada product made him pay with a flush right hand to the face that put him on the mat face first. After one follow-up shot by Taleb, referee Herb Dean intervened, with the end coming at the 1:34 mark of round two.

It was an explosive finish to an All-Brazil matchup in the middleweight division, with Rio de Janeiro’s Vitor Miranda knocking out Vila Velha’s Marcelo Guimaraes in the second round.

Guimaraes wanted nothing to do with Miranda’s striking game, clinching up as soon as he got within grappling range. By the second minute, Guimaraes got his opponent to the deck, but only briefly. When the two rose, referee Chris Tognoni restarted the action, but Guimaraes used a wild flurry of strikes to close the gap and lock up with his foe. Miranda tried to strike his way out of the grasp of Guimaraes, but to no avail. At least he got another restart from Tognoni, and this time, he was able to score with several shots on his now tiring opponent.

In round two, Guimaraes’ game plan remained the same, but Miranda had an answer, as his elbows in the clinch broke his opponent’s grip and staggered him. A right head kick followed, and after a couple more blows, Tognoni had seen enough, with the end coming at 1:09 pf the round. 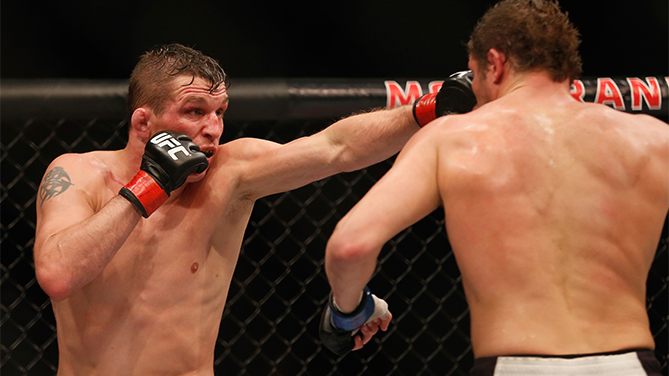 Skelly’s striking told the story of the early part of the opening round, as he landed several jarring right hands on Elkins. The Indiana native soon got close enough for a takedown, but Skelly went fishing for a leg lock and eventually worked his way back to his feet. Elkins, bleeding from a cut on his nose, kept working though, landing some hard knees and punches in the clinch, with the occasional elbow thrown in before the horn.

Elkins scored a takedown in the first minute of round two, and in a scramble was able to get in his opponent’s guard. With the fight now against the fence, Elkins was able to implement his ground-and-pound game. With a little over two minutes left, Skelly rose, but Elkins wouldn’t let him loose, and the two soon went back to the mat, where “The Damage” continued to control the bout.

Fatigued by Elkins’ draining attack in round two, Skelly found himself grounded once more in the third round, and while he got to his feet briefly and fired off some punches at his foe, Elkins was relentless in his pursuit of the clinch and takedown, leading to his clear-cut victory.