“I want to be the first German UFC champion. That really motivates me. This is my fuel, my motivation, to make my fans happy seeing me winning.” - Dennis Siver 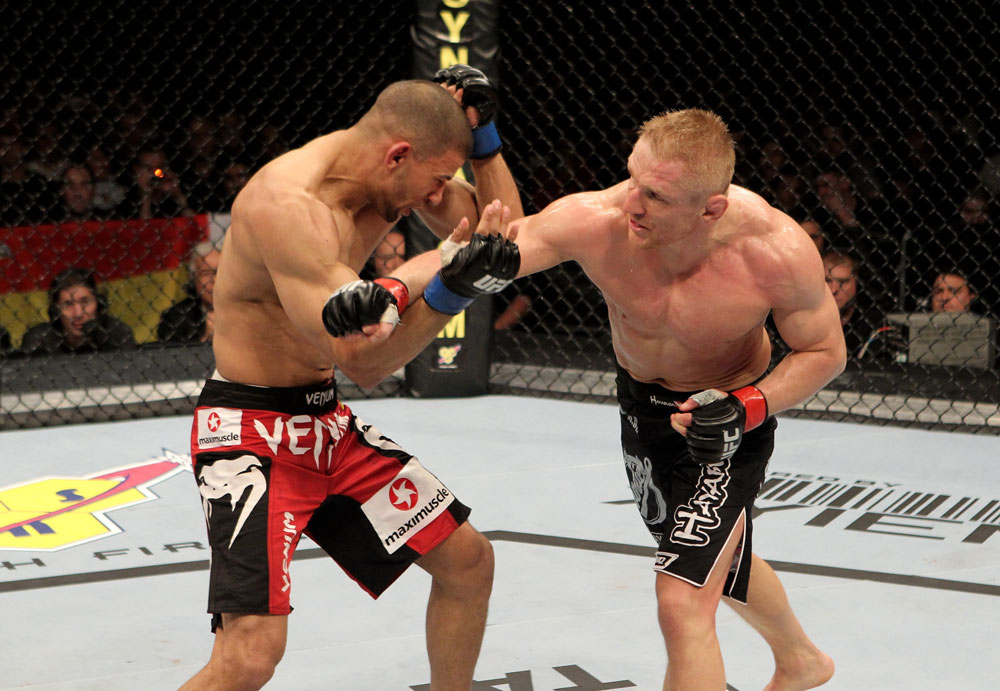 Dennis Siver? Well, he’s still climbing the ladder of notoriety in the land of Volkswagens and BMWs, where the sport of mixed martial arts is still largely treated as second-class citizenry compared to boxing.

“I have never met the Klitschko brothers, unfortunately. I don’t even think they know who I am!” Siver said, days before his UFC 137 battle with Donald Cerrone.

Decidedly low-key, Siver’s aspirations – if achieved – would define his legacy and perhaps make most of his distracted countrymen suddenly take notice.

“I want to be the first German UFC champion,” the 32-year-old said through an English translator. “That really motivates me. This is my fuel, my motivation, to make my fans happy seeing me winning.”

And win he has. To the surprise of many, the European pioneer has ripped off four straight wins, even becoming the first lightweight fighter in the UFC to knock off George Sotiropolous (7-0 in the UFC before Siver outstruck and upset him via unanimous decision at UFC 127). Fresh off a topsy-turvy, nail biting win over Matt Wiman, Siver (19-7) now faces perhaps the most formidable foe of his pro career in Donald Cerrone. Like Siver, Cerrone (16-3, 1 NC) has been red-hot of late, winning five straight in one-sided fashion. The former bull rider’s most eye-opening victory was a TKO annihilation over highly-regarded contender Charles Oliveira.

“Cerrone is a very dangerous opponent because he is able to fight and attack from every conceivable position,” Siver said of the 6’0” Greg Jackson protégé, who went unbeaten as an amateur kickboxer but has submitted 12 opponents in his pro MMA career. “He doesn't tire and will stay on you relentlessly. This is going to make for an exciting and interesting fight. But when an opponent dismisses me, it only motivates me more. The list of those who haven't taken me seriously is long and littered with rude awakenings.”

Siver’s perception of being slighted might be rooted in Cerrone’s pre-fight sentiments.

“I’m not too worried about him, to be honest,” Cerrone said. “I just figure every guy I go up against is going to be tougher then the last. Dennis comes to fight and I expect exactly that. And he better be at his best.”

While many of the world’s elite fighters train in North America or Brazil, Siver (Russian by birth) prefers to sharpen his skills in his adopted homeland. He very much subscribes to the ‘If it ain’t broke …’ mantra.

“I like training with my long-term training partners,” said the stocky striking specialist, who lives in Mannheim, Germany. “I have never said that training in Germany is more effective. I just like staying with my family and friends in Germany and I’m used to my gym and the people there. I'm a big proponent of never changing a winning team. I may not be training with one of the big camps, but my team, Kiboju, under head trainer Nico Sulenta, has helped me get better with every single fight. I get pushed more from fight to fight and it has helped me become a true mixed martial artist.”

Previously an accomplished pro kickboxer, Siver has added to his arsenal with stingy takedown defense, underrated jiu-jitsu and respectable takedowns. A former master car mechanic who can rebuild an engine from scratch, Siver must now find the fix to turn back the challenge of an opponent who will have a decent height and reach advantage.

“No predictions,” Siver said. “I respect Donald, he’s a great fighter. We both like to bang so I sparred a lot. But of course I did my wrestling and BJJ training as well because you never know where a fight will go. May the best man win on the night.”