“I don't go in there and try to point punch the rounds or outwrestle you for points to win rounds - I go in there to fight.” - Dustin Poirier 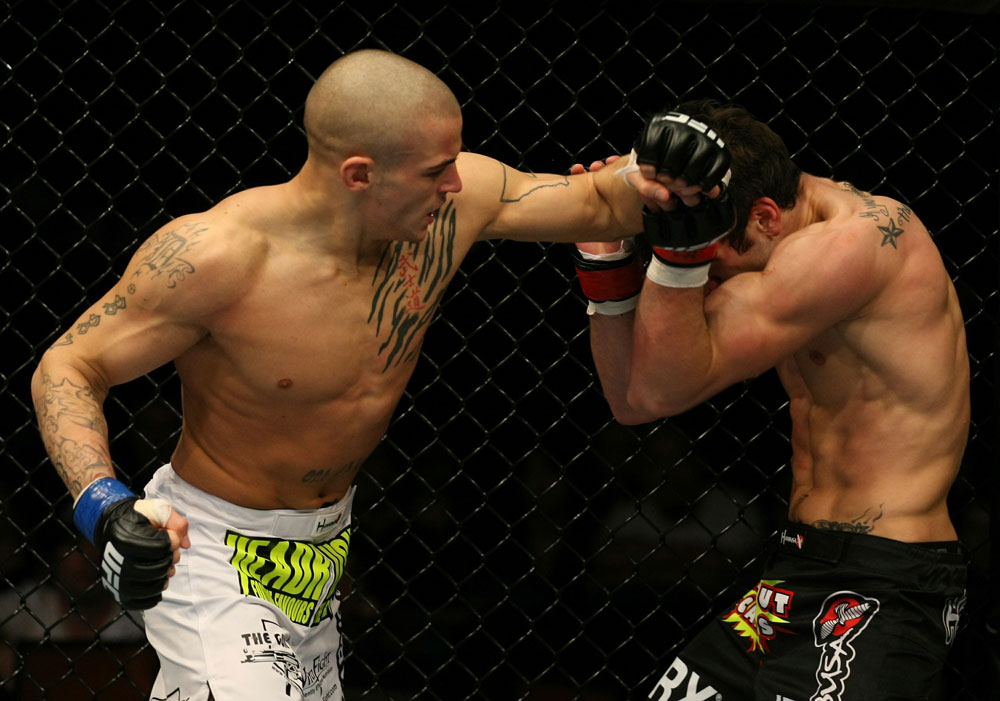 Welcome to the year of “The Diamond”.

On New Year’s Day at UFC 125, the newly christened UFC featherweight championship belt was to be defended for the very first time by title holder Jose Aldo against challenger Josh Grispi. But Aldo was forced to withdraw due to injury, only to be replaced by a UFC newcomer whose debut performance sparkled so brightly that one could have mistaken him for the champion. That featherweight is Dustin “The Diamond” Poirier and, so far, 2011 is his year to shine.

At UFC 131 in Vancouver, Canada, Poirier will be looking to make the second half of this year just as memorable as the first with a win over Jason “Shotgun” Young. In what many, including Poirier, expect to be a savage strikers’ duel, he wants to finish the British kickboxer standing in dazzling fashion. It would be a perfect cap to what has already been a life altering six months.

Poirier, 22, made his UFC presence known with the utmost authority by dominating the former number one contender, Grispi, in a three round unanimous decision victory at UFC 125. Not only was it his UFC debut, but it was also Poirier’s first time fighting at 145 pounds. Only on a month’s notice, he jumped at the chance, knowing what a big win like this would mean for his career.

“It was an opportunity of a lifetime when I got the call,” he said. “When I first got the fight, all that stuff went through my head, but as it got closer to the fight, about two weeks out, I pushed all that stuff out of my head. I can't let myself get overwhelmed with those thoughts that this guy is one of the best guys in the division. But really he is just another guy, just another fighter with a skillset that I have. He's just another opponent. I don't let myself get overwhelmed by his rank or who he is. I just train hard and take every fight seriously.”

Prior to the Grispi fight, Poirier scored a lightning fast 53 second TKO of Zack Micklewright last November, elevating his record to 1-1 in the WEC’s lightweight division. “The weight cut was tough, especially on a month's notice, but I kind of planned on going to featherweight anyway and this was a real reason to do it,” explains Poirier of why he decided to drop the 10 pounds after fighting his entire pro career at 155. “I fought some really good wrestlers and big 155ers in other leagues, but in the UFC these 155ers are so strong and so good I really just thought that for me, 145 is the place to be. I felt a lot better at 145.”

The switch in weight classes appeared to be a flawless gamble for the native of Lafayette, Louisiana, but Poirier sees some discoloration in his diamond of a performance. “I was getting super excited in there, so my technique was getting sloppy and I'm a better fighter than that,” admits Poirier, declaring that his emotions got the best of him when his shots started landing, which prevented him from getting the finish. “I thought I hurt him and I tried to finish him. If I had stayed technical, thrown punches down the middle, turned my hips and used my power that I have, I probably could have finished the fight. If he had thrown a few crisp counter punches he could have caught me because my hands were down.”

The win over Grispi propelled “The Diamond” into the limelight of the UFC. Meanwhile, Poirier’s stardom was only just beginning. In February, the trailer for a documentary entitled “Fightville” stormed the internet as the movie was accepted into the prestigious South by Southwest Film Festival. The film is about the local MMA fight scene in Louisiana, and focuses on a particular gym, the Gladiators Academy, which Poirier trains at and is owned / operated by UFC middleweight Tim Credeur.

“It's about the fight scene in Louisiana, it's about Tim, it's about my rise, it's about Tim's gym. It shows people the hard work it takes to do this. This isn't a hobby. This is a tough lifestyle to make it in. It educates people on mixed martial arts and shows who we are. We're normal people with families and we're not just crazy guys drinking beers and slugging fights on the weekends. We're guys who take a spiritual approach on this and it's very tedious and takes a lot more training than people would think.”

The key relationship in the movie is that of coach and friend, Credeur, and the gym’s star pupil, Poirier. Imagine Credeur as Obi Wan Kenobi and Poirier as Luke Skywalker, only Cajun. As Poirier trained for his June 11th fight versus Young, Credeur was training for his June 4th fight with Ed Herman. With the added incentive of back-to-back fights, the now famed rough, blue collar fighters of Gladiators Academy were working overtime at a fevered pitch in this unique circumstance.

“It's a great opportunity to have my coach training for a fight as I'm training for a fight. It's almost like we're going into battle together. He's a great coach. He knows so much. He's been in the game for a long time. He's traveled a lot. He's trained with and fought great mixed martial artists in his career. He's a great friend. He's the reason why I can stay in Lafayette, Louisiana and not have to move somewhere else. He built a camp where we have great guys, great wrestlers, great kickboxers, great boxers. I have all that I need. He definitely helped me get to where I am in fighting.”

Now, Poirier sets his sights on a probable standup shootout with the 8-3 “Shotgun”.

“To fight a guy who is going to walk forward and throw punches and want to have a fight the way I want to have a fight is great,” says Poirier, whose excitement is palpable for the looming exchange of fists and feet with a striker from across the pond. “I’m fighting a guy from across the world. I'm from Louisiana and I'm not just fighting guys from Texas and Mississippi. From now on, I'm going to be beating up the best guys from all over the world with different disciplines from different training academies and different schools.”

On June 11th in Vancouver, Canada at UFC 131, he wants to solidify his place in the UFC’s featherweight division with a highlight reel victory over the debuting Young. “I don't go in there and try to point punch the rounds or outwrestle you for points to win rounds - I go in there to fight,” asserts Poirier who has finishes, standing and on the ground, in all but one of his nine wins. “I'm walking forward from bell to bell trying to finish you. In this next fight, don’t blink. I don't expect this is going to go to a decision; this fight is going to get finished.”

And with a win over Young this weekend, “The Diamond’s” future in the UFC is a bright one.