"This is one of those fights where I absolutely have to go out and win this fight or it’s pretty much over for me." - Scott Smith 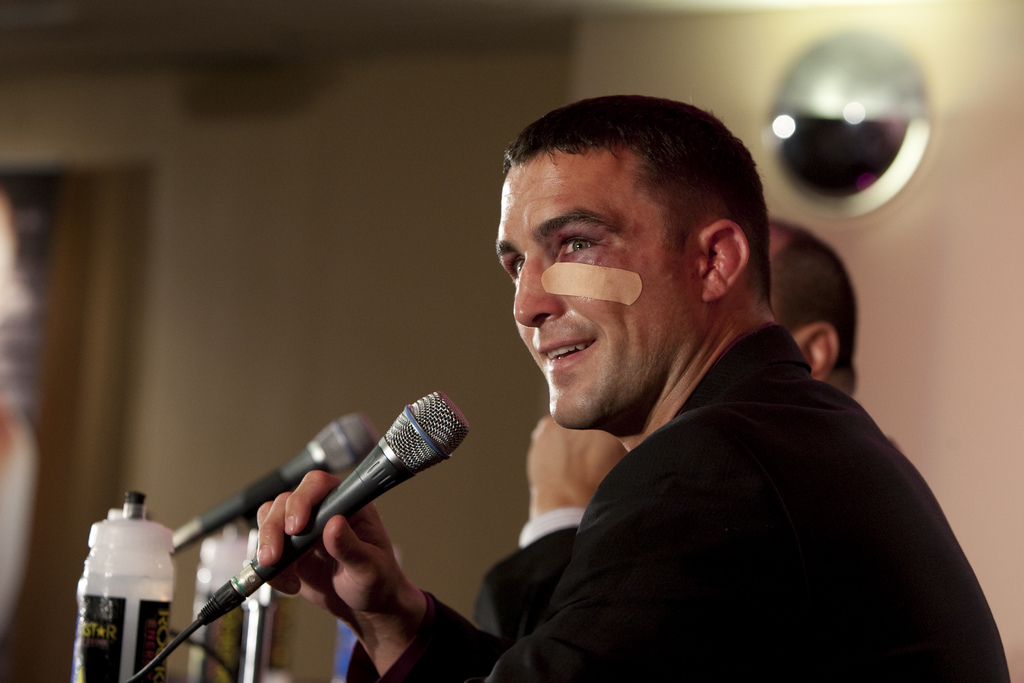 With 28 fights under his belt, many of which were ended by some of the most spectacular knockouts seen in this era, Scott Smith probably has a better idea than 99% of his peers about what his opponent this Saturday, Lumumba Sayers, was feeling after his 28 second KO of Antwain Britt last November.

For a guy who made his way up the middleweight ranks with submission win after submission win, Sayers’ first entry into the knockout column had to be a heady experience to say the least. Sure, Sayers came up on the Toughman circuit where he scored his share of punch-induced finishes, but this was in MMA in one of the sport’s biggest shows. Finally, he got to show the world what everyone in the gym had seen for years.

“When I first started doing MMA, I was strictly wrestling and strictly jiu-jitsu, and my first seven wins were TKOs, but they were taking the fighter down and ground and pounding,” Smith recalls. “I don’t even know if I landed a punch standing up in my first seven fights. But sparring for those fights, I was sparring with a lot of these amateur / newly pro boxers that were pretty much putting it on me because they had the technique, but I would catch them now and then, and they would be like ‘man, if you stuck with the boxing, you would have something here.’ That’s when I kinda knew, but I didn’t have the confidence to go out there and put it together in my fights. And then I got with Ganyao (Fairtex) and the right trainers early on in the WEC days, and I was training with Dave Marinoble and these high-end kickboxers and Muay Thai fighters, and it gave me the confidence with the right kind of sparring to go out and use it in a fight.”

Soon, Smith started focusing on his striking and the results were spectacular. Of particular note were a finish of Justin Levens in defense of his WEC light heavyweight title in January of 2006, and one of the greatest knockouts in UFC history ten months later, as he was almost KOed by Pete Sell before a Hail Mary haymaker knocked Sell out.

By 2008, “Hands of Steel” was plying his trade in Strikeforce, where he counted Cung Le, Terry Martin, and Benji Radach among his victims. But a loss in the 2010 rematch with Le began a three fight skid that included an unsuccessful two fight run at welterweight that saw him knocked out by Paul Daley and decisioned by Tarec Saffiedine.

“The Daley fight, I felt good, but I didn’t get an opportunity to see how it felt in the actual fight, so I wanted to try it again,” said Smith of his time at 170 pounds. “I felt terrible in the last fight. I was gassed in the second round and I kinda got energy in the third a little bit, but a week out from my previous fight, let’s say the Friday before weigh-ins, I didn’t want to train, I was tired, I just wanted to go hit the treadmill and sit in the steam room to cut a little weight.”

This weekend against Sayers, Smith returns to 185 pounds, and he already feels the difference.

“Right now, I’m a ball of energy,” he said. “I feel like I’ve had ten cups of coffee and I’m ready to go train ten times. So when I’ve got the energy level there, I’m able to go train hard.”

And when it comes down to it, Smith has earned enough respect from the fight community for his always exciting performances that win or lose, they will tune in, hence his spot on Saturday’s main Showtime-televised card.

“I’m one of those fans too that likes exciting fighters,” he said. “I like guys that go out there and put on a show, win or lose, and it is nice to see the fan support. Even right after my last fight, I was bummed and down in the dirt, and I had fans coming up to me like ‘man, I don’t care if you lost; you’re one of my favorite fighters.’ And that’s really cool to see. MMA fans are the best out there.”

But the 32-year old from Elk Grove, California is under no illusions about the gravity of his situation entering this bout. With three consecutive losses, and defeats in four of his last five, winning wouldn’t just be nice, it might be necessary if he plans on making a run at Strikeforce 185-pound champ Luke Rockhold.

“Obviously I only look at one fight at a time, but this is one of those fights where I absolutely have to go out and win this fight or it’s pretty much over for me,” he said. “Then after this win, I can sit down and put together a three fight game plan and figure out a way to get back to the top.”

More than accolades though, Smith wants to bounce back and get back to his winning ways for reasons that are strictly personal. He’s a fighter, he’s a competitor, and he’s got his pride.

“It starts getting at you as a fighter,” said Smith of the losing streak. “You start having a losing record the last two, three years, and that’s not something I want. I want to show that I’m not just a guy that can go out there and brawl. I can compete with the top fighters.”

He admits now that he did lose his way technically for a while, and it has everything to do with the knowledge that as bad as things might be going, he has the equalizer with one swing of the fist.

“It definitely gives you that confidence factor,” he admits. “If the fight’s not going the way you planned, you’ve always got that “it” factor to end the fight.”

As the competition got tougher, the openings for his “Hands of Steel” were few and far between, and he wasn’t using the proper technique or gameplan to set up those openings. Against Sayers, he expects to dust off some old tricks and even implement some new ones.

“He’s gonna stand there and trade with me,” said Smith of his opponent. “Not that I’ve seen too much of him, but I’m not threatened by his wrestling at all, and he’s one of those guys that comes out swinging wide. But it’s one of those fights that can be dangerous for me. I can’t go out there and just be a counterpuncher; I gotta go out there with a gameplan, and that’s what I haven’t really done in my last couple fights. I have to go out there and set the pace and determine what’s gonna happen so I don’t get caught by one of his wild punches.”

Scott Smith knows all about wild punches. He’s delivered them and gotten finished with them. Lumumba Sayers has yet to taste that bitter pill of a knockout defeat as a professional, but Smith is more than willing to help a fellow fighter out with a little tough love on Saturday night.