Rumble not Rattled by Opponent Switch 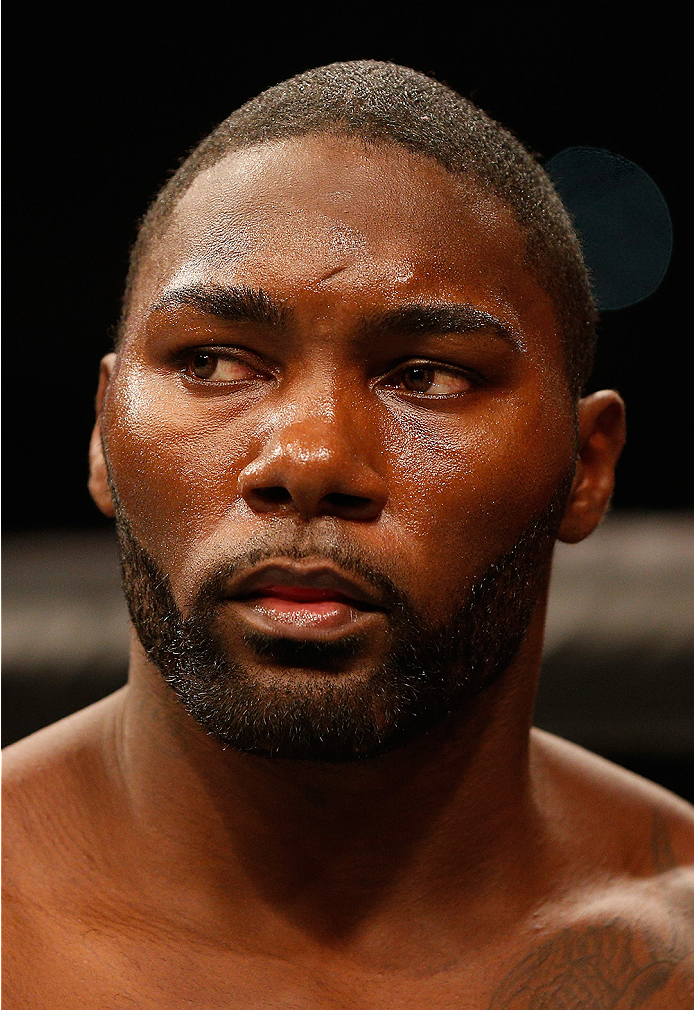 Outside of Jon Jones, no one was more interested and invested in finding out the fate of the now former UFC light heavyweight champion after his recent arrest in Albuquerque than the man who was supposed to fight him on May 23 in Las Vegas, Anthony Johnson.

“It was a little bit nerve-wracking,” Johnson said of the time between Sunday and Tuesday night, as he waited first for the legal process to begin after Jones was charged with leaving the scene of an accident involving personal injury, and then for the UFC to decide whether he would be allowed to fight in the main event of UFC 187. “I didn’t know what the outcome was really gonna be. I knew that I was still gonna fight, but I just didn’t know who.”

On Tuesday night, the UFC announced that Jones was stripped of his title and placed on an indefinite suspension. Johnson would now fight for the vacant title against former number one contender Daniel Cormier. For “Rumble,” it was back to business in the Blackzilians gym in Florida.

“Honestly, I just wanted to know who I was fighting, and that’s all,” he said. “I didn’t care who, I wanted to know if it was Jon or DC so I could go ahead and visualize the fight because nobody wants to wait until the last minute to find out who they’re fighting.”

For Johnson, the top-ranked 205-pounder in the world, after a quick runthrough of MMA math, he knew that if Jones wasn’t going to fight, he assumed it would be Cormier, a two-time Olympian who was preparing for a June 6 bout against Ryan Bader.

“DC had lost to Jon, and Gus (Alexander Gustafsson) lost to me,” Johnson said. “Glover (Teixeira) had just lost to Phil Davis and Phil Davis wasn’t around and Rashad (Evans) is hurt, so what’s going on? (Laughs) Everything was just up in the air.”

Tuesday cleared everything up though, and now the 31-year-old Johnson has a name, a face, and a style to prepare for, one a lot different than he would have been battling in the lanky Jones.

“I don’t need guys that are 6-3 and above anymore, that’s for sure,” he laughs when asked about camp adjustments for the 5-11 Cormier. “But those guys that I was sparring with are definitely tough, so they’re still part of my camp and helping me out a lot. So I didn’t have to switch up things, but I had to sharpen up some extra tools.”

In Cormier, Johnson will be facing a top-notch wrestler who is hungry for his second crack at the belt in his first fight since losing via decision to Jones back in January. And the high praise for “DC” continues with his future opponent.

“He (Cormier) is a superior athlete and one of the best wrestlers of all-time, in my opinion,” Johnson said. “I respect him. I remember watching him in college wrestling, then in MMA, and he’s been successful, so my opinion of him is nothing bad. He’s an incredible person overall and it’s an honor to be able to fight him.”

But in Johnson’s eyes, is this an easier fight than Jones, a more difficult one, or just a different one?

“It’s definitely not an easier fight,” he said. “In my opinion it’s gonna be a tougher fight because this is Daniel’s second chance at a title and he’s gonna bring it, so I’m looking forward to it.”

He should be, especially after a long road back following his release from the organization in 2012 after consistent battles with the scales. Since then, the Georgia native – now a light heavyweight and not someone attempting to fight at welterweight and middleweight - has won nine straight, including victories over Davis, Rogerio Nogueira and Gustafsson in his return to the UFC. He is the rightful number one contender and just one win away from glory.

“All I know is that I visualize myself screaming with happiness at the end of the night,” he said when asked what May 23 looks like to him. “That’s it, because hopefully I win the title. But I came to the conclusion that win, lose or draw, I’m very proud of myself. A lot of people would have given up when they got kicked out of the UFC, but I didn’t, and I faced so many demons and had so many battles and I’m still here. I came back and I came back stronger. So at the end of the night on May 23rd, regardless of what the result may be, I’m gonna be happy.”