"I want this victory more than ever."- Rousimar Palhares 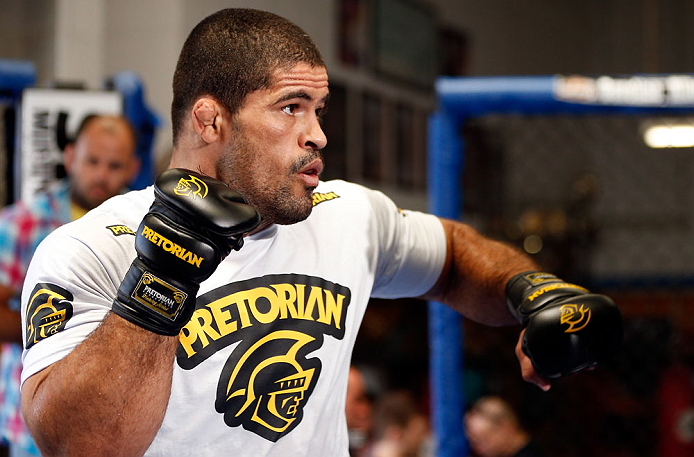 Since his first UFC fight, Rousimar Palhares showed that he had the type of high-level ground game that, when matched with strength and work ethic, makes competitors true champions. Needless to say, fans and insiders eagerly discussed that possibility, dissecting his fights every step of the way.

And after three wins over David Branch, Dan Miller, and Mike Massenzio, it was expected that if he could earn a fourth consecutive victory against a top contender in Alan Belcher at UFC on FOX 3 in May, his title aspirations would shine even brighter. But it didn’t happen, as the Brazilian jiu-jitsu black belt was dispatched via TKO for the second time in his career.

"I had a bad night," Palhares says. "I tried foot and leg locks and I didn't sink them. I spent my strength as Belcher was inside my guard, I hesitated in taking control and I ate an elbow which destabilized me. Fights are like that. If you delay an action, the defeat approaches."

Palhares has been down this road before, with losses to Dan Henderson and Nate Marquardt resulting after lengthy winning streaks. So the question has to be asked – does the powerhouse from Brazil, in fact, feel the pressure of entering the realm of the top contenders?

"I don't feel the pressure; we learn how to deal with that in Brazilian Top Team," he said. "I do what I love. My dream is to be the champion, and I work every day for this. I watch and re-watch training sessions and fights, looking for what's wrong and sharpening my qualities. My time will come and I'll be ready to conquer the dream of the belt."

Luckily, beyond the work in the gym and the film room, BTT founding member and former UFC middleweight champion Murillo Bustamante is the correct adviser to help his pupil get over any mental hurdles in a fight. Have you any doubt? Just look back at two matches of Bustamante's career, the 40 minute draw with the much larger Tom Erickson, and the championship bout against Matt Lindland, and you see that Busta is the perfect man to perfect Rousimar's mindset.

"A few times things happened to me that I don't tell anyone because I believe everything will end up well," Palhares said. "So I've changed it, I listen to Busta, and I also speak more about how I'm feeling in training and principally in the pre-fight moments. Bustamante helps me a lot because he's a former champion, he did a lot of fighting, and he knows the manner to act in all situations. I learn every single day with him."

That’s a good thing because his next fight in Australia is the real deal. Facing hometown favorite Hector "Lightning" Lombard, “Toquinho” will face a foe who suffered something similar as he did in his last fight. Lombard had an impressive winning streak prior to joining the UFC, and when he stepped into the Octagon, he suffered a disappointing decision loss to Tim Boetsch. Whether this was an issue having to do with Lombard’s mental game or not, Palhares doesn't care; he just wants to finish 2012 with a 2-1 record.

"I'm not concerned with his psychological side," he says. "I'm focused on my hard work for this fight. I want to show the unseen potential I have. I pray to God and I believe I'll show it. And everybody will say, 'that is the real Rousimar Palhares.'"

The previous fights of the two aside, this should be a bout to remember. Palhares is a well-known submission machine, and Lombard, a former Olympic judoka, unloads heavy strikes. But tonight, Palhares expects to leave the Octagon with his hand raised.

"I'm not satisfied with myself,” he said. “Because I didn't win in May, I demand a lot from myself when I know I didn't do enough. I want this victory more than ever."