"I want to be a world champion and I don’t think anyone does the things I do to get there. If I could move mountains to become a world champion, I’ll do it. I want it so bad.” - Ross Pearson 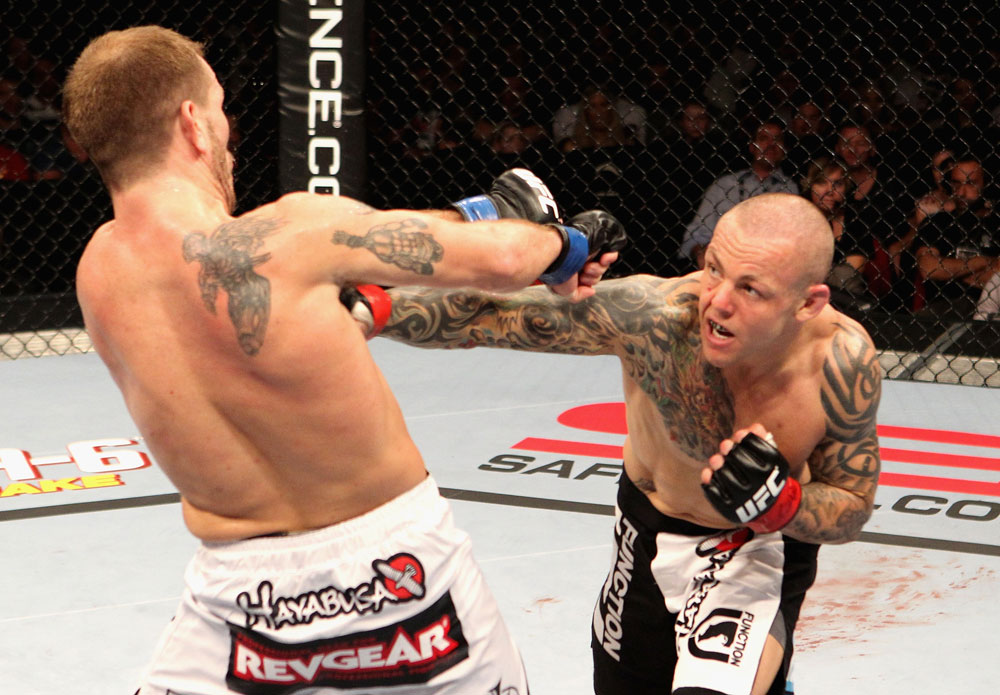 “It’s nerve racking,” said Ross Pearson, and you could hear the anxiety in his voice, almost as if he was reliving everything all over again. In his first fight after winning season nine of The Ultimate Fighter, he was going to make his proper debut as a UFC fighter in his home country of England, and he felt every emotion a human being could muster.

“There were over 16,000 screaming English fans there, and I could feel it,” he said. “I was nervous, I’m not gonna lie, and it’s all those fears of impressing and doing everything perfect and right because you know your friends and family are there. You want to win, obviously, but you have all those fans, which adds to that pressure.”

Based on that description of UFC 105 at the M.E.N. Arena in November of 2009, you would probably guess that things didn’t turn out too well for the Sunderland native. But instead, Pearson made an immediate statement to the lightweight division with a dominant second round TKO of rugged veteran Aaron Riley. So much for those butterflies in the stomach.

But what Pearson found out that night in Manchester was that while being the hometown hero does have some perks, being the guy in the black hat in someone else’s backyard ain’t so bad either. This Saturday night, Pearson, fighting Brazil’s Edson Barboza in Brazil, is likely going to be that black hat wearing challenger. And though it may be odd at first for the popular Brit to hear some boos, he doesn’t have any problem with it.

“In the UFC it’s gonna be weird, because I’ve built up quite a fanbase in the UFC coming through The Ultimate Fighter series, and fortunately, people seemed to like us from the show, so I’ve built up quite a good fanbase and I’ve never actually heard bad things or boos from a crowd in the UFC,” he said. “But back in the day, when I was fighting in the smaller shows, I fought on other guys’ home shows and I’ve been the bad guy, so I’ve heard, on a smaller scale, boos and things like that. So I’m just gonna block it out. I’m preparing for it, and I expect Edson to be the crowd favorite because it’s his hometown. I was like that in Manchester, so I know how it feels for him, and the pressure he has. But when the cage door closes, it’s just me and him in there.”

And unlike his fight with Riley, Barboza is expected by many fans and pundits to be the favorite entering this highly-anticipated main card bout. Again, it doesn’t jar Pearson in the slightest. In fact, being considered the underdog has motivated him even more.

“When I fought Aaron Riley, I wasn’t going in there as the favorite to win the fight,” he said. “He was an experienced guy and a lot of people doubted us back then and I came out and put on a show and that’s exactly what I intend to do for this fight. Although I’ve been in the UFC longer and fought tougher guys and more well-rounded guys, I’m probably gonna go in there and be the underdog. A lot of people and critics are doubting me, and I’m just gonna go in there and rise to the occasion and prove all my doubters wrong.”

Muay Thai specialist Barboza has earned the praise he’s gotten thus far, winning all eight of his bouts, including two in the UFC. But while the hype machine has kicked into high gear for the Brazilian, Pearson’s solid run in the Octagon has been overlooked by some. No one put it on Riley like Pearson did in 2009, he beat Dennis Siver for the Germany resident’s only loss in his last nine fights, and he’s coming off a UFC 127 win over Spencer Fisher. The lone hiccup is a submission defeat to Cole Miller last September in a bout where Pearson tore cartilage and chipped a bone in his knee early in the fight. But Pearson isn’t one to moan or complain or scream to the media that he’s not getting his just due. The way he sees it, there’s always room for improvement, and when his time comes, the world will know it.

So for this training camp, he quietly made the trip across the pond and settled into the Alliance Gym in San Diego, California.

“From the very first session that I trained, I fit in with every one of the guys in the gym, and with the standard of the training partners that we have here, it was just an opportunity I couldn’t turn down. The standard is right up there at the top and it’s bringing my game on so much.”

Home to the likes of Dominick Cruz, Phil Davis, and Brandon Vera, Alliance has become a second home for the affable Pearson, and for the record, it was a move fully endorsed by those closest to him.

“Everyone back home in England – my family, friends, even my teammates – said that if I want to evolve and become a world champion in the sport, I have to go out here and train with the best,” he said. “There was nothing but positive vibes coming from people back home, telling me I was doing the right thing coming out here. I had sorta become a big fish in a little pond training in England, where out here, I’m just a little fish in a very big pond.”

Sounds like everyone just wanted to get rid of him…

“Everyone probably but me mum,” he laughs.

But on a serious note, Pearson’s continuous search for knowledge and top level training opportunities bodes well for his future, especially since his goal isn’t fame or fortune, but only to place a world championship belt around his waist.

“I just want to go in there and prove to everyone that I’m a mixed martial artist and I’m well-rounded,” he said. “I want to take this to the next level. I’ve said it before, I’ll say it again, and I’ll always say it – I want to be a world champion and I don’t think anyone does the things I do to get there. If I could move mountains to become a world champion, I’ll do it. I want it so bad.”

Saturday night, he’ll get to see how bad Edson Barboza wants it. If it’s even an ounce less than Pearson does, “The Real Deal” may walk away with this one. If they both want it equally as much, those “Fight of the Night” predictions will likely come true. Either way, Pearson doesn’t look at Barboza as an unbeatable phenom; he’s just another man, and any man can be beaten.

“There’s a way to beat everyone,” he said. “No one’s unbeatable, no one’s God; there’s always a way to beat someone and to find out how to win. It’s like a game of chess, finding a crack in the code and sticking to it, and that’s what I’m out here at Alliance for. There are some of the best coaches in the world here, like Eric Del Fierro and Adrian Melendez, and we’ve got Phil Davis wrestling, Brandon Vera Muay Thai, and Dominick Cruz, who’s a world champion, so he knows all about how to win. And that’s why I’m out here, learning how to win. I’m not out here for a holiday and to have a nice, easy training camp; I’m learning how to win, I’m learning the gameplan, sticking to it, and knowing how to beat this guy. This fight is on the main card, it’s a great opportunity, and there’s gonna be millions of people watching this show, so I think a big win on this card is gonna put my career on to that next level and show people what I can really do.”