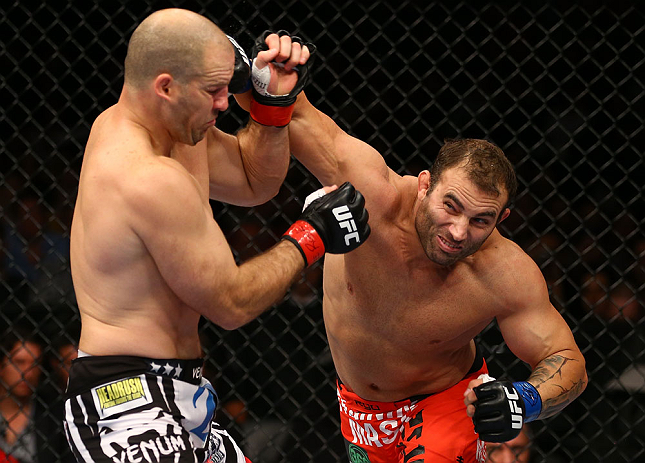 You don’t see too many fighters like Ralph Hollett out there anymore. A former Canadian boxing champion who held wins over the likes of Bennie Briscoe, Elisha Obed, and David Love over the course of a six year pro career from 1977 to 1983, Hollett was one of those guys who epitomized toughness. He wasn’t flashy, he didn’t do any one thing spectacularly, but he always showed up to fight.

It’s a description that you could pass on to another tough Canadian fighter, UFC light heavyweight Roger Hollett, the son of Ralph, and if you told him that would be his legacy, he would probably be happy with any comparison to his dad, who passed away in 2012 after a long battle with cancer.

A native of Halifax, Nova Scotia, the younger Hollett laughs when asked whether there was any question when he was younger that one day he would put on a pair of gloves and fight.

“I was pretty much dragged around every gym in the city,” he said. “We didn’t really get babysitters. He (his father) always tried to persuade me in that way, and you could say I was pretty much born in the gym.”

You could say that was a lot of pressure to have on your shoulders, not only to fight, but to follow in the footsteps of a revered figure in the city like his dad was. Hollett doesn’t look at it quite that way.

“I didn’t feel pressure,” he said. “I found it was a goal to try to live up to what he did and try to be successful like he was, but I never took it as pressure.”

And from the time he turned pro in 2006, he has performed with no such pressure-filled restraints, winning 13 of 17 bouts in a form of fighting that’s different from the one his father practiced, but one that dad also admired, having started in karate.

“He loved it,” said Hollett. “He even said that if this was around back in his day, this would have been his sport. He was a real rugged guy and he liked to get in there and brawl, so he loved it.”

With a solid reputation built north of the border, Hollett received interest from the UFC in 2012, only to see a contract issue with a previous promoter scrap a fight with Matt Hamill at UFC 152 last September. But when replacement Vladimir Matyushenko was injured and Hollett got his contract issue cleared up, it opened the door for the Hamill fight to happen. The only problem was that Hollett was stepping back in on a little over a week’s notice.

“It’s hard to prepare for a guy like Hamill when you only have eight days’ notice,” said Hollett, who lost an uninspiring three round decision to the UFC vet. “I was in the gym, basically just helping out and not really doing too much, but it is what it is.”

A second UFC fight, this one in Brazil against Wagner Prado in January, hit the skids when Hollett was injured, but he’ll get his trip to South America when he meets Fabio Maldonado on the UFC on FX 8 card this Saturday.

“One of the perks being with this company is that they travel all over the world, so sometimes you get to see some really nice places, and luckily I’m going to Brazil,” said Hollett, fighting outside of his native Canada for the first time. That could be an issue for some fighters, but we already know how the 34-year-old feels about outside issues, so he’s expecting the Octagon to be the same dimensions that it is at home. As for his opponent, Maldonado is ideal, being that he likes to keep it standing.

“He is a good fight for me because we both like to stand and bang,” agrees Hollett, a member of the Jackson’s MMA fight team. “I see some weaknesses in his game and I’m sure he thinks he sees them in mine, so we’re both gonna get out there and get after it.”

It’s the kind of fight you expect Ralph Hollett would have loved to see, or even more likely, would have loved to compete in. But now it’s Roger’s turn to carry on the family business, and after some ups and downs, he plans on showing that he’s here in the UFC to stay.

“It was always the goal,” he said of being in the Octagon. “I just never knew when it was gonna happen. I had series of events that set me back, but I’m here now, I’m happy, training’s been great, and I’m ready to rock and roll.”