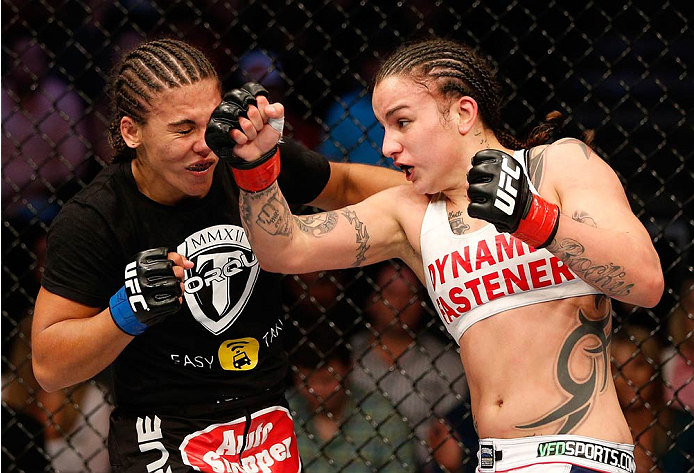 If anyone in the fight game earned a vacation in 2014, it’s probably Raquel Pennington. No, she didn’t put in the type of year Neil Magny or Donald Cerrone did in terms of volume, but since the start of her pro career in 2012, she’s fought a Who’s Who of the sport during a time when most prospects are trying to get their feet wet.

So after a split decision loss to Jessica Andrade in March, she took the gloves off and lived life for a while.

“I went on a break,” Pennington said. “When it comes to our sport we have to take our mental breaks, and I don’t think a lot of people realize that. When I went pro two years ago, I did what a fighter would do over a five, six-year period and I just really wore myself out. I found myself losing a lot of passion, so I needed to find a part of me again and have fun and completely get away from things for a little bit, which was nice because it gave me that passion to enjoy what I’m doing again.”

A summer trip to Brazil did the trick for the 26-year-old Colorado Springs native, with the three weeks away from home giving her a new perspective on fighting and life.

“It really makes you grateful for what we have here and what we’re blessed with,” she said. “But even the people who don’t have anything, they’re the happiest people you’ll ever meet.”

Of course, being a fighter, Pennington couldn’t stay completely away from the sport, as she visited Lyoto Machida’s gym, but she insists that it was just to watch and not train.

“I just wanted to see the gym and get a different idea of things,” she laughs.

When she got home, refreshed and healed up from some nagging injuries, she was ready to start again.

“I watched a bunch of UFC, I watched the girls that were getting fights, and I had to find that motivation again,” she said, hoping to get a fight in December or January. “I was getting in shape, having that fun of being in the gym again, and then I got the call from (UFC matchmaker) Sean Shelby and I said ‘sweet, let’s do it.’”

What Shelby presented was an offer she couldn’t refuse, the opportunity to fight on the UFC 181 main card on December 6 in Las Vegas and welcome highly-touted newcomer Holly Holm to the Octagon. A win for Pennington wouldn’t just even up her pro MMA record, but she would be doing so in the most high-profile fight of her career.

Then Holm got injured, forcing her removal from the bout.

“There was a little disappointment and it was a little frustrating because I was training for this girl who’s a boxer and a stand-up fighter who has this huge hype train behind her,” Pennington, a fighter who never shies away from a stand-up scrap, said. “I felt like a part of me lost focus for a couple days. Me and my coach had a long talk – he said ‘go home, take a couple days, come back refreshed and we’re going to continue to fight and train for this.’”

When Pennington returned, she had a new opponent and another unbeaten newcomer in Ashlee Evans-Smith. The talented Evans-Smith doesn’t have the name recognition of Holm yet, so the bout got pushed to the prelim portion of the event, but getting the victory is just as important for Pennington.

“A fight’s a fight and I want to fight everybody,” she said. “Every girl brings a new challenge to the table and I don’t want to take away from anybody, especially with what we do, but it was a bit frustrating to go from the main card to a prelim fight, and everything changed because of the two different opponents. But hey, I’m still fighting on the big show and I still get to put all my hard work to use and show it off that night.”

She even jokes that with her bout being on the prelim card, she’ll be able to get her fight done and still watch the rest of the stacked UFC 181 show, but in all seriousness, she’s excited to get back in there, no matter who the opponent is.

“Regardless of her being new or whatever, I just like the challenge,” she said. “There’s always going to be a challenge from a different athlete who’s put in front of you.”

But what of the challenges Evans-Smith faces on fight night? Late notice, first-time Octagon jitters, fighting on one of the biggest events of the year, and those are just the outside factors. What about facing Pennington, whose resume holds the names of Cat Zingano, Andrade, Leslie Smith, Roxanne Modafferi, Sarah Moras and Raquel Pa’aluhi? That’s experience you can’t buy, and “Rocky” believes the way it shows up on fight night is not through technique, but in the mental game.

“A lot of people think so much of this sport is physical, but I would say it’s 30 percent physical and 70 percent mental,” she said. “It took me a while to get there, but I had this break to sit back and look at things and realize that I have fought some of the toughest chicks out there, I’ve experienced a lot, and I haven’t been given enough credit for it. But it (having that experience) is a comfort. I’ve really learned who I am and the fighter that I am and the talent that I hold.”

She’s also found an extra gear in her training as well.

“I’ve been doing a lot more training with Olympians and world-class athletes, and that’s helped out mentally,” she said. “I don’t go into the gym and everybody says ‘oh, there’s Raquel Pennington,’ and they’re trying to be like you. Now I go into a gym where every athlete has the same goals as me, and from the minute we start to the minute we finish, it’s just a lot of hard work and they respect you on a completely different level. It’s helped a lot mentally.”

Sounds like Raquel Pennington got her mojo back. So does this mean six fights in 2015 for the bantamweight standout?

“No,” she laughs. “From now on I want to do it smart and I just want to enjoy it, instead of being stubborn and trying to get in so many fights.”