"Since the opportunity’s here, and I’m really very lucky to be given the
chances I’ve been given, I’m gonna keep going with it. I love it." - Peggy Morgan 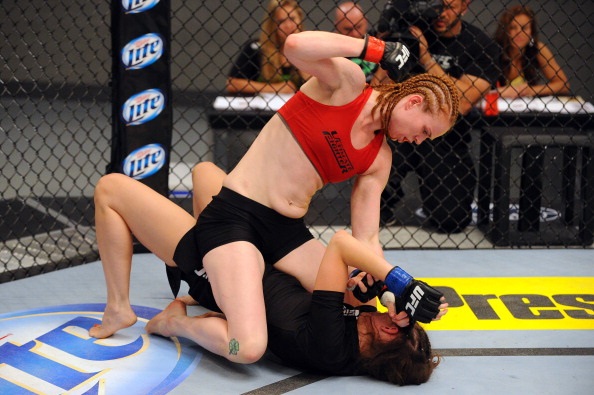 Warning to the students at Southern New Hampshire University: despite getting ready for the biggest fight of her mixed martial arts career this Saturday, Professor Peggy Morgan has not stopped grading your papers.

“It’s really hard right now, honestly. It’s definitely a juggling routine and I’m not getting as much sleep as I’d like to, especially since I have a four-year-old son too. I have a lot of stuff going on.”

Yet the funny thing is, you get the impression that this is the only life she knows, and one that she’s embraced ever since she began training in MMA in 2011. The goal? To see just how far she can push this.

“My attitude all along has been I’m just going to take it as far as I can take it,” she said. “I haven’t even been doing MMA for two years now. My first fight was the beginning of 2012 and I kind of went into that with ‘let’s see what happens and see how I do.’ And I did well and kept going. At this point I’m going to take it as far as I can take it. It’s something I really enjoy and something I’d like to do for as long as I possibly can to the best of my ability. No matter what, MMA is not a long-term career. It’s not something you’re going to do until you’re 50, and you can’t plan your entire life around ‘I’m going to be a fighter for the rest of my life.’ But since the opportunity’s here, and I’m really very lucky to be given the chances I’ve been given, I’m gonna keep going with it. I love it.”

2-0 as a pro and 1-1 on TUF 18, where she stopped Bethany Marshall and was submitted by Sarah Moras, the New England product has had a rapid rise to the sport’s biggest stage, and despite her day job as an adjunct professor of composition and literature at SNHU, fighting is her first love. So what happens if she beats Duke, gets a few more wins, takes the UFC women’s bantamweight title, and becomes a fighter that needs to make this a full-time gig?

“I would love that and I would be more than happy with that life,” she said. “Obviously that would be the ultimate goal, but at the same time, it’s not the only thing in my life. I’ve always tried to stay well-rounded and have other things going on, just because it’s not something you can bank on forever.”

That’s the academic and practical side of the 33-year-old Morgan coming in, and it’s that side that made her family wonder why she would want to put on gloves and fight another woman.

“They’re worried about me being injured,” she said of her family’s reaction to her other job. “They don’t really know what I’m doing. They just know that I get punched, and they don’t like it.”

Morgan’s friends take another view of this part of her life, though it must be pointed out that her current circle may be a bit biased.

“Most of my friends are very supportive,” she said. “But at this point in my life, most of my friends are people I train with anyway because I don’t have a lot of time outside of training. I’m working or taking care of my son. It’s not like I’m even going out on the weekends anymore. So I’m kind of lucky in a way that I’m very isolated and I’m only around other fighters. There are drawbacks to that too, but it means that I have a really strong support system.”

Two members of that support system know a little something about the whole Ultimate Fighter and UFC experience, and TUF alumni Jimmy Quinlan and Chuck O’Neil didn’t just help prepare her for six weeks in Vegas removed from the outside world, but for the inevitable craziness of a UFC fight week.

“Just being able to talk to those guys and draw on their experiences has helped a lot,” said Morgan, who refuses to be distracted by the bright lights and everything else that ultimately has nothing to do with what’s going on this Saturday night.

“I remember that that’s not what I’m fighting. I’m fighting one other human being that’s the same size as me. She can’t fly, she can’t shoot laser beams out of her eyes. That’s what I need to focus on, not all this extraneous stuff that’s going on.”