"I have been fighting top notch submission fighters and nobody submitted me. So I do have enough confidence to face him." - Kid Yamamoto 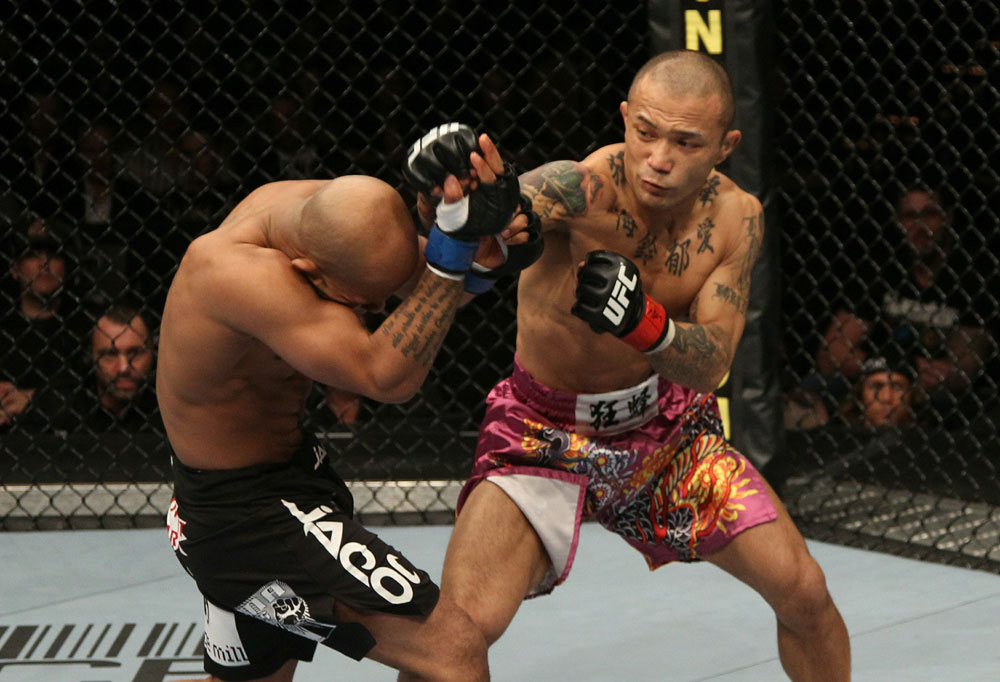 Pressure in the fight game is always relative. When someone is trying to punch you in the face or make you submit, that’s pretty rough in and of itself. So when you add in the ideas of trying to break a string where you were 1-4 in your last five fights, along with fighting in your home country for the first time in nearly two years, are those factors more pressure-laden than avoiding a punch in the face?

For Norifumi “Kid” Yamamoto, fighting has been his life professionally for almost 11 years, so that part of the pressure equation isn’t a big deal. As for his 1-4 record since returning from a year and a half injury-induced layoff in 2009, a stretch that includes an 0-2 slate in the UFC, he simply says he’s been “a little bit frustrated, so I committed myself to train longer and harder to prepare for the fights.”

But what about this Saturday’s UFC 144 bout in Saitama, Japan against Vaughan Lee, the Kanagawa’s native fighting return to home shores? Is there pressure for him to be the “Kid” once again in front of his loyal fanbase?

It’s as blunt as an assessment as you will get from any fighter on any topic, and that’s Yamamoto’s personality when it comes to his day job. He’s to the point with little embellishment, something that translated into his prime performances, where every punch, knee, or kick was designed to get his opponent out of there. From his four second flying knee finish of Kazuyuki Miyata in 2006 to the soccer kicks that ended Rani Yahya’s night in 2007, Yamamoto was rightly considered one of the lighter weight classes’ elite competitors, and his name regularly came up in discussions about fights with stateside standouts Urijah Faber and Miguel Angel Torres.

So when Yamamoto arrived in the UFC’s bantamweight division in 2011, expectations were high, but results underwhelmed, as he lost back-to-back decisions to Demetrious Johnson and Darren Uyenoyama. When asked what has gone wrong in the UFC thus far, Yamamoto replies, “a lack of training due to injury,” and he claims that when it comes to adjusting to the long travel schedule from Japan to the United States and fighting in the Octagon, he had had “no issues at all.”

Which brings us to Saturday night and England’s Vaughan Lee. A scrappy ground ace who isn’t afraid of standing and trading, Lee - like many of his peers - is an admitted fan of Yamamoto, but that’s not going to stop him from trying to hand one of his favorite fighters a crushing defeat. Yamamoto (18-5, 1 NC), whose only stoppage loss came via cuts to Stephen Palling in his fifth pro fight in 2002, isn’t overly concerned with Lee’s submission skills.

“I have been fighting top notch submission fighters and nobody submitted me,” he said. “So I do have enough confidence to face him.”

Aiding in this confidence is that Yamamoto is healthy, and he’s also far removed from any possible distractions at home due to the relocation of his training camp to Mecha MMA in Toronto, Canada.

“My sister suggested and arranged for me to train at Mecha MMA,” said Yamamoto. “(They bring) New technique and good conditioning.”

As for getting away from Japan and all the pre-fight hype for this camp, he says, “I came here for training, which is the same anywhere.”

That’s typical “Kid” Yamamoto. No nonsense to the core. But his hard edge softens a bit when asked about what this fight means, not just to him, but to his loyal fans at home and abroad who would like nothing more than to see a return to form on Saturday night.

“It is really important to win the fight not only for myself but also for all of those fans,” he said. “I also want all of my fans to get excited about not just winning, but the fight.”

Any last minute instructions to those fans?