Pennington continues to knock down goals, with the world title up next 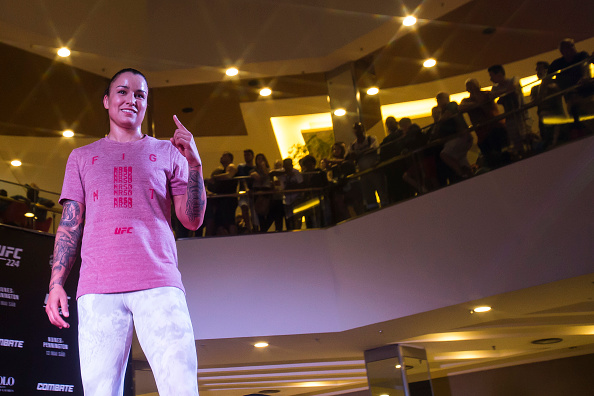 Not many fighters can come off an 18-month layoff and into a title shot. Then again, not many fighters are Raquel Pennington, who challenges Amanda Nunes for the UFC women’s bantamweight title in the main event of UFC 224 on Saturday. And no one knows it better than “Rocky.”

“I definitely earned the title shot,” Pennington said. “I’ve never turned down a fight and I’ll take on whoever it is. I believe everybody in this division has something to offer, it doesn’t matter where you’re ranked, and I feel like I’ve worked my way up from ground zero. I never had anything handed to me and I wholeheartedly believe that this is my time to shine.”

Among the ladies in the 135-pound weight class, few can claim the resume Pennington has when it comes to fighting quality opposition. Before even making it to the UFC, the Colorado native fought Sarah Moras, Cat Zingano and Leslie Smith. Then it was Tonya Evinger, Jessamyn Duke and Jessica Rakoczy on The Ultimate Fighter.

That’s already a killer lineup to learn your craft against, but it wasn’t until a close 2015 loss to Holly Holm in the Octagon that Pennington found her groove and her focus.

“I could have beat her, I should have beat her,” she said of the split decision defeat to the future world champ. “I told myself that I either need to step away from this sport or I need to get my act together, and I decided to get my act together. That was my turning point. I needed to step back and see what kind of athlete I am, realize why I joined this sport, why I’m passionate about it and why I put myself through what I do.”

She hasn’t lost since, winning four straight over Jessica Andrade, Bethe Correia, Elizabeth Phillips and Miesha Tate. After the win over Tate on the historic UFC 205 card in November 2016, Pennington suddenly found herself in the title race.

But that momentum was lost due to shoulder surgery. Then it got worse.

“Shoulder surgery, wrist surgery, mouth surgery, and then I turn around and break my leg,” she said, referring to the ATV accident last October that scrapped a hoped for UFC 219 battle against Nunes in December and threatened to keep her from walking again, let alone fighting.

“You battle everything. I can’t just walk into the gym and do what I want to do. It felt like no matter what I was doing, I was always fighting some sort of obstacle. It can really take a toll on a person.”

Yes, Pennington had spent a career fighting the toughest opposition possible, but the toughest foe was the one in the mirror.

“I’d probably say these last 18 months were some of the hardest months that I’ve ever had to face,” she said. “Overcoming all the injuries, I never thought it would take such a toll on me. It actually broke me mentally and emotionally. One day I had to sit back and realize what I was doing, where I wanted to be, and just embrace the process. I had to enjoy the journey. So it was a mental game. I know I want to be at the top, and I had to find the fun in everything. Even though the injuries were something difficult, I had to find what was positive about that and realize that mentally, it’s changed me.”

Pennington won that fight, and now it’s on to the next one, the one that could put a gold belt around her waist. The fact that she has to take that belt from a friend in Nunes doesn’t matter. It’s time to work and she’s come too far and through too much to stop now.

“The respect is there, the sportsmanship is there, Amanda and I are friends, and (Pennington’s girlfriend and UFC strawweight contender) Tecia (Torres) used to train with them. It comes down to the sport and I’m gonna bring something to the Octagon and she’s gonna bring something. We hang out as friends, we talk, we’re very civil, and come fight time, it’s gonna be a whole different ballgame. It’s business in the Octagon.”
MORE FROM UFC 224: UFC 224 Countdown - Nunes vs Pennington | Embedded Ep. 5 | Open Workout Highlights | Free Fights: Nunes vs Rousey | Pennington vs Evans-Smith

To some, a 9-6 record shouldn’t be attached to a world title challenger. Those folks don’t look past the numbers to see the talent, the struggle, the reason why someone keeps getting up in the morning to train when everything is seemingly going against her. It’s those attributes that don’t show up on a win-loss record that ultimately win fights. That’s what Pennington is expecting.

“Now, there’s a woman on a mission, and that’s a dangerous thing,” she said. “I’m tired of people completely underestimating me and doubting me all the time, and I feel like when it’s fight time, it will speak for itself.”

And if she leaves Rio de Janeiro with that belt?

“I still haven’t found the right words to explain what winning the world title would mean to me,” Pennington said. “It’s something that’s been the ultimate goal of mine, but also just to see how proud I will make myself and my family and my friends and Tecia and all my coaches, and to know all my hard work has paid off. Just being a challenger right now and getting this opportunity, that’s an accomplishment by itself. The next one is to win the world title. That’s my next goal.”