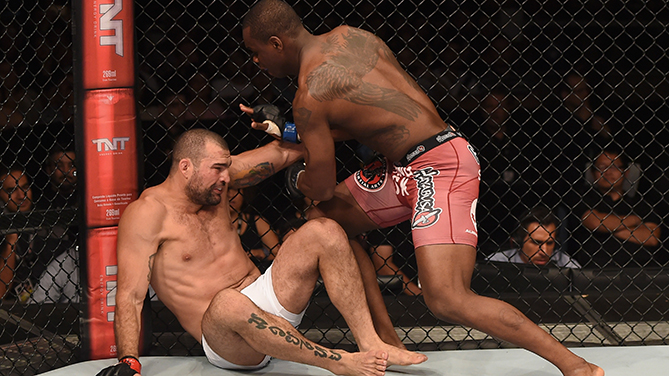 Before a stunned crowd at the Ginásio Municipal Tancredo Neves in Uberlandia, Brazil, Ovince Saint Preux made the most of his last-minute assignment against Mauricio “Shogun” Rua, knocking out the former light heavyweight champ just 34 seconds of their UFC Fight Night main event Saturday.

“This fight meant a lot to me,” Saint Preux said. “Shogun is a legend, I’ve got a lot of respect for him and I’m still gonna be a big Shogun fan, but it’s one of those things: in order to become a legend you’ve got to beat a legend. So that’s what I did tonight.”

Saint Preux moved up from an originally scheduled co-main event bout against Francimar Barroso to replace the injured Jimi Manuwa and score the upset of the 32-year-old Brazilian star, who was recently named coach of The Ultimate Fighter Brazil 4.

The bout started off typically enough, with the two light heavyweight contenders trading kicks, but as Rua moved in to rip off a punch combination, he missed and caught a left hook, falling to the canvas in the process. Saint Preux shot in, and a series of unanswered left hands brought in referee Mario Yamasaki to halt the fight, silencing the fans in attendance and giving the Tennessee product his biggest win to date.

With the win, the number ten ranked Saint Preux ups his record to 17-6; the number nine ranked Rua, who has lost four of his last five, falls to 22-10. 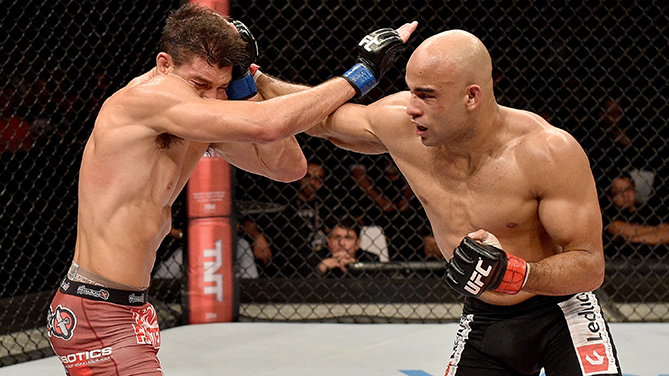 All three scores read 29-28 for Alves, a decision that was met with boos by the Uberlandia crowd.

Alves went on the attack as soon as he was waved into battle, and his non-stop punching attack put Jouban on the deck. More strikes followed before he went for a guillotine choke, but Jouban was able to escape and get back to his feet, battered, but undaunted. The two proceeded to lock up against the fence, Jouban landing some solid close-range strikes. With two minutes left, the two separated, with the American scoring and beginning to get his rhythm as Alves felt the effects of his fast start, a predicament that didn’t get any better when the Brazilian ate a kick to the liver before the end of the round.

The bout went to the mat early in round two, Jouban staying busy from his back as Alves tried to measure his attacks and conserve his energy. Midway through the round, the two rose, and Jouban picked his shots well until an inadvertent eye poke brought a brief halt to the action late.

There was another stop early in the third, this time due to a Jouban low kick, and after the fight resumed, the two had a few heated exchanges as they tried to make a late impression on the judges. Jouban continued to press, looking to be on the verge of a stoppage at times, as the exhausted Alves looked at the clock.

In a clash of welterweights who made their name on the British MMA scene, Brazil’s Claudio Silva outlasted Jamaica’s Leon Edwards, winning a three-round split decision.

Silva went all out for the finish on the ground in the opening stages of the first frame, but after Edwards fought off the assault and got back to his feet, the Brit began controlling the stand-up against his rapidly tiring foe.

Wild swings from Silva opened the second round, with the more technically sound striking of Edwards allowing him to stay in the lead. The strikes of “Rocky” soon opened up a cut under Silva’s left eye, and the Brazilian’s attacks were becoming more desperate. With a minute remaining, Silva was able to get a takedown, and he began emptying his tank in the hopes of a finish, but the horn intervened.

The third round began with a Silva takedown, and the Brazilian smothered his foe until he was able to get the mount position and then the back. Edwards reversed position with under a minute to go and got back to his feet, but there would be no late finish for him, as Silva was able to stay out of trouble and take the decision.

Short notice injury replacement Jorge de Oliveira gave a game effort in his UFC debut, but TUF 19 finalist Dhiego Lima was too much for the Rio de Janeiro product, as he won a shutout three-round decision.

The 6-foot-2 Lima did a fine job of using his striking from a distance for the first two minutes of the bout. The 5-foot-8 de Oliveira did briefly rock him with three minutes left, leading Lima to lock his opponent up against the fence and then take him down. Lima almost locked in an arm triangle, but after de Oliveira escaped, the Goiana native hit the downed “Blade” with an illegal knee just before the end of the round, halting the action briefly.

Lima got the bout back to the mat to start round two and he quickly moved into the mount position. The two traded ground strikes, but the bigger Lima was proving to be too much for his foe, as he pounded away with punches and nearly sunk in a rear naked choke. With a minute remaining, de Oliveira was able to get to his feet and the late replacement made a run at his foe, but it was back to the mat for the remainder of the round.

The pace dipped in the final round, but the results didn’t change, as Lima put another solid round in the bank to wrap up a dominant effort.

The first round was tough to score, with Lima controlling the action from the top position on the mat, but Ansaroff staying busy with submission attempts and strikes from the bottom. An inadvertent upkick to the head by Ansaroff to the downed Lima with seconds left brought a brief halt to the action, but the Brazilian recovered quickly.

There was more of the same in round two, Lima (7-2) winning the position game on the canvas and Ansaroff nearly sinking in an armbar. After a restart of the stalled action by referee Keith Peterson with 1:19 left, Ansaroff (6-4) was finally able to get some strikes off, but not enough to turn the tide of the fight.

The third round was fought mainly on the cage in the first three minutes, Lima again the busier of the two. Ansaroff made a brief surge late, yet Lima stayed out of serious danger and coasted to the win.