Notorious and the Stars of UFC 181 on Aldo-Mendes 2

McGregor, Hendricks, Pettis, Lawler, and Melendez check in with their thoughts on the UFC 179 main event between Jose Aldo and Chad Mendes... 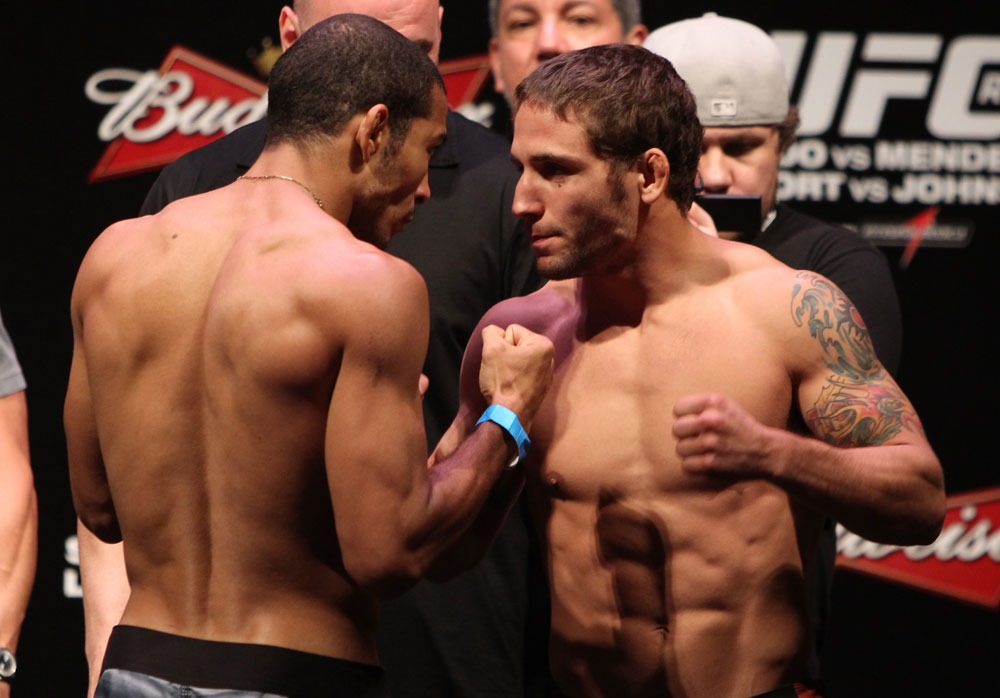 This Saturday, the featherweight rematch the MMA world has been waiting for finally takes place in Rio de Janeiro, as 145-pound champion Jose Aldo defends his crown against number one contender Chad Mendes. The UFC 179 main event has produced more than its share of debate among fans and pundits over the past several weeks, but how do some of the top fighters in the UFC see this fight playing out? We asked the four headliners of the UFC 181 card on December 6th, as well as an interested observer from Dublin for their takes on the bout.

CONOR McGREGOR
Top featherweight contender
“Ultimately, I’m going to whup both of them. It’s going to be me and Jose for the belt – I believe Jose will take the win at UFC 179, and then I’m going to bounce into that cage and cause chaos. And then I’ll get Chad as well because he’s been talking a lot of s**t. I’ll get him somewhere down the line, and ultimately, one by one, I’ll get all these people. I don’t really care who wins, and in my eyes, they both want to lose. They both secretly and subconsciously want to lose because they know they’re facing me after.”

JOHNY HENDRICKS
UFC welterweight champion
“Mendes is very good at doing some things in that fight. One thing he has to do is check those leg kicks because Aldo is very good at that. Also, if he’s going to win, he’s gonna need to back Aldo up a lot more, be in his face, and don’t give him that room to move forward and get off his combinations. It’s hard to go against Aldo, but with the last weight cut we saw with Aldo, he didn’t look so good, and he’s talked about how he might try to go up to 155. So will that be a factor, or will he come out there making 145 better than he ever has? Those things could be a factor, but realistically, it’s going to be hard to beat Aldo. He’s got multiple power kicks, decent takedown defense, and he’s also got very good jiu-jitsu, so if all those things are there, it’s going to be very hard for somebody to take that belt away from him.”

ROBBIE LAWLER
Welterweight title challenger
“I haven’t really watched a lot of Mendes’ fights, but judging by how that camp is, they’re ready to go. They train hard, they’re always in shape, but so is Aldo. Aldo is coming off a couple injuries and getting banged up a little bit, so maybe he’s not where he needs to be due to training too hard or not training smart enough. I don’t really know how this fight is gonna go. They’re two real good fighters - one guy with awesome power in Mendes who is a really good wrestler that can knock you out, and Aldo is a winner who can do it all. It’s going to be a barnburner and we’ll just see what happens.”

UFC.com – Do you know what Mendes is going through, being that he’s going into a rematch with a guy he lost to, just like you are?

ANTHONY PETTIS
UFC lightweight champion
“It’s going to be an interesting fight. Mendes is one of my boys, I’ve trained with him before, he’s a great fighter, and it all depends on what mindset he brings into the Octagon. When somebody knocks you out like that, no matter what, you’re thinking about that opponent. So if he goes out there and fights his fight, I think he can get it done. Jose Aldo is one of the best in the world for a reason, and besides Mendes, I don’t really see anybody else giving Aldo a run for his money at ’45.”

“Yeah, it makes sense. He handles his business, I handle my business, let’s have a SuperFight.”

GILBERT MELENDEZ
Former Strikeforce champion and lightweight title challenger
“We’re on the home turf of Jose Aldo and that’s a big deal. He’s gonna have the power of Brazil behind him and as a fighter, you’re pumped up, and as soon as you hear the crowd cheering for you, it’s a great thing. Mendes is going to be in hostile territory; can he channel that into positive energy? His last fight (with Aldo) he got knocked out in one round. That’s a lot to deal with and come back from. It’s one thing to come back from a loss, but from a first round knockout, that’s tough. Mendes has improved his striking, I think he can gas a little bit, and unless he imposes his will and is just tenacious with the takedowns, I don’t see him beating Aldo. I see Aldo neutralizing him, picking at him with punches, defending the takedown and using his speed to defeat Chad Mendes. If Mendes is tenacious with the takedowns, it could become interesting, but I’m going with Aldo in this one.”