No Doubts for Whittaker before Pivotal Battle

"The whole training camp I’ve been just honing my skills, honing the
edges of my weapons.  I’m going to incorporate my game plan and just
throw it at him." - Robert Whittaker 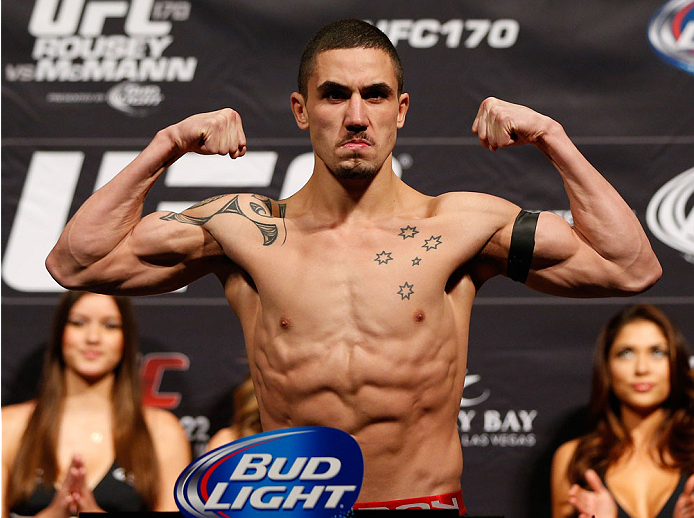 The 23-year-old winner of The Ultimate Fighter: The Smashes had a positive start to his post-TUF UFC career with a TKO win over Colton Smith.  But Whittaker lost his next two, first a controversial decision to Court McGee, then a February 2014 TKO defeat against Stephen “Wonderboy” Thompson.

“Coming off that loss (to Stephen Thompson), it was a rude awakening,” said Whittaker. “It showed me a lot of faults in not only my own game plan but just in preparation in general.  It made me have a good hard look at how I was preparing for my fights, where the fight actually started and how I wanted them to finish.  I took a lot from it and I believe I’m all the better for it.”

The New Zealand-born Australian fighter says he has changed his outlook on fighting, and has worked on returning to the mindset that got him into the UFC.

“Early in my career, mentality was always a big thing for me and I kind of strayed away from mentality a bit in exchange for hard training.  I’m kind of trying to get back to my roots a little bit, just getting comfortable enjoying the sport again.”

Whittaker prepared for several of his UFC fights at Canada’s famed Tristar gym, home to stars like former UFC welterweight champion Georges St-Pierre and current welterweight contender Rory MacDonald.  Despite the caliber of coaches and fighters at Tristar, it wasn’t the best fit for him.

“I was doing a lot of things that I didn’t agree with sometimes but I did them anyway just out of respect for the skill base there. I’ve definitely learned a lot of things.  I put a lot of unneeded pressure on myself.  I’ve learned a lot from it.  I’m just sticking close to home and going back to my roots a bit.”

Whittaker, who is partly of Maori heritage, has opted to prepare in Australia and New Zealand for his fight against Rhodes. He now has more control over how he trains and is closer to his loved ones.

“Being home I have a routine that is designed for me, that I’ve developed over the years through trial and error.  I have routines for how I get fit, how I get ready to spar, how I get ready to fight, how I work pads and the support base is here.  I have my friends and family, and they’re a big contribution to the mentality that I take into fights.  All that combined leads to a happy fighter.”

Despite his stint overseas, the central influence in Whittaker’s fighting career has remained Henry Perez, his Sydney-based coach who has trained him since his teen years.

“He’s had the most influence.  Me and him working together has shaped who I am now and shaped the way that I fight. I’ve been with him since such a young age and I’m still with him.  Without him I wouldn’t be who I am today.”

While a loss against Rhodes would mean a dreaded three-fight losing streak for Whittaker, he says he doesn’t feel any additional pressure.  And at such a young age, he has time for a few slip-ups.

“Coming off two losses is hard but I don’t feel any more pressure from it.  I feel I had to learn a lot from those (losses), I had to get those to get my eyes open a bit and tune things out a little bit more.  I’m going to come out in this next fight better for it, with a skill set, arsenal, and comfort level that hasn’t been seen yet from me and it’s going to be awesome.”

Clearly, Whittaker has dealt with the doubts that might creep in after two losses the only way he can.

“For me, the doubt hits you just before a fight.  The only cure for that is hard training.  The doubt never really affects me after a fight because it would've been there beforehand.  I’ve trained my absolute ass off, I’ve trained to the best of my ability and I have not a doubt in the world.”

Discipline is also a strong suit. Unlike many young athletes, Whittaker manages to steer clear of the temptations of drinking and partying.

“A little while ago it might have been a little bit harder (to avoid that lifestyle) but lately I’ve really come to grips with who I am and what I do and what I want to do.  Once I made that decision it’s pretty easy.”

The focus of Whittaker’s disciplined preparation is 6-foot-1 welterweight Rhodes.  A well-rounded fighter, “Biggie” has wins by both KO and submission, and he is also member of the Rufusport MMA team alongside current UFC lightweight champion Anthony Pettis. But Whittaker is ready.

“Mike Rhodes definitely has a complete set of skills.  I’m going to go in there with my own arsenal and I’m going to throw every weapon I have at him and see how he fares afterwards.”

Whittaker says he does have a game plan for the fight - but it won’t be based on reacting to what his opponent brings into the UFC’s Octagon.

“The whole training camp I’ve been just honing my skills, honing the edges of my weapons.  I’m going to incorporate my game plan and just throw it at him.”

While Whittaker says he’s prepared for anything, the hard punching Kiwi-born fighter is hoping for a stand-up war in front of his home crowd.

“I like standing up as much as the next bloke (laughs), so hopefully we can make this an exciting fireworks fight.”