Nik Lentz: The Year of The Carny 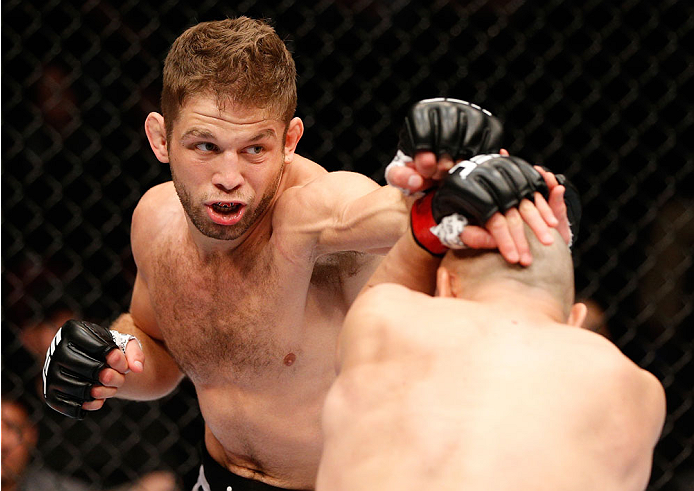 Rematches are always interesting, whether they happen four months or four years apart. But in the latter case, so much has usually gone under the bridge for both combatants that it’s practically a new fight.

That’s the way things are shaping up for this Saturday’s UFC Fight Night co-main event between Nik Lentz and Charles Oliveira. Back in 2011, the then-lightweight prospects put on a Fight of the Night scrap that ended in a no contest after an illegal knee by Oliveira.

Today, Lentz and Oliveira have become standout contenders at 145 pounds, with both believing a second fight was inevitable. But neither featherweight is the same fighter he was that night in Pittsburgh. They’re both better, and in Lentz’ case, it isn’t just his Octagon game that has improved, but his outlook on life, sport, and the way they intersect.

“The first fight, I let life distract me,” he said. “That was the first time my dad had a reoccurrence of cancer, that was the first time a lot of my training partners in Minnesota were retiring or leaving the gym, and instead of going to a new gym like I did afterwards to ATT, and instead of finding new coaches and doing new things, I didn’t do anything about it. I pretended that all these bad things weren’t happening, and it showed in the fight. Warming up for that fight I got tired because I didn’t train for the fight. I had let life get to me. And one of the biggest lessons I learned is that you have to be able to keep all those things together. Life and fighting and training are one in the same, and if you let one slip, the other one slips just as much.”

Following the first fight with Oliveira, Lentz moved to Florida to work with American Top Team, dropped from lightweight to featherweight, where he has won four of five bouts, and his personal life has taken a turn as well, as his father is doing well and his girlfriend Elissa has now become his wife.

Add everything together, and life’s a lot different for the 30-year-old than it used to be, but as he points out, it wasn’t one fight against Oliveira that changed everything, but several years finding out what works in this toughest of sports.

“It took me many years in the UFC and outside the UFC to find the proper balance,” he said. “A lot of times I would train so hard and train so much that my personal life would fall apart. Now I have a wife that keeps track of me, I have coaches that care about me, I have all these safeguards and people that can see my life and see where it’s going so that’s never going to happen again. But it’s very easy as an athlete to lose perspective of life outside of the sport, and when that happens, your performance drops dramatically.”

Just one look at Lentz’ run at 145 pounds shows that his philosophy is an accurate one. He’s lost just once – via decision to Chad Mendes in December of 2013 – and though he rebounded from that defeat with a May 2014 victory over Manny Gamburyan, that was his only bout of 2014, with fights against Oliveira, Thiago Tavares and Levan Makashvili all falling by the wayside.

“These things happen in life, and before, I would let life run me and let the events shape where I was going,” he said. “But now, I look at it and say ‘I’ve never gone through this in my career.’ I’ve never been injured, I’ve never had fights canceled, I’ve never had to deal with this. And every fighter, at some point, has to deal with an injury or something, and it was just my turn. It was bound to happen through the law of averages. So I don’t look at it bad. I’ve been training with world-class people nonstop, I feel better than ever, I’m in better shape, I’m stronger and it was actually kind of a nice little break to recuperate my body and now I feel stronger than ever.”

It’s obvious that Charles Oliveira will be meeting a different Nik Lentz than he did in 2011, and those in the media will agree that “The Carny” has certainly changed from a guarded and shy young man to one who is more than comfortable in the public eye and in telling his story.

“My whole life I’ve been an introverted person,” he admits. “I’ve lived a very different life than a lot of people. I started out with little money, little friends, and had to take care of myself from a very young age, so I was a very guarded person and I wasn’t that open. And the truth of the matter is, when I first got in the UFC I wasn’t that confident. All I was was a really tough guy. I could take a punch better than anybody but my technique suffered. And I didn’t get to that next level of technique and confidence because it wasn’t there. And now that I’m a hundred percent sure that I am one of the best fighters in the world, it shows. It’s very hard to fake confidence. You can only do it for a little bit. Old Nik Lentz couldn’t put on that face long enough. But now you put a camera in front of me and I’ll tell everyone that I’m the best fighter there is.”

He’ll also tell you that while he was one and done in 2014, in 2015, he’s got very specific plans for world domination.

“2015 is the Year of The Carny,” Lentz said. “I’m going to make the title run and I’m going to be beating people up. After I beat Charles up I want a top five opponent, and after I beat him up then I want the title.”