Ngannou ready to get it done against Lewis 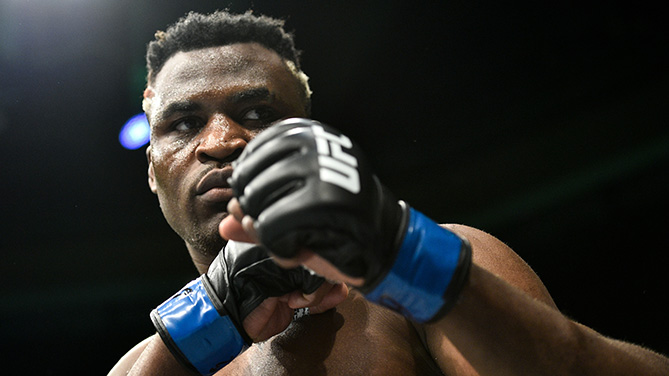 That’s how Francis Ngannou describes his training camp and subsequent performance against Stipe Miocic at UFC 220.

Seven weeks after sending Alistair Overeem into The Odinsleep with a hellacious uppercut at UFC 218, the surging contender was standing across the cage from the reigning, defending, undisputed heavyweight champion in the main event of the first Pay-Per-View of 2018. He was presented as a one-in-a-million prospect and destroyer of worlds, but on that January evening in Boston, Miocic showed that experience and preparation remain crucial factors in the fight game.

“Many things went wrong for me,” said Ngannou, reflecting on his unanimous decision loss to Miocic as he readies to take on Derrick Lewis this weekend at UFC 226 in Las Vegas. “That fight, the training camp was a mess because when they gave me the fight, it was six weeks before the fight and that’s when I realized my team was not here and I needed to go all the way back to Paris.”

Two weeks before the fight, Ngannou made the transatlantic trek back to Paris to consult with his longtime coach Fernand Lopez. Coupled with the strain that comes with preparing for a fight and the added attention of challenging for the UFC heavyweight title in a Pay-Per-View main event, the lengthy aerial voyage from Las Vegas to Paris and back again only added to mounting weight on Ngannou’s shoulders.

For the first time in his UFC career, the heavyweight knockout artist was stressed and it reflected in his performance.

“All that stuff stressed me and put pressure on me and I still didn’t fight like I should,” he said. “I didn’t follow the game plan. Everything was messy. My striking wasn’t good. When I look at the fight, I can’t recognize who is in that fight; it doesn’t seem like me.”

Fight week check-in, everything is on point for Saturday night. Let do this #ufc226 #thepredator pic.twitter.com/YIHTtqL3E5
— Francis NGannou (@francis_ngannou) July 3, 2018

But they say you learn more from your losses than you do your triumphs and Ngannou believes that wholeheartedly, admitting that the painful setback to Miocic helped prepare him for the peripheral obligations that come with having your name atop the marquee and prompted him to make changes to the way he organizes his fight camps.

Although Lopez has made the trip to Las Vegas this week, Ngannou prepared for his showdown with Lewis under the watchful eye of John Wood at Syndicate MMA, spending the last two months crafting a strategy for getting back into the win column this weekend when he finally squares off with the Houston-based knockout artist.

“It has been over a year that I have been thinking that this fight was going to happen,” Ngannou said of his pairing with Lewis, who collected a third-round stoppage win over Marcin Tybura last time out and carries a 19-5, 1 NC record in the Octagon on Saturday. “I have been waiting for this fight. When they asked me for the fight, I was just like, ‘Yes, it’s time to get this done’ because after my last fight, Derrick was talking his b*******.”

One of the most active fighters on social media in the UFC, Lewis has been angling to share the cage with his fellow finisher since Ngannou first started building momentum in the heavyweight division and while no one is immune from feeling the wrath of “The Black Beast” on Twitter, the man he’ll face this weekend has been one of his favorite targets.

Initially, Ngannou wanted to play along and trade jabs with Lewis, but he thought better of it and the more it has persisted, the more annoyed he has become.

“It’s annoying; it’s not funny to me,” he said of his opponent’s social media snipes. “When he started to do that, I wanted to reply, but at some point, I just realized that he is going to make me look silly, so I’m not playing his game.

“He might want to be silly, but not me. He can go back-and-forth with himself.”

While getting under Ngannou’s skin was surely the intention, it may not have the desired effect because just a few days out from their colossal encounter in the middle of Saturday’s UFC 226 Pay-Per-View, “The Predator” is focused solely on learning from the mistakes he made in his fight against Miocic and leaving the cage with his hand raised by any means necessary.

“I had pressure for the fight against Stipe and that was a mistake; that’s why I didn’t control my fight,” said Ngannou. “I threw out my game plan and went crazy for the first round, so I’m not putting any pressure on myself now. I don’t give a s*** what anyone thinks – I just want to fight my fight, follow my game plan and win the fight.

“To give a prediction and trying to win in some way is pressure,” he added, “so the win can come any way.”