“They end up in a street fight when they're not ready for it. They're thinking ‘this isn't my gameplan’, but I bring them into it. If I can do that, then I think I'm winning the fight.”

The show must go on. Especially when a four-time “Fight of the Night” winner is involved. 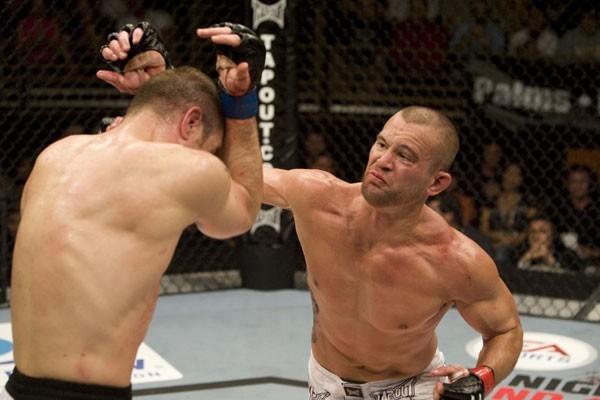 This weekend at UFC 127, making his 19th appearance in the UFC Octagon will be the hugely popular fan favorite, Chris Lytle. “Lights Out” is currently riding a four fight win streak dating back to his last loss over two years ago in a hotly contested split decision to a fellow UFC veteran with a professional boxing background, Marcus Davis. On this fateful Saturday night, Lytle will put that win streak and his place in the welterweight title hunt on the line against the “Bad Boy”, Brian Ebersole.

The question all curious UFC fight fans want to know is, who is Brian Ebersole and why is he fighting our beloved slugger?

The short answer is that Lytle was originally scheduled to face former WEC welterweight champion Carlos Condit. Unfortunately, Condit injured his knee in training and had to pull out of the fight. Ebersole is Condit’s replacement.

The original fight was almost too good to be true. “The Natural Born Killer” had hit his stride in the UFC with a three fight win streak capped off with a first round knockout of England’s own Dan Hardy in England, making him maybe the most hated UFC welterweight on the British Isles. Lytle and Condit were paired together not only for their winning ways arranging them for a possible title shot, but they both share a breakneck speed fighting style that clearly had potential for another “Fight of the Night” bonus.

“I was excited,” stated Lytle, 36, of his former would-be opponent. “We were supposed to fight once before and he is the type of fighter I want to fight.” Lytle and Condit were scheduled to fight in September of 2009 and that time it was Lytle who was forced to withdraw with a knee injury.

As for why Lytle and the UFC like this matchup so much they have tried to make it twice, it boils down to Condit’s “killer” style. “He is aggressive and looking to finish fights. It's the type of fight I want with the both of us coming after each other and not looking for a decision. It’s a fight you better train hard for because he is coming after me the same way I’m coming after him.”

The unexpected happened and sidelined the Indiana native’s original dance partner, but the UFC immediately found him a new one: Brian Ebersole. The “Bad Boy” will be making his UFC debut in this fight, nevertheless he is both an experienced fighter with over 60 fights to his name and a big welterweight at 6-0. Ebersole, like Lytle, is from the Midwest (Illinois), has had a remarkably long career (began in 2000), and has a penchant for finishing fights (33 of his 46 wins), with the majority of his stoppage victories by submission (20).

“It’s gonna be tough. It’s kind of a last minute change for me and I’ve been training for one style of fighter (Carlos Condit) and Brian’s different. He’s a veteran, he’s been around a long time, and one thing I’ve noticed about him in the past several years is that he’s hard to finish and he has an ability to make other fighters look bad. He’s gonna make you earn every second of a victory against him, so it’s gonna be a tough fight.”

Lytle has also been around a long time and knows that no opponent should be overlooked, especially one with as many wins as Ebersole has. But there are two things working in favor for “Lights Out” against Ebersole: he’s fought in Australia before and Lytle always fights like a man possessed.

As for the former, Ebersole will have some home field advantage in this matchup considering he has been fighting regularly in Australia since 2006, but Lytle is not foreign to the trip Down Under, and he specifically requested to be on the card. Around this same exact time last year at UFC 110 in Sydney, Lytle defeated up-and-comer Brian Foster via a kneebar earning him Submission of the Night honors. “It was fantastic,” relates Lytle about his first trip to Australia. “The crowd was there from the beginning of the first preliminary to the end of the very last fight. They were excited, very knowledgeable and they were nice, so it was awesome.”

Consequently for Ebersole, no matter where this fight takes place, he has to fight Lytle and his double-fisted fastball striking. “I think people think they can prepare for it, but it is a lot different when it actually happens,” affirms Lytle about what has become his fighting trademark of basically throwing every punch to end the fight. “I think the best way to train for me would be to continually going against guys of my style with a new one in there every round, so they know what it is going to be like for 15 straight minutes of that.”

“Lights Out” has always been a dangerous opponent, but it was one fight in particular that turned his jabs into all-out chin-seeking missiles. This change noticeably took place after Lytle’s tedious split decision loss to friend Matt Serra in The Ultimate Fighter season 4 finale. Lytle says he fought not to lose instead of to win and has vowed never to repeat that. Since then, he has become arguably the most exciting fighter on the UFC roster, earning seven win bonuses in 12 fights. “I went through a change and a change like that changes you to the core. I can't see fighting any other way now.”

What is even scarier than Lytle gunning for your head the whole fight is that he’s becoming better at it. “I know how to pace myself and catch a break every now and again,” Lytle continues, noting that all of his cage and gym time have taught him how to relax and how to breathe to keep up this unusually high pace. “It's just hours and hours in the gym sparring and fighting. It comes with experience. I don't think guys who have only had five fights can go out there and fight like that because it comes from the hours and experience in the gym.”

There are simply higher stakes in fighting Lytle nowadays.

“If I'm throwing 100% and they're throwing 75% back, then I'll take that all day long.” A lot of fighters talk about wanting to land that fight-ending shot, but Lytle does not wait around looking for it. He doesn’t hold anything back with his stand-up, as he is emptying his holster and going for a killshot with every wind-up. “They're going to realize quick that they need to be throwing a lot harder and quicker back at me or they're going to get knocked out quick.”

This full-time firefighter, husband, and father could not be any more comfortable in all out haymaker throwing wars and he prefers it that way. “I think that is one of the areas I've improved on: bringing these guys to my level,” says Lytle, who wants to dictate the pace of a fight by escalating it into a slugfest for the ages. “They end up in a street fight when they're not ready for it. They're thinking ‘this isn't my gameplan’, but I bring them into it. If I can do that, then I think I'm winning the fight.”

If that was not enough for Ebersole to worry about, the fight doesn’t end for Lytle when it hits the ground. “I think some people are thinking about me as only being a stand-up guy who throws a lot of punches, but I’ve had a lot of wins by submission,” remarks Lytle of his not as often mentioned Brazilian Jiu-Jitsu skills and numerous submission wins. “I don't know if they're just happy once they get it off the feet and they relax for a second and I catch them on the ground. I'll keep talking about stand-up and let them keep forgetting about the ground.”

At UFC 127, Brian Ebersole will be doing a yeoman’s job filling in for Carlos Condit and not depriving the fine Aussie people of another action-packed Chris Lytle fight. Whether the fight stays on the feet for a white knuckle slobber-knocker or hits the floor for some vastly underrated and crafty submissions, Lytle is going for the finish and delighting fans everywhere.