Muhammad looks to thrill again, but win this time 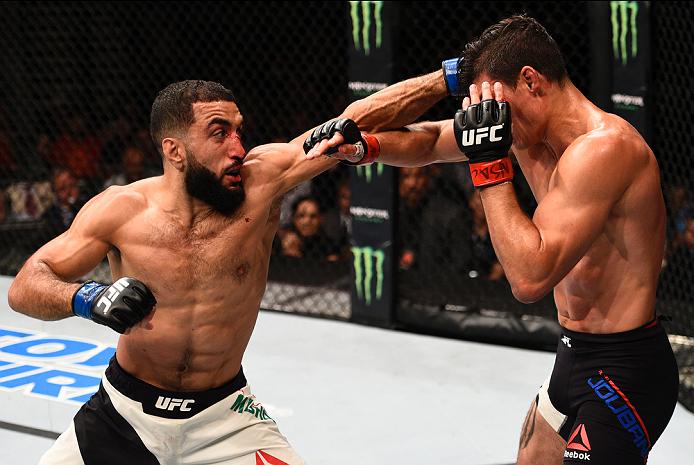 The game plan was simple for Belal Muhammad in his UFC debut against Alan Jouban on July 7: Take his opponent down and keep him there for 15 minutes. Then Muhammad stepped into the Octagon for the first time at the MGM Grand Garden Arena in Las Vegas.

“Once you get into the cage and you see all the fans, it makes you want to put on a show,” Muhammad said.

He did. Unfortunately, in the first round, Muhammad’s role was as the B-side on Jouban’s highlight reel, as he was knocked down twice and nearly finished.

But then a funny thing happened. Muhammad didn’t go away. He survived that horrific opening frame, answered the bell for rounds two and three, and during those rounds, he gave Jouban hell, even shaking off another knockdown in the second frame to roar back and nearly stop a tired Jouban in the final round.

Muhammad would ultimately lose a decision, but the Fight of the Night battle guaranteed that fans would remember him, a nod to his moniker, “Remember the Name.”

“It was a learning experience,” Muhammad said. “That was the first time I ever got rocked in a fight, so I know how I’ll react now. I learned that I will stay calm under pressure and be able to keep my wits about me even if I do get rocked. I’ll keep pushing forward and show people that I have enough heart to go to the end, no matter what. Some guys will lose the first round and they’ll lose momentum and quit on themselves before the third round even starts. But it make me stronger and push even harder to the end.”

The day after the fight, Chicago’s Muhammad was witnessed walking through the lobby of MGM Grand with barely a mark on him. He laughs.

“I didn’t get any injuries in that fight and I felt good. I probably had two stitches on my nose, but that was basically it. No big bumps or bruises. I was able to start training the next week. I was happy. It was a three round war, but it wasn’t one of those Robbie Lawler-Rory MacDonald wars where they’re both in the hospital.”

There would thankfully be no hospital trip for Muhammad, but he did get another fight, this Saturday in Hidalgo, Texas against Mexican veteran “Dodger” Montano. Stylistically, the potential is there for Muhammad to pick up another bonus, and he agrees, but he’s a bit particular about the bonus he wants.

“This time I’m trying to get a performance bonus, not a Fight of the Night bonus, so I hope I end this one quick,” he laughs.

He may just get his wish, because on paper, he should be even stronger the second time around, given that he didn’t have to fast for Ramadan like he did pre-Jouban. But when you ask the 28-year-old about the effects of the fast, he says there weren’t any negative ones.

“If anything, it made me stronger because I was going through two or three practices a day without drinking or eating,” he said. “It makes you push yourself to a whole other level mentally. So I think it helped me, honestly.”

That’s a bold statement, and one worthy of respect, simply because of all the folks who are religious in name, Muhammad isn’t talking about his faith; he’s practicing it.

“I’ve been a practicing Muslim for a while, and I’ve been a strong, practicing Muslim,” he said. “So I was never going to say no to fasting or anything like that. People asked me why I still took the fight, and I’m just one of those guys – I’ll never turn down a fight. I love to fight, and it was the biggest weekend of the year, so I couldn’t turn that fight down. Especially Jouban – I knew that would be a good, exciting fight for me, and I want to have exciting fights so the fans know who I am and remember me. And it ended up turning out like that.”

Yet if Muhammad would change one thing about the lead-up to the Jouban fight, it would be his insistence on watching tape on his foe for the first time. He said that won’t happen again.

“For this fight, I haven’t really looked at any tape of my opponent,” he said. “With the Jouban fight, I think that was a mental thing that messed me up. I’m not a big video watcher. I usually work on myself and work on my game to get better rather than compete with anybody at any level of the fight. With the Jouban fight, I thought about it too much and I watched a lot of his tape, thinking, ‘Oh, he’s gonna do this if I do that.’ With this fight I’m not watching any tape on him; I’ve been watching a lot of tape of myself, working on my weaknesses. So it’s just gonna be a better version of me. I really haven’t been paying any attention to him at all.”

“I’m a fight fan too and I like to watch exciting fights,” he said. “I don’t like watching a guy hold someone down the whole time. So I’m going to put on a show.”