"I wouldn’t want to change anything when it comes to how my career and my life have gone." - Mike Brown 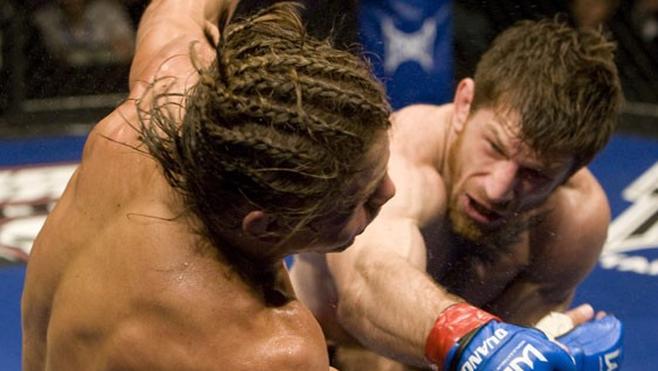 “He reminds me of myself a little bit,” said Brown. “He uses a lot of the same techniques that I do, he doesn’t throw pitter-patter punches to set things up, he likes to throw down hard and he’s looking for a submission. He’s like a puncher / jiu-jitsu guy mixed and that’s kind of what I am.”

So as the Saturday night bout approaches, is that a good thing or a bad thing? Will Brown feel like he knows what Pineda will do before he does it, or will he just be in for a long night? Because let’s face it, who wants to fight someone as tough as Mike Brown?

“Sometimes I think that too,” he laughs. “I think a lot about my competition and how tough they are, and I say ‘well, I wouldn’t want to fight me either.’”

Why would they? A veteran of over 11 years in the pro game, a former world champion, and a man with wins over Urijah Faber (twice), Yves Edwards, Jeff Curran, and Leonard Garcia, the native of Portland, Maine is as battle-tested as they come in the featherweight division. Pineda only has two fights in the big show (albeit two submission victories). But don’t tell Brown that.

“I never overlook anyone,” he said. “The guy could be 1-10 and I would be nervous. I find what they’re good at and I always see positives in every opponent that I fight. I think of their good points, not their bad points.”

That’s a solid mindset to have, especially after seeing practically all there is to see in the fight game. At 36, Brown takes nothing for granted, and as a UFC fighter now, he is aware that there are some people out there who don’t even know what he did in the WEC, where he was the top featherweight in the world for a time. But he wouldn’t change a thing.

“Sometimes I say if I was the champ two years later, I would have been the UFC champ and would have made a lot more money and all that,” said Brown, who held the WEC belt from 2008 to 2009. “But I’m really happy with my life and I’m very happy how everything unfolded. Had any little thing been different, maybe it wouldn’t have happened, so I’m happy with how everything turned out. You know how they say the tiniest little thing, if you wait five seconds to leave your house later, your whole day could be different. So I wouldn’t want to change anything when it comes to how my career and my life have gone.”

Not that Brown is hoping to live off past glories. Last August, he broke a three fight UFC losing streak by winning a unanimous decision over Nam Phan, and while it was a feel good victory for all of those who had watched the Octagon struggles of the always classy Brown, the American Top Team standout didn’t get overly excited about it.

“It didn’t feel like anything special, it was just another win,” he admits. “It wasn’t the most exciting and I didn’t finish him, but it wasn’t a bad fight. It is always a lot more dramatic when you get the finish, but it did take that monkey off my back a little bit of getting my first UFC win because I did have a lot of success in the WEC and I didn’t want it to end there. I wanted to have a strong showing in the greatest show in the world.”

So we’re all just hopeless romantics then?

“I don’t get overly excited when I win,” Brown explains. “I don’t over celebrate, and I’m not the guy that does a celebration dance. I’m content, I’m happy, I get the job done and move on. Unless it’s a dramatic finish, then you might get a little more out of me, but when you do what you’re supposed to do, it’s not overly exciting. Of course I’m happy, I got that first UFC win, and I do have the gloves in a glass display case in my man cave, so it has special meaning to me, but I hope it’s the first of many.”

Unfortunately, Brown didn’t get the chance to keep the momentum going and strike while the iron’s hot, as injuries kept him out of a January bout with Vagner Rocha. It was a disappointing setback, but after fighting three times in 2011, maybe Brown’s body was telling him to take the foot off the gas a bit. Looking back now, he appreciates the time away – at least some of it.

“It was nice to take a little break, but I was always trying to get back and ready to fight,” said Brown, 25-8. “It’s hard when you’re doing a camp and then you get injured and then you get pulled out of it and you have to start over again. So although I took a lot of time off, some of that time was spent preparing for fights, and they just didn’t happen because of injury.”

You won’t hear Brown complaining though, and that’s just his personality. He’s a blue collar fighter, one that shows up for work, punches his time card, and leaves it all in the gym or Octagon before clocking out. The next day he’ll do it again. That comes from a history of work before and during his fight career, one in which he pumped gas, was a produce clerk, worked an overnight shift at a gym, was a mover, and even worked at a cemetery at various times. So when he was able to train and fight full-time, it was not just a revelation for him, it was a life changer.

“It makes me appreciate what I do, and no matter how tough it is, that 15 minutes, it’s a lot tougher grinding out a 10 hour a day job that you can’t stand,” he said. “I’d much rather go through 15 minutes of hell than 10 hours of something that you don’t like doing for 300 days a year. It definitely helps me push through those tough moments, because now you’re doing something that you love.”

And despite the ups and downs, that love has never wavered.

“MMA is still my passion,” said Brown. “If nothing else, there’s nothing cooler than MMA. There’s no doubt about it. I’m a fan, I’m a junkie, I watch every show on TV, and it’s what I do and what I love. And I’m 36 years old and not old enough to retire, so I’m still working. I still gotta get up like everyone and go to work. And I couldn’t think of a better way of doing it than fighting in the UFC.”