Michael Chiesa vs. The World

"The one thing I regret the most about my loss is that I exhibited poor sportsmanship." - Michael Chiesa

For The Ultimate Fighter 15 winner and Spokane native Michael Chiesa, UFC 173 in Las Vegas is a homecoming of sorts.

Vegas holds many good, and a few sad, memories for the lightweight.

It is the place, after all, where he realized his dream of fighting in the UFC, by fighting his way through a grueling 13 week tournament in front of the nation on TUF 15. It’s also where he learned of the passing of his loving father Mark, whom Chiesa says has always been his inspiration.

“I try to live by my dad’s code,” says Chiesa. “He showed me the definition of hard work. He was a guy who showed up every day and did his job to the best of his ability. Do I wish I could talk to him, pick up the phone and get his advice? Sure, but at the same time I am a very spiritual person, and I know he’s above me and looking out for me and my family. He’s not here physically, but morally he’s instilled enough in me to live my life with respect and integrity.”

> Watch: Season 15 of the Ultimate Fighter on UFC FIGHT PASS!

Chiesa will need all the inspiration he can muster when he faces one of the strongest and most physically imposing fighters in the division in Francisco Trinaldo. The 35-year-old Brazilian has made his presence known in the UFC, with victories over Mike Rio, CJ Keith and Jesse Ronson.

And while Trinaldo isn’t one who many fans would say is a major blip on their radar, Chiesa knows exactly who he is.

“I’m one of those guys who pays attention to my division, sees where guys are improving, watches all the fights and you know, Trinaldo has a great kickboxing background. He’s a Brazilian national champion. He’s a former training partner of Thiago Silva. He trains jiu-jitsu with Sergio Moraes. He’s a well-rounded opponent, really big for the weight class and he’s very athletic. He’s huge, he’s one of the biggest guys in the division. I don’t think his being 35 years old is a disadvantage at all. Look at guys like Anderson Silva and Vitor Belfort, these guys age like fine wine. So when I tell people I’m fighting a 35-year-old guy people think I’m going to have it easy, but I know I’m getting myself into a firefight here,” he said. 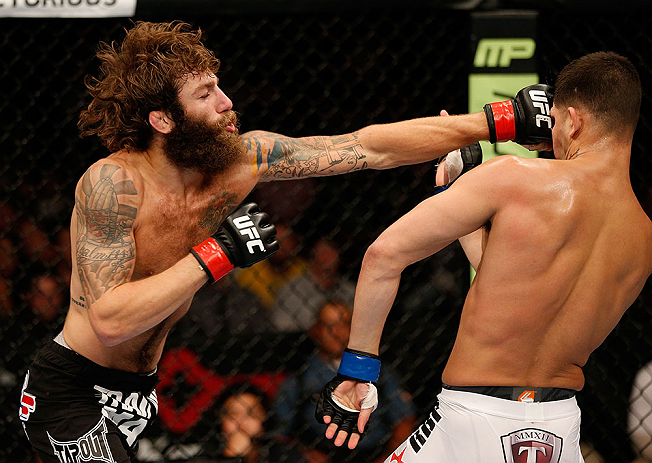 Chiesa knows better than to look past anyone in this sport. He did that once, against Jorge Masvidal. Michael thought he’d be able to out-grapple him, take him down and roll him up with superior jiu-jitsu. It didn’t go down quite that way, and with just one second left in round two, Chiesa tapped.

“It haunts me every day of my life,” he said. “Looking at where Masvidal is ranked now, that should be my spot, but in a perfect world in this sport, we all want to be undefeated, we all want to be world champions, but it just doesn’t happen that way. We all have to lose at some point and I learned a valuable lesson in that loss, and fortunately for me he’s one of the fiercest competitors in the division and everyone respects him, but sure, that one second will haunt me ‘til the day I die.”

For Trinaldo, that’s not very good news. Chiesa is a thinking man. Much like Ryan Jimmo is a Master level chess player, Chiesa is relaxed. He’s kind. He’s cerebral.

“I pride myself by not looking or acting like a cliché fighter,” he said. “I am laid back and I’m really gentle. When guys call me out or trash talk me I brush it off. I fight for a living. It’s who I am. People don’t go out and have to act like themselves. They just are themselves. I’m not defined by what I do for a living. But there is one thing I live by: this is how I make my living, so I’m not ever going to do it for free. Guys who build houses don’t go out and build a house for fun. So you’ll never hear any story about me acting like a tough guy or fighting some guy in a bar. That’s not my deal.”

On one hand, Michael tells me he’s not one to look back on a loss, on the other however, he says the old adage that a fighter remembers his losses more than his wins holds true.

“You train to win fights but the biggest lessons you learn in this sport are coming off a loss,” he says. “It’s hard to find light in the darkness, but one thing I did learn is that I can compete with anyone in the division, because Masvidal can fight Anthony Pettis tomorrow and he could win. Everything happens for a reason. I was winning. I blew him out in the first round and I faded a bit in the second and it haunts me every day. That’s why I’m one hundred percent focused on Trinaldo. I’m expecting him to be great everywhere. That’s how I’m approaching every fight from now on.”

The change has served Chiesa well. Following his lone career loss, he bounced back with an impressive submission win against Colton Smith at the UFC Fight for the Troops last November. It also serves him well when training camps gets tough.

“When I’m having a down day I think about that one second, and it motivates me to keep training because I’m never going to lose a fight by one second ever again.”

They say failing to prepare is preparing to fail. It holds true in all sports, but especially wrestling and mixed martial arts. But there is another aspect to this sport that all too often goes overlooked, and that is media training. How often do we see fighters who could have it all, yet always end up on the wrong end of a Tweet or interview?  Chiesa is well aware of how mistakes outside the Octagon can be as detrimental to one’s career as mistakes inside of it.

“When I won The Ultimate Fighter I looked at guys who were in the same position I was in before me, and I looked for the best case scenarios of those guys, and the worst case scenario,” he said. “I decided right away I wanted to be in the best case scenario category. I want to be with the UFC long after I stop fighting. I want to be a fight analyst like Daniel Cormier and Chael Sonnen. I want to be the guy analyzing fights and putting things in perspective for the audience in terms they can understand, but coming from a guy who’s been in the cage and who has reached a certain level of success. I love my job. I’m not afraid to show what kind of person I am and to give my opinion. When I talk to you guys in the media, I want you to remember me. I want people who read your interview with me to remember me. That’s part of my job. A big part of my job. Winning is paramount, but talking to the media is just as important. How else can one connect with one’s fans? At the end of the day this is a business.”

And if there’s one thing worse than losing, at least for Chiesa, it’s showing poor sportsmanship after a loss. Fans may recall Chiesa sprinting from the cage after losing to Masvidal. It’s a moment he wishes he could take back even more than the moment he tapped with just one second left in the round.

“The one thing I regret the most about my loss is that I exhibited poor sportsmanship,” he said. “I 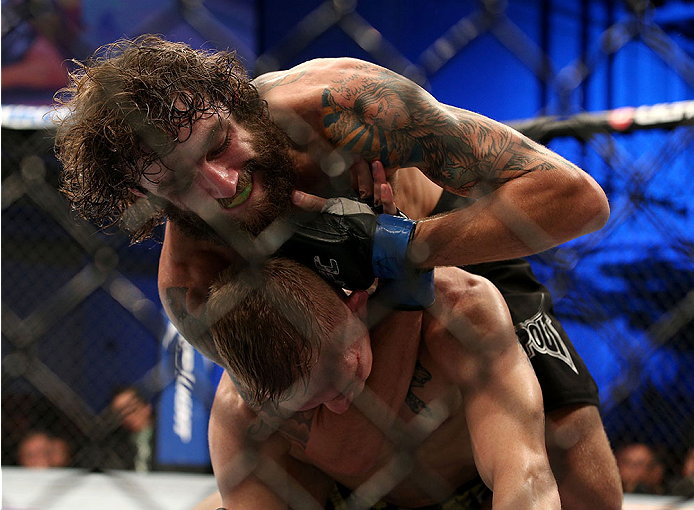 coach high school wrestling, and when I ran out of the cage after I lost to Masvidal, I did not exhibit good sportsmanship. I’m ashamed of it. I didn’t know how to handle the loss, and I handled it very poorly. I was thinking too much about what a win over Masvidal would have done for me in the division, and when I lost I was so emotional that I didn’t show respect to Jorge the way I should have. The first day of wrestling practice after that I told the guys ‘I need to get something off my chest. Exhibit good sportsmanship, I didn’t and I regret it.”

For guys like Michael Chiesa, there are no tougher critics then themselves. And those guys can crash and burn or they can soar with the eagles. If I’m betting, I’m betting on the latter for this young, creative and inspirational fighter. Win or lose, Michael Chiesa will be the epitome of what a UFC fighter is all about.