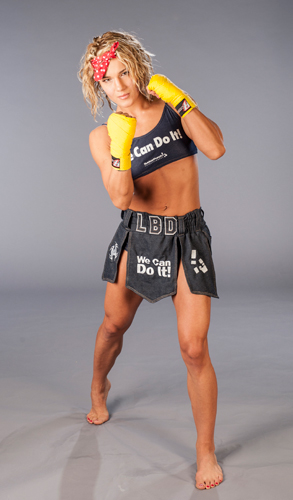 Reality television shows are popular mainly because it’s the theater of the unknown. This is doubly true of The Ultimate Fighter, a show in which its competitors don’t just get locked away from the outside world for six weeks, but have to fight each other to advance.

And when the cameras start rolling for season 20 of TUF, expect the ante to be upped considerably, as there will be no fights between future world-class operators and someone with a made for TV personality who made it into the competition because of a record built up against cupcakes. The 16 115-pound ladies who will get the call for the show are the best strawweights on the planet, making each fight tougher than the last.

That’s stressful enough, so as the days tick away until the start of filming in Las Vegas, each fighter tries to get whatever edge they can before moving into the fishbowl for a month and a half. And few, if any, have more positives already in her corner than Felice Herrig.

First, Herrig has been through this whole fighting reality show thing before as a cast member on 2007’s Fight Girls. Second, she is no stranger to the media attention that will engulf her and her peers before and after the show, as there is probably no female fighter not named Rousey, Tate, or Carano who has been in the spotlight more. Third? She can fight, and she’s doing everything possible to prepare for the most important moment in her career.

“I have been training since the day I got the phone call from (UFC president) Dana White,” said Herrig, who has reached deep into her pockets to get ready for TUF, spending on everything from flying training partners in to working with a sports psychologist. There are no stones being left unturned for the “Lil’ Bulldog,” who has also been getting plenty of good advice from her coach, UFC / WEC veteran Jeff Curran.

“He’s been telling me that it’s a whole new ballgame,” she said. “It’s not even just about the fight itself; it’s about the media and you have to be willing to do a lot more. I’m used to doing a lot of media before fights, but he’s telling me that I need to be prepared for it and I really need to step up my game now as far as training and everything. I’ve always been super dedicated, but he’s trying to push me to that next level because he knows that all the girls that are in the UFC are at the top of the division. It’s not like you just go in and have an easy fight. Every fight is going to be the hardest fight of your life.”

Daunting, yes. Knowing that to make it to the TUF 20 finals you have to fight and win three times, that’s even more so. But that’s what fighters like the 29-year-old Illinois native signed up for all those years ago – the opportunity to compete on the sport’s biggest stage. At times though, it looked like those opportunities would never materialize.

“I was ready to hang it up because I’ve been fighting for 13 years now and I wondered where this was going,” said Herrig. “You see these bigger girls getting all these opportunities, and you’re kind of like, is it ever going to be that way for me? Am I going to be past my prime by the time that opportunity does come? But I believe everything happens for a reason, and I’ve been on this path for a long time and I believe this is meant for me. As much as it’s hard, you don’t get any of the good rewards without having to go through all the struggles. So I’m embracing the struggle and the grind and I know that good, positive things are gonna come from it for me.”

And when the first eight TUF 20 competitors were selected (the other eight will be determined from the recent tryouts in Las Vegas), Herrig’s selection was a no-brainer. 23-5 as a kickboxer, with nine wins in 14 MMA bouts, including victories in four of her last five, she’s got the goods when it comes to fighting. As for marketability, she’s got that covered too, even if some assume that because she’s easy on the eyes, she can’t fight.

“I get that a lot, and let’s be honest, people pay more attention to the other stuff,” she admits. “So if they pay more attention to the looks and the sex appeal, that’s all they’re really noticing and they don’t take the time to notice ‘oh, she’s actually a good fighter.’ I think people want to look at the negatives of it, and if you’re getting attention in one area, people are automatically like ‘oh, you’re cocky,’ and ‘oh, she’s good looking but she can’t fight,’ or ‘she’s not really that good looking.’ I think a lot of people look at situations more from a negative aspect than from a positive one. When people look at it from a positive point of view, they’ll look at me and be like ‘well, good for her, girl power, she’s a good role model and she’s showing that you can be a woman and you can still fight.’ And people that look at me from a positive perspective know that I can fight, but those that look at me negatively automatically just assume that I can’t fight. And they may have never even seen one of my fights.”

It’s nothing the aforementioned trio of Rousey, Tate, and Carano haven’t gone through, but when it came time to deliver on fight night, they did. Herrig expects to have similar results, though as she approaches TUF 20, there is one of her fellow competitors that she hopes not to meet, and it’s a former opponent, Carla Esparza.

“It’s a little difficult because she is one of my best friends, and I don’t want it to change our relationship,” said Herrig, who lost a decision to Esparza in 2011. “But it’s also one of those things where we know going into the house what it is. It’s inevitable that it might happen, so I have to accept it. It sucks talking about it too, because I feel like the more we talk about it, the more people will try to push for that fight.”

Esparza isn’t too jazzed about facing Herrig again either, but they both realize that it’s a real possibility that it might happen, and if it does, Herrig will be ready for the rematch.

“She beat me three years ago, and I know that I’ve evolved,” she said. “Her wrestling is something that I had never seen before and it’s something a lot of women haven’t seen before. But I’m working with an Olympic wrestler right now, so as much as I don’t want to fight her, I’m definitely doing everything I need to do to beat her if I do fight her. And it’s not a vindictive thing, but if it does happen and it’s not by my choice, I’m still going to be prepared for it.”

As for the rest of the field, at least the other six that she knows about at the moment, Herrig has done a little scouting, but she’s mainly focusing on what she has to do to win.

“I know the girls I think I could beat and I know the ones that I think I would have a hard time with and those are the fights that would be real interesting,” she said. But as the sport evolves and there are more opportunities, the women evolve as well, and you can’t say that anybody’s last fight is the way they’re going to fight. So I’m trying not to think too much about it. I’m really familiar with all the girls, and already in my head I’m taking one specific thing with every girl that I need to look out for and I’m working on those things, but I’m also sticking to my game plan and training the way I train because you never know who you’re going to be matched up with and how much the girls are going to evolve until the show starts.”

And once it starts, get ready for a hungry bunch of strawweights eager to show that they belong.

“Not in a negative, spiteful way, but when women’s MMA came on the scene, it was Gina Carano and the heavier weights, and with Strikeforce and the UFC it was the heavier weight,” said Herrig. “So it was frustrating, but I work really hard and I knew that when the time was right, the opportunities would come for me, and here they are.”