"I only think of it as one more fight against a very tough fighter, and winning is always the only way to move up.” - Mauricio Rua 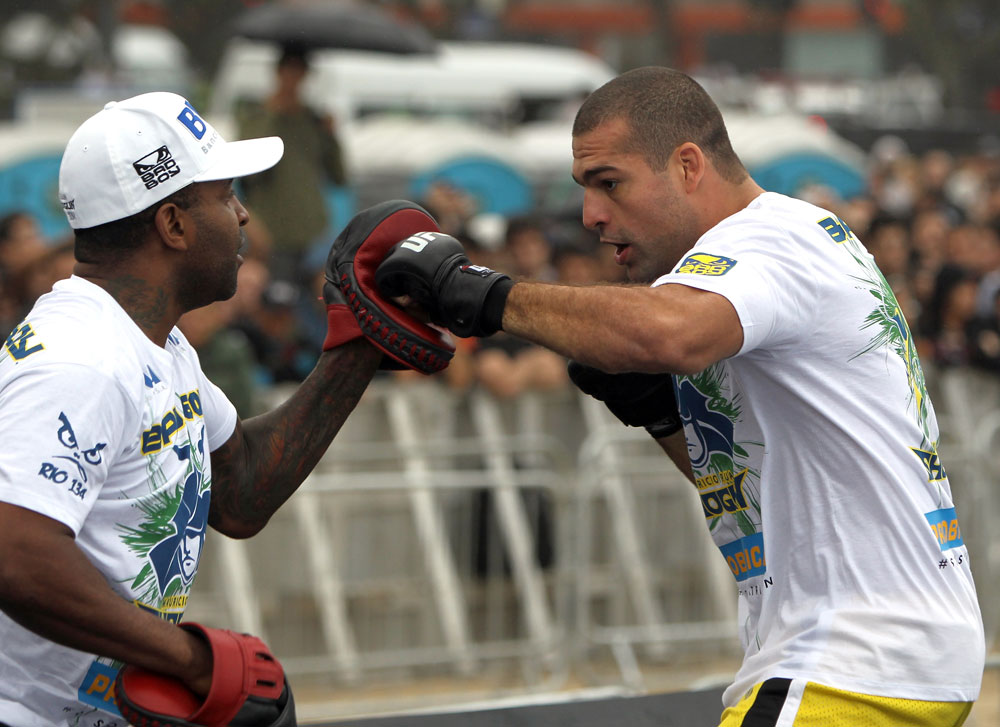 The last time Mauricio Rua fought in his home country of Brazil, things were a lot different than they will be on Saturday night, when he performs before thousands at the HSBC Arena against Forrest Griffin in the co-main event of UFC RIO.

Back then, in August of 2003, the 21-year old Rua was just two fights into his mixed martial arts career, years removed from his Grand Prix title in PRIDE and his light heavyweight championship in the UFC. He was a kid with potential – no more, no less. His opponent that night in the Meca World Vale Tudo 9 event in Rio De Janeiro was the local hotshot – Evangelista “Cyborg” Santos.

“I remember it perfectly, as it was a very exciting and hard fight,” said Rua through manager / translator Eduardo Alonso. “Back then, Cyborg was tough and very feared; he was beating everyone and I was still very young, so people didn't give me much of a chance.”

But Rua showed the heart, power, and talent that would soon become his hallmarks that night, as he stopped Santos at the 8:12 mark of the bout to move to 3-0 as a pro.

“That fight was a war and I got my brown belt in BJJ after that fight,” he recalled. “It was a very important win on my record back then.”

Next stop, the world.

Eight years later, when the discussion turns to the best 205-pounders on the planet, Rua’s name is always prominently mentioned, and rightfully so. But despite still being a few months removed from his 30th birthday, he is being greeted with questions about his future following the loss of his UFC title to Jon Jones in March of this year. The loss, a third round TKO, sent shockwaves through the Curitiba native’s devoted fanbase, and it hit the fighter just as hard.

“It was a very sad defeat, and it really made me think a lot,” said Rua. “However, you have to put things behind you and work hard to achieve your goals, so as soon as I started to train again it was in the past.”

That’s the key to success in anything. Dwelling on your losses and setbacks will only keep you chained to them. Rua has only tasted the bitterness of defeat five times in his nearly nine year career, and each time he has been able to shake off the disappointment and move on. He’s never lost two in a row, and he doesn’t intend on starting that habit now.

But this comeback fight is different, mainly because the man he’s facing – Griffin – is the one who shot an arrow through Rua’s aura of invincibility back in September of 2007.

Before that fight, Rua had lost a 2003 bout to Renato Sobral, one which you could write off due to inexperience, and a 2006 PRIDE bout to Mark Coleman which ended due to a freak injury. So when he made his move to the UFC, he did so as an unstoppable force whose greatest accomplishment to date was the 2005 Grand Prix tournament win that saw him defeat Quinton Jackson, Rogerio Nogueira, Alistair Overeem, and Ricardo Arona in succession. Griffin, while popular and a legit 205-pound contender, was not going to have a chance with “Shogun.”

Griffin didn’t get the memo, and with 15 seconds left in the bout, he submitted Rua via rear naked choke. Rua was crushed.

“It was very sad,” he said, when asked about the morning after the UFC 76 defeat. “It was a tough phase of my life with many changes being done, and others on the way, and losing is always sad. But things come for a reason so you have to learn from your experiences.”

Was he as shocked with the result as the rest of the world was?

“I'm a very confident fighter, and I always do my best and believe in my chances,” said Rua. “Obviously I entered the fight thinking I would win, but I wasn't shocked at all, because I knew he was tough and when you enter a fight it's either winning or losing.”

Saddled with a series of knee surgeries in the ensuing years that came before and after wins over Coleman and Chuck Liddell and a controversial decision loss to Lyoto Machida, Rua carried on with his career and eventually won the 205-pound title in the rematch with Machida in 2010. But did he ever think of a rematch with the man who handed him his first UFC loss?

“As a fighter you always want to fight again against guys you lost to, because you know you could have done better,” he said. “But I try to always think about my next fight only, and let things happen naturally, so even though I always wanted it, I wasn't really pushing for it.”

But now it’s here, and it couldn’t have come at a better time, as Rua is undergoing a fistic rebirth of sorts, not only returning to fight at home in Brazil, but doing so with his original Chute Boxe trainer, Rafael Cordeiro, by his side.

“Master Rafael is a great coach and knows my game very well, as he was the guy that I started out with in fighting who has taught me everything from white to black belt,” said Rua. “He knows how to bring out the best out of me as a fighter, so it has been very good. He has knowledge about my game, my style and how I fight the best, and he also knows how to build a lot of confidence in fighters.”

“I had been in touch with him often for a long time, as we were always friends and I always respected him,” continued Rua. “Unfortunately he was living in the U.S. and I was living in Brazil, so it wasn't that easy to train together, but for this fight I made the effort to live abroad for a while and focus only on my profession, so I could train with him.”

If it sounds like everything has turned around for Rua in a positive way since the Jones fight, that would be accurate. In fact, the only bad news over the last few months was when another Cordeiro student - and Rua’s friend – Wanderlei Silva, lost via crushing knockout to Chris Leben at UFC 132 in July.

“It was very difficult,” said Rua of Silva’s loss. “Wanderlei is not only a great fighter, but also a friend and our hero. He was my biggest source of inspiration when I was starting out, along with my brother Ninja. But when you fight you can win or lose, and it only happens to those who fight. Now it's time for him to work hard and I'm sure he can comeback with a win.”

That’s precisely what Rua plans on doing this Saturday night in Rio. In many ways, this fight can be symbolic of a new beginning for him, as he gets a chance to restart his UFC career against the man who originally spoiled his debut. But he won’t go as far as to put such pressure on himself. There will be enough of that coming from Griffin.

“I try to not think about those things,” he said. “It may seem to be or mean a lot of things, but I only think of it as one more fight against a very tough fighter, and winning is always the only way to move up.”

Sometimes the simplest approach is the best one, and it’s the way “Shogun” Rua found his greatest success. That success began in Rio eight years ago, and now he’s come full circle.

“It's a very special moment and I'm very happy to be fighting in front of my hometown fans, my family and my friends,” he notes. “But when you are inside the Octagon it's always the same - a fight against a tough guy - so you have to block all that out and just focus on the job ahead.”