"I don't mind hype. As long as I perform to it and live up to it then I
deserve it. Today that's okay. But once you stop performing to that
level or the attention of that level then that's when you start to
drown.” - Matt Mitrione 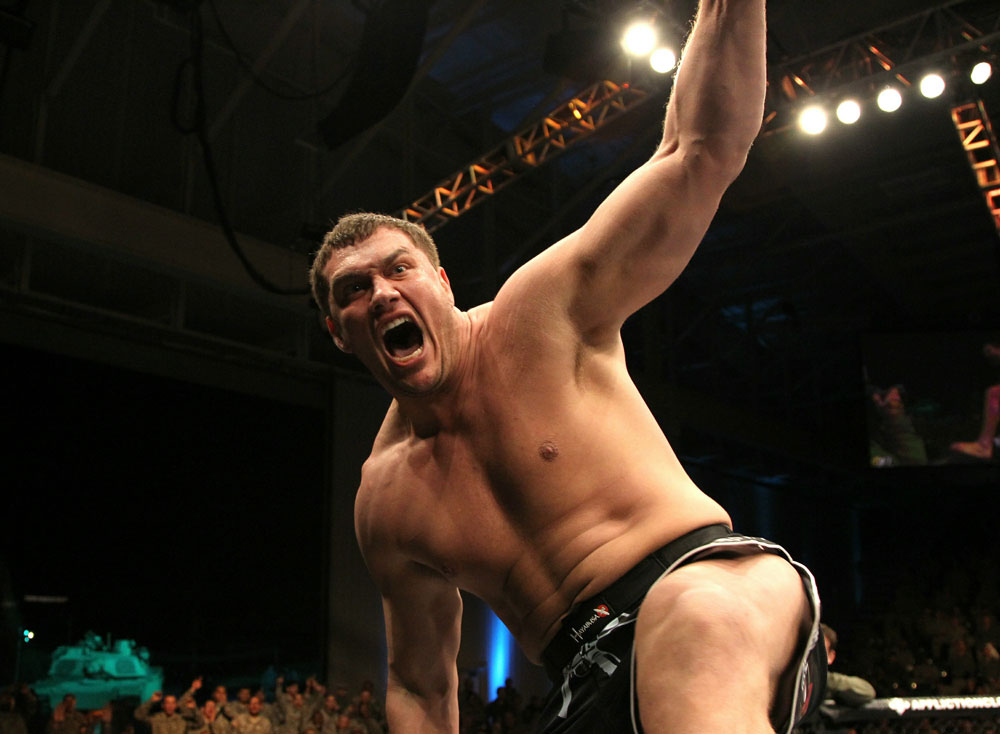 The following is shameless hype about Matt Mitrione. This is an unabashed article hyping up the fastest rising name of the UFC heavyweight division that’s not Junior dos Santos. The hype machine is revving at full throttle as the undefeated prospect is set to do battle in the Octagon for the fifth time at UFC Live on June 26th in Pittsburgh, PA. To a lesser extent, the hype will also include his opponent, the 6’6” and 260 plus pounds Christian Morecraft, arguably Mitrione’s toughest test to date.

And the first person who would ask “why is there all this hype” would be Mitrione.

“I really am quite possibly the most over hyped fighter in the UFC to date,” says Mitrione. “Especially at heavyweight. I have so much attention around me and I don't know what it's from. I don't know if it's because I've won a couple of fights and I've improved in each one. Is it The Ultimate Fighter or beating Kimbo Slice? I don't know what it is.”

The answer is simply: all of the above. While appearing on the tenth season of TUF, the 32 year old former NFL defensive tackle was one of the most memorable fighters in the house for good and bad reasons. Mitrione more or less feigned mental illness, almost came to blows with teammate Jon Madsen, and put on one of the better fights that season in the standup duel with Scott Junk. Since TUF, he has won 3 fights by knockout and scored a unanimous decision victory over Joey Beltran that was awarded “Fight of the Night”.

In short, he has quickly become a UFC star because of three reasons. First, the heavyweight division generally garners more attention than the other weight classes. Second, he has a fan friendly fighting style of trading fists and feet until he gets the knockout. Third, Mitrione comes across as a likable, genuine and funny guy in his interviews and on his active Twitter account. The question is, what does Mitrione do with all this unexpected press?

“It's motivation,” explains Mitrione. “It's ‘you have to go out there and earn this attention, boy.’ You have to go out there and earn your money and go out and chase your nickel down. I'm excited to do that. It's fun to me. I don't mind hype. As long as I perform to it and live up to it then I deserve it. Today that's okay. But once you stop performing to that level or the attention of that level then that's when you start to drown.”

The Purdue University alum’s next challenger to prove himself against is the 7-1 Morecraft. “I think he's pretty convinced he's pretty strong and I think he's pretty convinced he's pretty good,” said Mitrione, who believes his young opponent may be buying his own hype after the guillotine choke win over Mitrione’s friend and training partner Sean McCorkle in March. “I think the fun part of the fight is when my fists start touching his chin or once my shin starts to touch him and we’ll see how he reacts: if he becomes aggressive or he shells up. If he becomes aggressive then he is going to rush me and try to put his hands on me and that's cool because he's going to be headbutting my fist or shin. If he shells up then that means I'm going to tee off on him.”

In preparation for this bout, Mitrione has added a new weapon to his arsenal: catch-wrestling. For the past six weeks, Mitrione has been working at Xtreme Couture in Las Vegas, NV with Randy Couture’s revered coach Neil Melanson. The idea to do this started after a workout with Couture during a visit of his to Mitrione’s hometown of Indianapolis. It was then that “The Natural” made an observation about Mitrione’s ground game that planted the seed for this to come to fruition.

“We worked with each other in Indy one day, he made a point that I wasn't trying to get back to my feet as he thought I would," tells Mitrione. "I would go for submissions, but I wasn't trying to get to my feet enough. It started to resonate with me a little bit. I have never wrestled a day in my life. I train a lot of jiu-jitsu, so if I get taken down I can be in better shape and protect myself. I got too comfortable working jiu-jitsu and wasn't trying to get back to my feet at all. I went back and watched my fights and the only rounds I've lost are ones when I was on my back. Even though I was being offensive off my back going for triangles or armbars or sweeps, I'm still losing. So, I turned my attention towards wrestling and started looking at what Randy does: catch-wrestling.”

Despite the focus on his ground habits, Mitrione has sharpened his striking skills. Throwing hands comes naturally to the 6’3” heavyweight, but he has had several renowned coaches help him in the process. A lot of credit for tailoring Mitrione’s standup style goes to Duke Roufus from the time the two spent together before Mitrione’s first couple UFC fights. Then he keeps his standup crisp with the help of friend and UFC welterweight Chris Lytle when he is at home in Indiana. And recently, Mitrione has been working with Ray “Sugarfoot” Sefo at Xtreme Couture as well as sparring with McCorkle and Miguel Torres' prospect Anthony Gomez.

On top of his striking acumen, Mitrione’s greatest attribute while standing is his almost unseemly reach advantage.

“I live off of my reach. I know that my striking range is 4 or 5 inches farther than everyone else's for the most part. I capitalize on that. I make sure that I can touch your chin, but it's going to be a real stretch for you to get mine. I make sure even if you do get my chin you're going to put yourself out of position. There are times when depending on who I'm working with where I'm willing to eat one of yours to drop off two or three of mine. Usually, that has paid off for me.”

On June 26th at the Consol Energy Center in Pittsburgh, Mitrione and Morecraft will collide in the Octagon to see what truth there is to all this hype. “I feel like I know as a professional athlete what it takes to prepare and what it takes to win,” asserts Mitrione, who will look to batter his foe with superior striking speed and power on his way to his fifth “W” in the cage. “I try to live it and I try to make sure it happens. As a result, if I get attention that's cool, but as long as I win and win the way I want to, then everything is gravy.”

And as long as he keeps winning in the UFC, Mitrione is making the hype the reality, and there is no shame in that.