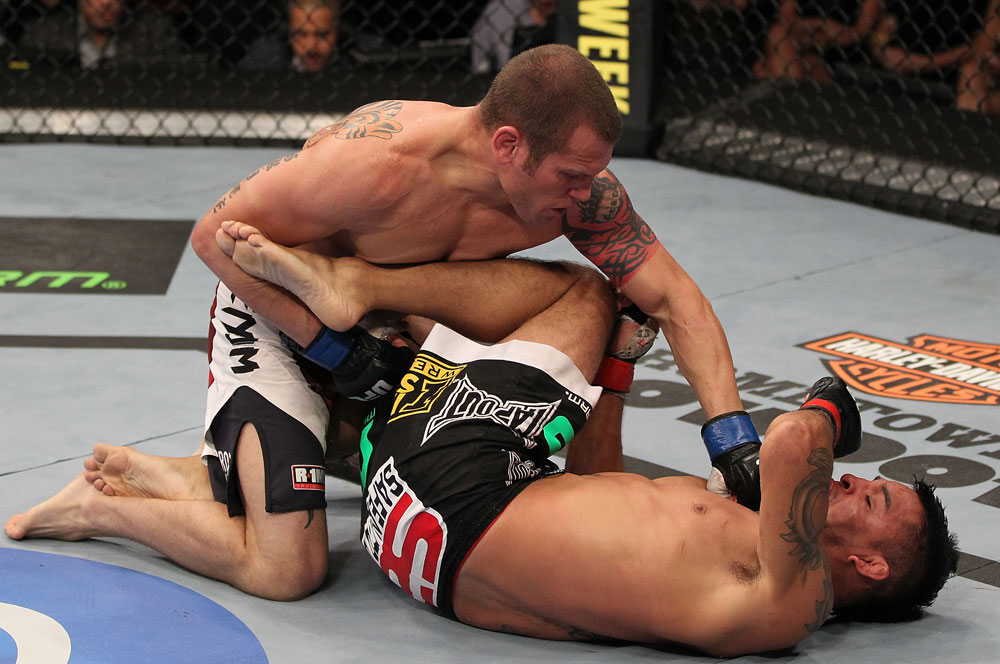 Fight fans may remember Oklahoma City area native Matt Grice’s first UFC stint from 2007 to 2009, where “The Real One” went 1-3 as a lightweight with its highlight being the Fight of the Night win against Jason Black at UFC 77. After going 4-0 in regional shows, Grice returned to the Octagon in June 2011 a few pounds lighter as a featherweight in a loss to top contender Ricardo Lamas. But a year later at UFC on FX 3, he got back on the winning track and ran the tables on Leonard Garcia in an impressive unanimous decision win.

The difference between the former lightweight Grice and the current featherweight Grice is as much physical as it is mental, and it’s as much about the changes inside the cage as the ones outside of it. Obviously, the drop in weight class means he has turned from a smaller lightweight to a bigger featherweight, but more importantly it has changed Grice’s diet for the better and put added emphasis on his physical development.

“I feel incredible,” states Grice. “It’s the best I've ever felt. '55 wasn't hard for me to make. I was a small '55 pounder. But at '45, I have a nutritionist. It's kind of changed my outlook on everything. I'm healthier than I've ever been, I'm in better shape than I've ever been. It's definitely been the best thing for my career for sure. It’s all advantages for me. I don't feel like I've lost anything, no strength. I don't cut all my weight at the end. I diet down, and the diet I'm on gradually allows my weight to go down, but it also allows me to pack weight back on for the fight the next day. For the last fight, I felt incredible, and I'm already in better shape than I was for the last fight. I'm ready to go. I can't wait.”

Besides adding a nutritionist to the payroll, the 31-year-old with a Bachelor’s degree in sociology and NCAA Division I wrestling experience from the University of Oklahoma became a small business owner in January 2012 by opening his own gym, R-1 MMA Training Center, in OKC. It’s given Grice a home base to train with an influx of local talent, which means a never ending stream of sparring partners. Between moving to his proper division and having a state-of-the-art gym to call his own, he is taking the correct steps to making himself a more professional fighter before he steps into the Octagon, and a more dangerous opponent when he enters it.

“Pretty much all the top fighters from around Oklahoma City train here,” tells Grice. “It's pretty a much a little Mecca for all the small guys from 170 to 135. We've got 20 or so guys that are tough as nails. It makes a world of difference having them. There are a lot of different aspects and different looks. Before in Oklahoma City, some fighters would train over here and some fighters would train over there and it was spread out. Now that we've opened our gym, it's like all the toughest guys have all migrated together. If you want to be somebody then you've got to learn from everybody and I think we do a good job of that.”

Another big difference between the 15-4, married father of two’s first time in the UFC and now is Grice’s ability to balance work and “play”. For him, work is as an Oklahoma City police officer and “play” is trading fists and feet inside the Octagon. In 2007, Grice took a leave of absence for two years to go through the police academy, and he fully admits he wasn’t training properly during that time to immediately jump back into the UFC’s deep waters like he did. But now he has the financial security that his family needs as well as the competitive outlet a four-time Oklahoma State wrestling champion needs.

“I think it definitely makes me more focused,” explains Grice. “Before when I was just fighting, I had too much time on my hands. Even on my 10 hour days, I'll get in two workouts. I like to stay busy. I think it helps me stay grounded and stay focused. It also helps take pressure off of me. No matter what, I'm always in shape, but fighting isn't the end all for me. I have two little girls, I have a wife, and, no matter what, I have a job where I can provide for my family. The fighting is a bonus. I do it because I love to do it; I don't do it because I have to do it. I could quit fighting tomorrow and I would be financially okay. But I do it because I enjoy it and I love it. I love to compete, I love to test myself, and that's why I fight. To me, I think that's an advantage because I don't have to be there, I want to be there.”

As far as the results, Grice earned 30-27 scorecards across the board against Garcia in June. It was a display of wrestling dominance from “The Real One,” with four of seven successful takedown attempts and eight guard passes. For the most part, Grice took away Garcia’s ability to generate any offense for 15 minutes as the “Bad Boy” landed only two significant strikes in three rounds. Also, the win showed off Grice’s solid gas tank with his unrelenting pressure, which had him in Garcia’s face from opening to closing bell.

“I just knew that if I wanted to win, I would have to put it into my world and just control every aspect of the fight,” asserts Grice. “I knew that in pre-fight he was saying if I was going to take him down then he was going to submit me and this and that. I was like, 'We'll see about that.' I knew that his best chance to win the fight was obviously on the feet and I wanted to take his best chance away and put it into my world. For me to control the pace of the fight and dominate the fight, I knew I could do that on top of him.”

While the W was a decision, 10 of Grice’s wins are stoppages, with by far the majority of those via powerful punches. “All my coaches and all my sparring partners have said I have heavy hands,” says Grice ,who fits in nicely with the rest of the UFC’s high level wrestlers who like to throw haymakers and hammerfists as much as shoot for singles and doubles. “Most wrestlers are powerful guys, and once they learned the technique to punch they usually punch pretty hard. It's kind of a natural progression to go from wrestling to control and once you've controlled somebody then you start laying on heavy ground and pound. On the feet, you always have to cut angles to take someone down and that's the same way for striking - you have to cut angles to hit somebody.”

Up next is an explosive collision at UFC 157 in Anaheim, California with The Ultimate Fighter 14 finalist Dennis Bermudez. With an overall record of 10-3, Bermudez has scored back-to-back victories in the UFC in different but equally dominating fashions. The former NCAA Division I wrestler from Bloomsburg University of Pennsylvania is known for a fast and furious fighting style that has helped to earn “The Menace” two Submission of the Night (one on TUF 14) and one Fight of the Night bonus within his first year with the UFC. On paper, fight fans should expect to see two rams butting heads inside the Octagon.

“Dennis is a very tough opponent,” admits Grice. “Pretty well-rounded. He's an ex-wrestler, very powerful, explosive. I don't think he's fought another wrestler like me. Most of the guys he's fought have been good in jiu-jitsu or striking, but not really another wrestler. I'm kind of anxious to see how that is going to play out. He's super tough, he's got good cardio, and he seems very strong. I just can't wait. I think it's going to make for a great exciting fight. Neither one of us likes to back down and I think that will make for some fireworks.”

As mentioned, “The Real One” is busy training for the Bermudez bout at his own gym, R-1 MMA. One of Grice’s main training partners is UFC welterweight James Head, who is getting himself prepared for his April scrap against Nick Catone. Helping couple submission grappling to Grice’s stellar wrestling is Travis Serna, who is a BJJ black belt under Rafael Lovato Jr. More than anything, this refocused Grice just wants to fight, he’s hungry for a fight, and believes he’s ready to take on the best the UFC has to offer.

“I'm the best fighter I've ever been and I'm in the best shape I've ever been,” declares Grice. “I always thought I was well-rounded before, but I'm even more well-rounded now. I'm someone who for 15 minutes, no matter where the fight goes, I’ll be fighting. My goal is to win. Whether that is us standing toe-to-toe for 15 minutes or 15 seconds or me having to take him down - I don't care what happens during those 15 minutes as long as my hand gets raised. That's what matters to me. I'm ready to make a run and have some success at 145 pounds.

This Saturday, Grice is ready for his second shot at making a great impression on UFC fans by taking out Bermudez. “I think with the guys I train with and the skill sets I'm developing, I think I have all the abilities to be one of the top guys of this division and on February 23rd I'm going to prove that,” affirms Grice, who believes he’s made the necessary changes in and out of the cage to start stacking Ws at featherweight. “Dennis has a little hype under him from winning his last two fights and being in the finale of the Ultimate Fighter, and he's exciting to watch, but I think I'm better in every aspect and I can't wait to prove that on the 23rd.”