The Many Motivations of Brad Pickett

"I’m down here for a reason, and I’m very focused on that reason. My
focus is trying to beat McCall. Beat McCall, then (UFC flyweight
champion) Demetrious Johnson. That’s my goal." - Brad Pickett 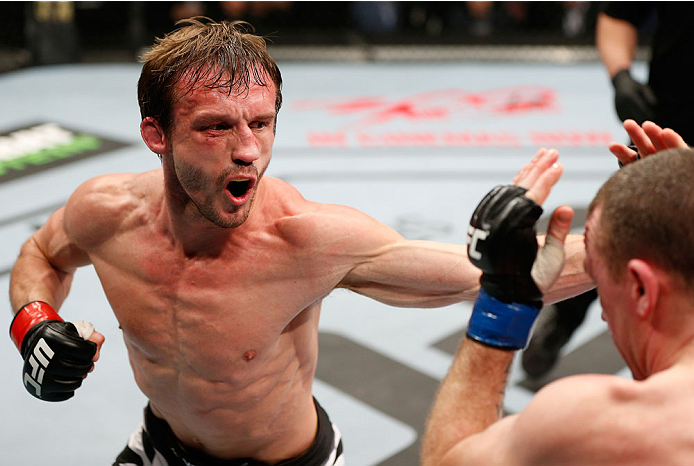 Motivation is never in short supply for a UFC fighter. First off, there’s the reality that if you win, you double your purse, and that’s enough right there. But there are other things that drive an athlete to sacrifice and cut weight in order to step inside the Octagon and perform. For flyweight contender Brad Pickett, there are several reasons why he fights.

“The main motivation for me is to be number one in the world, but you always get other motivations,” he said. “I got married last year and I know that I’m not going to be in the sport for years to come, so I want to try and achieve as much as I can now to set myself up for my future and the kids which I don’t have yet because I’ve sacrificed everything for this sport.”

Those are admirable reasons, but heading into his Saturday bout with fellow 125-pound standout Ian McCall in Dublin, it doesn’t hurt to have a little more incentive.

“You get extra help with motivation from someone like McCall, who you really want to punch in the face,” said Pickett. “That adds fuel to the fire for me. I don’t there’s been anyone I’ve ever fought that I wanted to punch as much as him.”

That’s not shocking, given the back and forth banter between the two before and since their March fight was postponed due to a McCall injury, but what is surprising is that the affable Pickett has gotten into a trash talk war to begin with.

“I’m mentally tough and I don’t need trash talk to motivate myself,” he said. “I fight how I fight and I have a lot of respect for every opponent I ever had because what we do is very hard. I appreciate anyone who does our sport, but McCall, with his antics and the way he looks past me as if I’m nobody, I just think it’s very disrespectful. I fight hard anyway, but I’ll get extra pleasure out of beating the crap out of him.”

That desire to send a painful message to “Uncle Creepy” may end up being the greatest motivation for Pickett to make the laborious cut to 125 pounds, a process which he readily admits isn’t the easiest one, especially after fighting the previous four years of his career at bantamweight. But after falling short of getting a title shot at 135 pounds, he decided his best chance at striking UFC gold is at flyweight, where he debuted in March with a win over Neil Seery.

“It’s hard to make this weight class for me,” said Pickett. “I have to make lifestyle changes, and it’s not easy. The only reason I’m at this weight class is that I want to try and be number one in the world and get a title shot. My doors were shut at bantamweight. I had a few opportunities where I was in title eliminator fights and I ended up getting beat, so for me as an athlete, I’m always striving to be the best, and as that door got shut for me at ’35, and I felt that I wasn’t the biggest 135-pounder, I thought I could make 125. And if I never even attempted it, I would have always looked back on my career and thought woulda, coulda, shoulda, and I didn’t want to be that person. I wanted to go down there and try. And if the door for a title shot shuts down for me in this weight class, I’ll go back up to ’35 and I’ll put on exciting fights. But I’m down here for a reason, and I’m very focused on that reason. My focus is trying to beat McCall. Beat McCall, then (UFC flyweight champion) Demetrious Johnson. That’s my goal.”

Pickett won’t say it, instead declaring that he “wasn’t satisfied” with his performance, but he did look good in going three hard rounds while beating Seery earlier this year. But what London’s “One Punch” will say is that this time around, he’s figured out the cut to 125 a lot better.

“I was dieting for way too long (for the Seery fight),” he said. “This time I didn’t do it that way. I stayed a bit heavier and now I’m in the same position I was for my last fight, but I trained a little bit bigger and it was a lot more enjoyable. In the sport, timing is very important. Not just in the fight, but in your training camp - learning when to peak, when to be in good shape, and when to have things come together. Last time, I peaked too early and I was in great shape for too long. And when you do that, you sustain more injuries, you over train, and for this camp it’s been perfect for me.”

So perfect that he can’t wait to test his fists out on McCall’s chin. But at the same time, despite his disdain for his foe, he won’t get too emotional – or emotional at all – when the bell rings.

“I love fighting and I stay very calm,” he said. “I don’t get too emotional and I’m never scared of my opponents. I don’t worry about getting hurt or knocked out, and what I feel is that everyone I fight is worried about getting hit by me. Even if that’s not the case, I always think it. When you fight me, you’re not getting an easy fight, win or lose. You’re gonna be in a fight, and some people don’t like that. I like being in a war. It’s terrible for my coaches sometimes, but I don’t care about bleeding, and I like that kind of environment where you’re trying to break someone mentally. If you’re trying to put me away and I keep coming at you like a zombie, it breaks people mentally, and to me, that’s one of the best satisfactions in fighting.”