"My style is what brought me to where I am today; it is what made me a champion." - Lyoto Machida 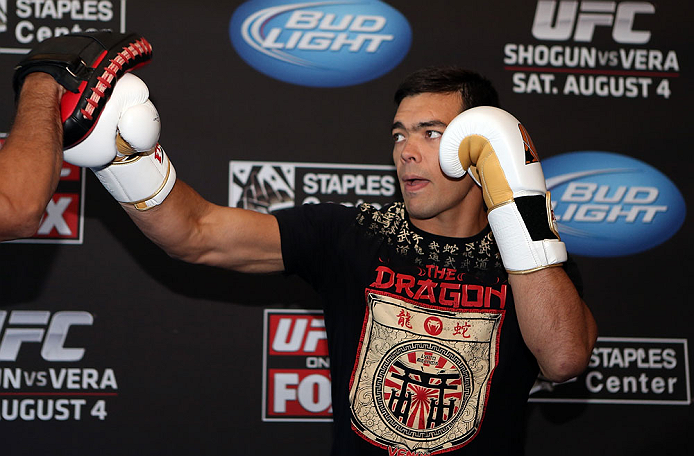 For over six years and 15 fights, no one could figure out Lyoto Machida. Not Rashad Evans, BJ Penn, Rich Franklin, or Tito Ortiz. Fighting in the karate-based style created by his father Yoshizo, “The Dragon” provided many sleepless nights for opponents hoping – and praying – for some little crack in the code that they could decipher in this most unorthodox of mixed martial artists.

But then fellow Brazilian Mauricio “Shogun” Rua extended the then-UFC light heavyweight champion five rounds before losing a controversial decision in October of 2009. Seven months later, Rua issued Machida his first pro defeat via first round knockout. Quinton “Rampage” Jackson and Jon Jones would also pin losses on his record, sandwiched around a win over Randy Couture in April of last year.

At this point, many fighters would sit down and wonder whether everything that had happened before was just a mirage. They would dismantle their fighting style and come up with something different, but not nearly as effective. In essence, they would change who they were in response to adversity. Lyoto Machida refused such a course of action.

“My style is what brought me to where I am today; it is what made me a champion,” said Machida through translator Derek Kronig Lee. “I have adapted a lot of things and changed up, but my style remains the same.”

That statement is a welcome one to the legion of fans who have stuck by Machida’s side throughout his struggles. In fact, it’s that loyalty that motivated the Salvador native to stay the course and adapt, but not drastically alter, what got him to the top in the first place.

“I think we learn a lot from losses and I have learned a lot as a man and as a fighter in the last years,” said Machida, making sure to add that “It's great to have so many fans who have been following my career for so long. I feel that no matter what happens the fans are always there to support me and recognize my work.”

That work still remains among the best in the UFC’s light heavyweight division, regardless of what the win-loss record might reflect. In his last four fights, the bottom line may read 1-3, but with the exception of the knockout loss to Rua in their 2010 rematch, he was in each of the fights he lost, arguably beating Jackson, and he delivered one of the biggest knockouts of last year against Couture. So after testing Jones in their championship fight last December, Machida should have had enough confidence that he was still a world title contender and among the best 205ers in the sport. And he did. But first, it was time to settle down for a bit and reflect.

“When you are not on top you have a chance to look up and see where you can improve both as an athlete and as a man,” said Machida, who relocated with his family to Los Angeles since the Jones bout. “I had a chance to relax for a while and refocus in my time off, but now I want to get back in a fighting rhythm.”

On Saturday, Machida’s eight month break is over, as he returns to face Ryan Bader in the co-main event of the UFC on FOX card.

“He is a very athletic fighter and a good wrestler. I think he mixes his wrestling with his boxing well,” said Machida of the former Arizona State University wrestler. Given that this is Machida’s first bout at LA’s STAPLES Center since his initial meeting with Rua, it’s almost symbolic that fighting in the venue where many believe he began his slide could spark a rebirth should he score a big win. That’s the romantic notion. The reality is that if he finishes Bader in impressive fashion, he could secure a rematch with Jones, if the champ emerges from his September 1st showdown against Dan Henderson with the belt intact. But that’s not Machida’s first priority.

“I am not focused on challenging for the title yet,” he said. “I need to get through this fight and assess my position in the division. I trust the UFC's decision making process and will see where I stand in the division after this victory.”

Did he see some cracks in the armor of a champion that has looked as invincible as Machida once did?

“I believe there are always some points that can be explored, but now I am working to get back in the mix and improve myself first.”

It’s the response you expect from Machida, never a trash talker, never one to make bold statements that end up as bulletin board material for opponents. That’s earned him praise from his peers, who, despite the recent 1-3 stint, still have a high dose of respect for the style the Brazilian brings to the Octagon.

“I believe in respecting your opponents and have always carried myself that way,” he explains. “That is part of martial arts' philosophy, so I also appreciate being respected in and out of the cage.”

Wins and losses may come and go and styles may be broken down and figured out, but that kind of respect is forever. And in Machida’s case, it’s well-deserved.