“One of the things I will proclaim, and pretty boldly, is that I think I
have some of the best wrestling for MMA out of anybody." - Charlie Brenneman 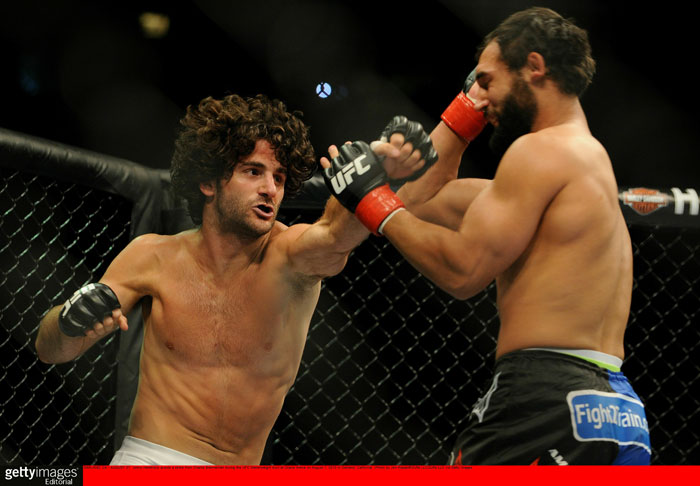 Ed. Note - Following the withdrawal of TJ Grant and then Nate Marquardt, Brenneman will now face Rick Story at UFC Live on Sunday.

Fear the hair. The most famous follicles in the UFC may belong to the whirling, early Metallica-esque locks of lightweight Clay Guida. But there is a 13-2 mane at welterweight that is making headlines after its dominating unanimous decision win over Brazil’s Amilcar Alves in January. The man who commands that head of hair is Pennsylvania’s own Charlie “The Spaniard” Brenneman.

Sadly, “The War of the Wool” between Guida and Brenneman will most likely not take place because they are in separate weight classes. That will not save fellow 170 pounder TJ Grant from Brenneman’s curls or his takedowns as the two will clash at UFC Live in Pittsburgh, on June 26th.

The pride of Hollidaysburg, put on a wrestling clinic in his last Octagon outing at UFC Fight for the Troops 2 against submission specialist Alves. “It pretty much went exactly how I had planned for it to go,” says Brenneman, who scored takedowns almost at will for all three rounds and limited most of Alves’ offense to elbows from the bottom. “I was able to dominate him with my wrestling and positioning. With that being said, I would have liked to have opened up more. I respected his ground game a good bit and that kept me a little more cautious than I would have preferred, but at the end of the day I was happy with the performance.”

The former Lock Haven University wrestler kept relentless pressure on his opponent and even escalated his attack as the fight drew on. “I definitely did push the pace at the end, as I could feel him getting tired,” he explains, and he dealt most of his damage in the final minutes of the third round, clearly showing that he was the fresher fighter. “I know that those last three minutes of the fight I'm going to be just as strong as the first. That was part of the gameplan, and part of my personal mission. Had I pushed the pace earlier maybe I could have gotten the finish, but I really didn't start to feel him fade until late in the third round.”

The person the least bit surprised in his ability to manhandle a judo black belt like Alves for 15 minutes is Brenneman himself. “One of the things I will proclaim, and pretty boldly, is that I think I have some of the best wrestling for MMA out of anybody,” asserts “The Spaniard”, which is a big claim considering how many fantastic wrestlers there are in the UFC. “Whether they were a national champ or whether they're weren't. Straight wrestling is one thing, but wrestling for fighting is a completely different thing. Fortunately for me, one, I have been naturally pretty good at it, and two, I have worked really hard on putting the punches, kicks and takedowns all together.”

Brenneman believes his success lies in his ability to combine facets from his old sport, wrestling, into his new one: MMA. “The important thing is to have the attributes of wrestling and transfer them over to fighting like scrambling,” he said, clarifying that some of these attributes are unteachable and come from a fighter’s heart. “Having good hips helps with scrambling. But one of the biggest things from wrestling is endurance. Being able to push the pace is something wrestlers are ingrained with from the time when we're six, seven, eight years old, and it's just a mindset and we can carry that mindset over.”

The 30 year old is now 2-1 in the UFC and running high on confidence as he aims to put his skills to the test against the Canadian Grant. With an overall record of 16-5, Grant has seesawed back and forth with wins and losses during his two years in the UFC. Generally, Grant is seen as a submission ace, with 12 of his 16 wins by sub, but the highlight of Grant’s time in the Octagon is a late first round “Knockout of the Night” over Kevin Burns at UFC 107.

“It's an extremely tough fight,” he says. “If you asked me where I think he is best at, I would say off his back. He's got a very slick submission game. He has plenty of submissions on his resume, but that being said he's also very dangerous in his standup. If you watch him in the Johny Hendricks fight, he is on point and looks great. He presents a danger in every area, but I truly feel that if I'm able to work my game then I don't think he's going to have an answer for it.”

Besides Brenneman’s usual level of excitement prior to a fight, he should be treated to a local hero’s welcome from the UFC faithful. “I'm the only guy from Pennsylvania on the card, so I'm hoping by default I'll be their favorite fighter,” remarks Brenneman, who wasn’t originally scheduled to be on the card. Instead, he is stepping in for the injured Matt Riddle. “I was hoping every day to get onto this Pittsburgh card. Actually, the day I found out that I was on this card was the lowest day I've had mentally because I finally accepted that I would not be on that card. My manager called and said he thought he could get me on the card and I said ‘yes’ and afterward I was like ‘who am I fighting?’"

Even though the fight is on short notice, Brenneman trains full-time with the renowned AMA Fight Club of Whippany, NJ. “I take a day or two off a week, but I train like it’s my full-time job,” explains Brenneman, who was preparing himself with the UFC’s Miller brothers under the watchful eye of coach Mike Constantino as if he already had a bout scheduled. “I always keep myself ready like I'm 2-3 weeks out from competition. For a lot of people they look at this fight and say six weeks is short notice, but to me it's perfect. I was definitely getting ready and honing my skills, getting bigger, faster, stronger.”

On June 26th at UFC Live in front of the black and yellow wearing Pittsburgh fans, “The Spaniard” will look to use his superior wrestling to wear Grant out with constant pressure and his unfettered endurance. “I want the people in the crowd to leave there thinking win, lose, or draw that I'm one tough SOB,” affirms Brenneman, who is champing at the bit to put it all on the line for his homestate fans and hoping to make new ones in the process. “That's what I strive for, that's what I train for, that's what I fight for. I want people to respect me for what I do.”

In the end, don’t let the hair fool you, as there’s a fighter under there. You’ve been warned, Grant. Fear the hair.