Liz Carmouche: Ready for the Next Challenge

"I am constantly pushing myself. For me it’s always about getting better." - Liz Carmouche 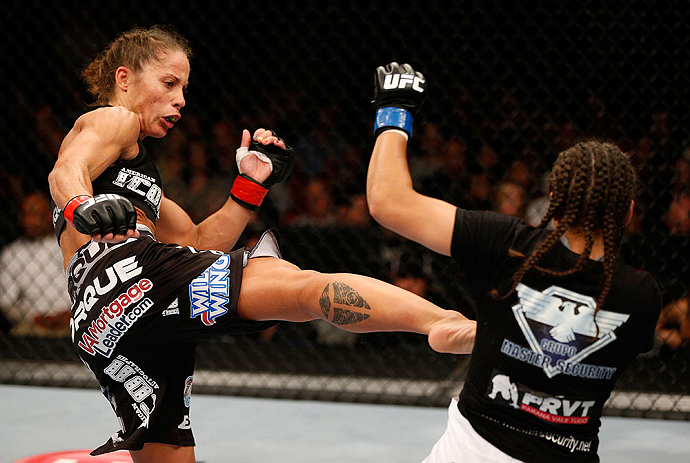 When female bantamweight Liz Carmouche faces perennial contender Miesha Tate at UFC on FOX 11 on April 19, the former Marine corporal will be entering the cage with a walkout song befitting her status as one of the toughest fighters in the division.

“‘Va Va Voom To The Moon’ by Fans Of Jimmy Century will be my walk out song," she said. "It inspires me with confidence."

With lyrics like, 'You might be the king of hustle but I'm the muscle, you can be the king of bling but I'm the ring,' it's easy to see why. But the seventh-ranked bantamweight in the world admits she is going to have her hands full against number three-ranked Tate.

“Miesha brings a lot to the table,” said Carmouche. “Everyone knows about her wrestling background and she’s a great grappler. But what makes her so good is she’s so scrappy. Just when you think she’s out of a fight is when she comes back and is most dangerous. It’s going to be a good fight.”

For Carmouche, a chance to regain a spot at the top of the contender’s list and a chance to avenge a loss against the champ Ronda Rousey is appealing, and a “W” over Tate is just the type of result that can do that for her. It is also a chance to fight a top name fighter after Tate had to withdraw from their last scheduled meeting last July to coach TUF opposite Rousey.

“I really wanted that first fight with Miesha but as long as it’s finally happening, and as long as I’m in the UFC I’m happy,” she said. “It’s been surreal for me. This whole experience of being the first women’s fight in the UFC, being profiled on FOX, meeting Dana White and all of the fighters, it’s been crazy to me and I’ve loved every moment of being a part of this.”

Indeed, as women’s mixed martial arts has reached the sport’s biggest stage, Carmouche finds herself in a unique position among elite fighters. But even as her popularity grows, Carmouche says her mother is still her role model, even as many UFC fans are looking to her for inspiration in their own lives.

“I have moments when I do embrace being a role model,” she says. “Especially when kids come up to me or someone will come up and tell me I’ve inspired them to make changes in their lives or get back to the gym. But on a day-to-day basis, I don’t really think about being a role model.”

Carmouche doesn’t hesitate to say Rousey is the true champion in her weight class. At 9-0, no one would dispute that claim, but for “Girlrilla,” she saw firsthand just how tough Rousey was when she escaped a tight neck crank during their historic matchup at UFC 157.

“I thought that I had her but I knew I wasn’t under her chin,” said Carmouche of the rear naked choke she caught Rousey in during the first round of the fight. “But I thought I could crank her neck, maybe break some teeth or her jaw, and I thought I had a tap no matter what. She is the true champion and I think in general, women are underestimated as far as their pain tolerance goes. I’ve seen many women’s fights where you can tell the submission is in tight and still the woman fights out of it and escapes. The heart of women is there. Their ability to push through pain is remarkable. I’ve cranked many necks like that and everybody taps.”

Carmouche would tap to Rousey’s signature armbar with just eleven seconds left in that round in what was one of the toughest tests for the champion.

Against Tate, Carmouche may have more of an opportunity to showcase her stand-up skills than with most opponents. As she herself stated, Tate is resilient and doesn’t hesitate to stand in the pocket and go blow for blow against her opponents, which could play right into Carmouche’s own style.

Just don’t suggest that this is an ideal matchup for her.

“I don’t have an ideal fight,” she says. “The ideal fight is just to win. It doesn’t matter if it’s on the feet or on the ground, if it’s quick or if it goes to the decision, as long as I’m the victor, that is the ideal fight for me.”

Carmouche is coming off a loss against the always game Alexis Davis, but she’s not one to look backwards or even lament a loss. Instead, she marvels at how far women’s MMA has come in such a short amount of time.

“It’s been amazing to see where it’s come and to see the potential of where it will go,” she said. “To see it start with just one weight division that was in doubt to now having a 115-pound division in the UFC, it’s only a matter of time before it grows into a bigger enterprise in a short amount of time.”

Carmouche, the first openly gay fighter in the UFC, was just twenty when she joined the Marines. She did three tours in Iraq of six months apiece. Suffice to say, training full-time in sunny San Diego and fighting for the second time on FOX, while even in a sport as demanding as mixed martial arts, “Girlrilla” has endured tougher times.

“I am constantly pushing myself,” she said. “For me it’s always about getting better. Whether that means being a better fighter, a better daughter, girlfriend or a person, it doesn’t matter. I am constantly seeking ways to challenge myself, and Miesha Tate is my next challenge.”