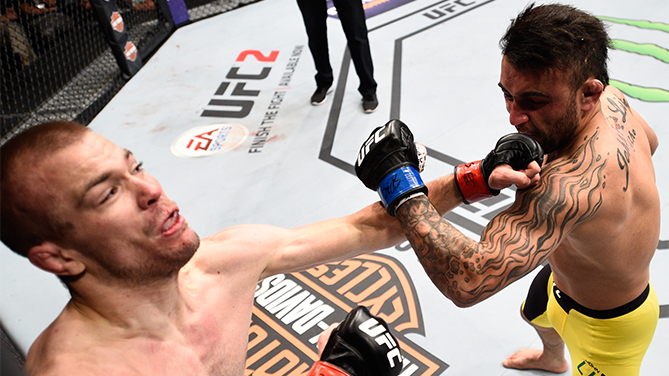 The first law of fighting in the UFC’s bantamweight division is that you don’t slug with Brazilian banger John Lineker. Michael McDonald found that out the hard way Wednesday in Sioux Falls, South Dakota, as he was knocked out in the first round by Lineker in their UFC Fight Night main event at the Denny Sanford Premier Center.

“I came here to please the crowd and I think I managed to do it,” Lineker said.

The taller McDonald used his reach well in the early going, but his rushes to exchange with the heavy-handed Lineker were a bad omen of things to come. With a little over three minutes to go in the opening round, the Brazilian struck with a right hand that dropped McDonald. “Mayday” rushed to his feet and was met with a series of uppercuts before getting sent to the deck again. Modesto’s McDonald rose once more and fell once more, but every time he got up, he kept swinging, momentarily tagging Lineker with a flush right that his opponent walked through. That seemed to be enough for McDonald to get his legs back under him, but just past the midway point of the round, another flush left from Paranagua’s “Hands of Stone” dropped McDonald hard, and this time he wasn’t getting up, with the follow-up barrage bringing in Herb Dean to stop the fight at the 2:43 mark of round one.

So what’s next for Lineker? He knows a guy.