Kaufman looks for win to get back in title hunt 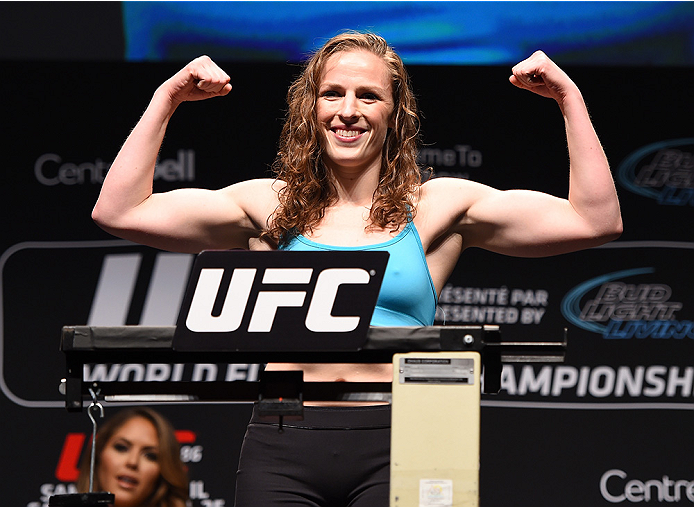 When Holly Holm removed the UFC women’s bantamweight crown from the head of Ronda Rousey on November 15, to say Sarah Kaufman was happy would probably be an understatement.

And it’s not just because Holm is a friend and training partner of Kaufman, but with the win scored by “The Preacher’s Daughter,” the careers of Kaufman and several members of the 135-pound weight class who had been defeated by the dominant Rousey got a jolt of new energy heading into the tail end of 2015.

More on Kaufman's next fight vs. Valentina Shevchenko

“Things have changed, and in a great way,” Kaufman said. “Having Holly get the big win really opened up the division and brought a lot of people, including myself, back into play. I think we were not really in play in terms of being ranked high but not likely getting a title shot anytime soon, based on the fact that you've already fought the champ and decisively lost to her, and it's hard to get that rematch. So now that Holly has the title, it's opened up a lot of things and put some life back into the division and it's gonna be crazy to see how people come out fighting now. I think the energy's going to be different.”

Ranked No. 5 in the division, Kaufman is obviously a highly-regarded contender, but after she lost her Strikeforce title to Rousey in 54 seconds back in 2012, the road to a rematch in the UFC was going to be a tough one to navigate. It also hasn’t helped that Kaufman has had an up-and-down existence since that bout, with injuries and spells of inactivity leading to a 2-1, 1 NC record that doesn’t truly represent how good the Victoria, British Columbia native really is.

“It was going to be a long, twisting, winding road to get there (to a title shot) and so I accepted that,” she said. “This is the UFC, they make the decisions, they're going to decide who I get, when I get it. I'll try to get on social media, I'll try to do what I can to get fights that I'm pumped up for and excited to have, but it's been slow going. I haven't performed in the fights so far, but this next fight is going to change that and I'm looking at this fight on December 19th as my career fight. This fight is make it or break it. I want to go and blow it out. I don't just want to squeak by and barely get a win. That's not enough and I can't accept that.”

Of course there were going to be more twists and turns heading into her Saturday return to the Octagon in Orlando. Originally scheduled to face Germaine de Randamie, the Dutch striker was forced out of the bout due to injury, with newcomer Valentina Shevchenko stepping in. At the very least, it’s still a striker for Kaufman to display her wares against, and the way she sees it, anyone not named Alexis Davis or Leslie Smith, who she has fought three and two times, respectively, is just fine with her, especially after a long, but satisfying camp.

“I always enjoy the training, and this camp especially, it's been a long one for me, but I've really enjoyed almost every training session, and I can't always say that about every training camp,” she laughs. “It's grueling and it's tough, and that's what makes the fight - the work you put into it and the sessions when you show up and you don't want to be there. And I think this camp has been a little bit of a mental turning point for me. Maybe it's just that it's a new opponent. My last couple fights have been against people that I've already fought, and not that I'm not excited to be getting in the cage, but to have a new experience and new person on the horizon is extra motivation.”

Having the opportunity to make a statement against Shevchenko and move into the title picture is even more motivating, even if she could eventually face her friend down the line.

“I love Holly, we're great friends,” Kaufman said. “She's an amazing person and she definitely makes me a better person and a better fighter, having been training with her and being around her for years. So to see the right person get the win and, in the process, help me in the sense of giving me an opportunity to hopefully get a couple wins and then potentially a title fight, that wasn't really there a few weeks ago. So it's definitely some extra juice going into every training session.”

Yet Kaufman is quick to point out that, like Holm, her intention in getting to the top isn’t necessarily about the belt she gets to bring home, but about delivering her best performance and being the best fighter in the world. So while competing and bringing home a paycheck is nice, everyone wants to be the champ.

“It is my job and I will fight whoever, but I'm always striving to be better and to challenge myself against better people and to try to move up in any way that I can, and I think by getting that UFC title shot and that UFC title, you are number one,” she said. “Now really, that doesn't mean anything. You have a shiny belt, but the next day you're the same person. For me, it's more self-improvement and self-growth than it is having a tangible piece of metal on some leather. But at the end of the day, that, in itself is a pretty prized possession and not many people can say they have a UFC belt. And to be number one in the world, again, it's a weird thing because you think you always have something to be better at and to improve on. But ultimately, that should be your goal and if you're kind of just a journeyman like 'oh, I fight because I like it but I don't really care if I lose or win,' it's a serious sport and you shouldn't be putting your body on the line if you're just ho-hum about it. If I wasn't devastated from my last fight, then why would I get back in the cage? You should care.”

Sarah Kaufman does. Her April loss to Davis still stings, and the only way to remove that feeling is by handing it over to Valentina Shevchenko. She’s more than willing to do that, and while other fighters worry about Twitter followers and Instagram likes, Kaufman has figured out a simpler path to success.

“Perform in the cage,” she said. “Everything outside of that really doesn't matter. Your last performance is what you're known for and, over time, if it's a win, people are like 'oh yeah, you won,' and if it's a loss, 'oh yeah, you lost,' even if it was the most epic fight of all-time. So that's why you've got to stay active, and hopefully that's what I'm going to be able to do in 2016.”