Julie Kedzie - Doing It Her Way 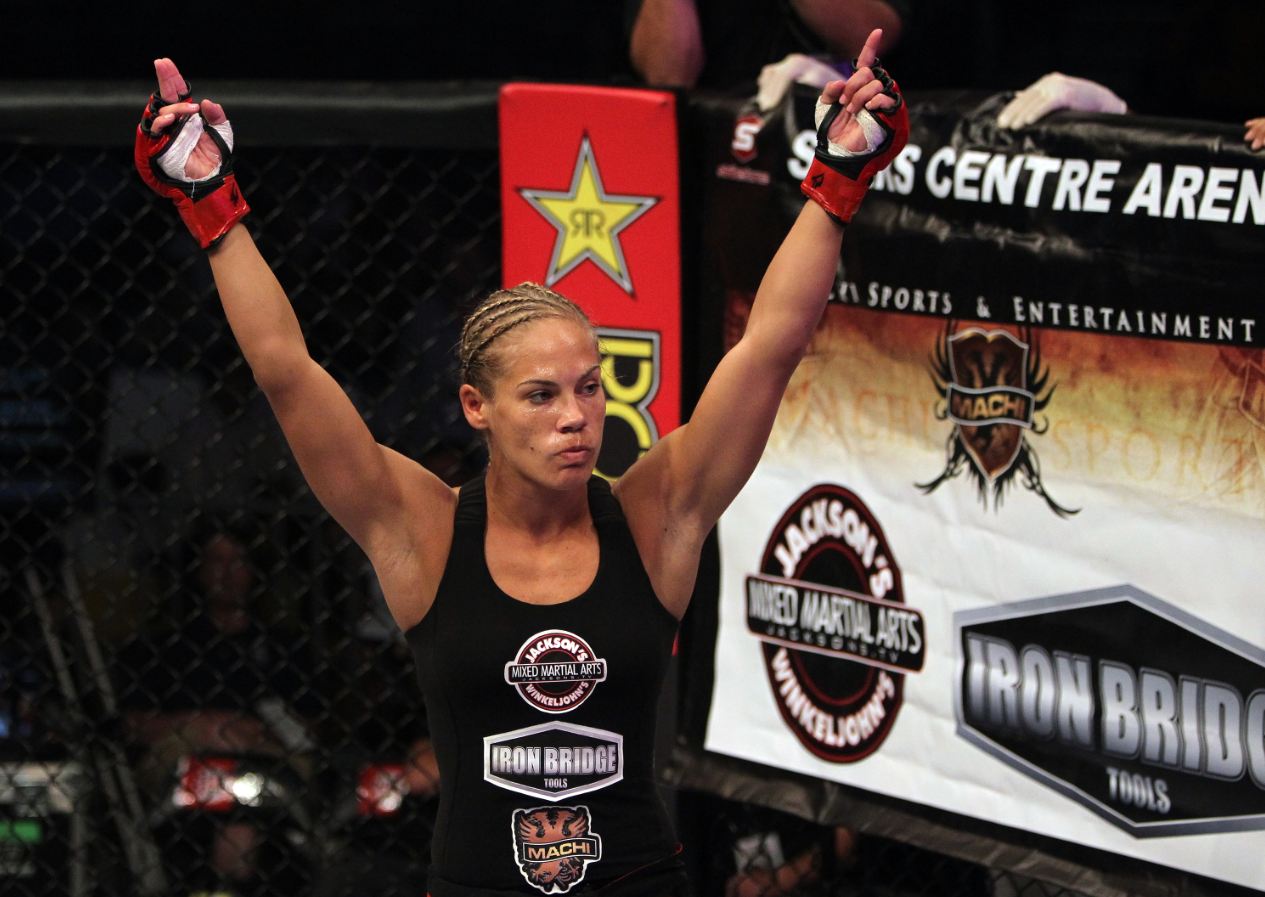 Aptly nicknamed “Fireball,” Julie Kedzie has the kind of personality that’s infectious, especially when talking about the sport of mixed martial arts, which isn’t really a sport for her as much as it is a way of life.

Sure, she trains and fights, and she will be back in the Strikeforce cage this Saturday after a year long layoff to face former bantamweight champion Miesha Tate, but she also works full-time at the Jackson / Winkeljohn MMA gym in Albuquerque, and when talking about the art of combat, it’s clear that it’s more than just a way to pay the bills.

“What we’re doing is legitimate and it’s not barbaric,” she said. “It’s art, and it’s poetry and it’s something that I think touches a deep part of the human experience to be able to express yourself combatively.”

It’s not what you would normally expect to hear in the course of a combat sports interview, but the 31-year old Kedzie is no ordinary prizefighter. If you didn’t know that over the course of her over eight year pro MMA career, you probably picked it up during a segment on Jackson’s gym that aired on the NBC Sports Network show “Sports Illustrated” a few weeks back, where she compared talking MMA with coach Greg Jackson to talking literature with Gertrude Stein. For many mainstream viewers and casual sports fans, it was an introduction not only to Kedzie, but to the sport.

It’s a positive development for sure, but as the Chicago native points out, “I’m probably the only person who’s gonna say this, but it’s a little bittersweet. It’s wonderful to be recognized as a professional athlete now, and I’m glad that the rest of the world sees it now and they’re getting a taste of it and they’re starting to really respect us as athletes and they don’t think we’re a bunch of barbarians smashing each other’s faces in. But at the same time, it was this fun thing to belong to something that nobody else really understood. It was a really fun club to belong to. But I’m very glad that we’re going to get mainstream money and support now and that my fellow athletes are actually going to be recognized as being athletes, including me. That’s wonderful.”

At the same time, you have to wonder if everyone gets what Kedzie is putting out there about her sport in terms of the things that go beyond the surface of two athletes punching each other in the face. Do people get the ‘art’ part of mixed martial arts, especially friends and family back home?

“Not quite yet,” she admits. “But part of that might be their love for me. Nobody wants to see somebody they love get punched in the face. That’s a hard thing to take. But my parents came around, they came on board, and my mother really wants me to ask all the refs if I can wear a helmet, and I say ‘mom, that’s not how it works.’ (Laughs) ‘Well, you just wear the helmet, the other girl doesn’t have to.’ But she knows that I’m happy doing what I’m doing. They saw me come into something that makes me really happy and makes me feel like a full human being, and I think that’s what they respond to and not necessarily the art of it. My father’s the one that put me in martial arts, and he’s always been on board, but he was into the very traditional martial arts. So I think he respects what I do. I don’t know that he completely understands it, but he respects that I did it and kinda went my own way, so that’s good.”

A pro since 2004, Kedzie has been a female fighting pioneer who was doing it before most of her peers had even thought about strapping the gloves on. And over the years, she took on all comers, from Shayna Baszler and Tara La Rosa, to Gina Carano and Kaitlin Young. In fact, it was her 2007 EliteXC bout against Carano on Showtime that practically introduced the world to women’s MMA.

Yet while Carano went on to become “the face” of the sport, Kedzie went back to the trenches, perfecting her craft while fighting 12 times in the ensuing years. It was a struggle most fighters have to endure, but for the fairer sex, there are different hurdles to overcome.

“I think that the struggle always comes down to the age-old argument of all female athletes, which is the selling of sexuality, and where I stand on all of that is that I don’t like it,” said Kedzie. “I don’t like taking sexy pictures. I’ve taken many and I’ve tried to jump into that whole thing and I’m just not comfortable with it. And my coach is like ‘just stop. Don’t do it anymore.’ And I was like okay. I’m just not comfortable with it. And some of the girls are, and I think it’s their right to do whatever they want to, but I do think that there never should be the expectation that you have to. No female fighter should ever have to take her clothes off unless she wants to. And I mean completely wants to, and not because of social pressure. If that’s how a girl wants to market herself, that is completely her right, but I don’t think there should be the pressure on any young girl to do that in order to get a contract with somebody.”

There’s also the issue of women not just fighting for themselves when the bell rings, but also being responsible – especially in televised bouts – to represent the sport and help move it forward. Her teammate, UFC light heavyweight champion Jon Jones, isn’t tasked with being the savior of the sport every time he steps in the Octagon to fight. But high-profile female fighters are given that pressure to prove not only that they can win, but that everyone else from their gender deserves to get these opportunities as well.

“I do think there is that added pressure,” she agrees. “I really wish there wasn’t because I think that we’ve proven continually by example that we’re entertaining and that we belong there, but there are so many naysayers. I do think there’s an extra pressure, but I’m just not buying it anymore. And maybe that’s because I’m the old grizzled vet of the division (Laughs), which somebody described me as and I love that. I’m here to do my job. I’m gonna make weight and I’m gonna fight. Yes, I want to put on a show, yes, I want to win my fight, and getting extra money or whatever it is for it, that would be fantastic. But at this point, I think the real truth of being a martial artist is that human experience of being in battle and engaging in battle with another human being. It’s very pure if you can get there, and that’s what I love and that’s what I’m always going to be looking for in fights.”

She’s certainly looking for it this weekend in Tate, who is coming off a high-profile loss of her title to Saturday’s headliner, Ronda Rousey, in March. It was a fight where Kedzie added a healthy bit of respect to her assessment of Tate.

“I’m not gonna romanticize it,” she said. “I always see people as potential opponents in a lot of ways but what I came away with was that she doesn’t tap. It’s a good thing to keep in your mind if you’re ever fighting her. And of course I respect the hell out of her for that fight and I think she was very technical. Obviously she succumbed to the armbar like previous opponents have, but I have nothing but respect for her in that kind of performance.”

As for her own last performance, a three round decision loss to Alexis Davis in her Strikeforce debut in July of 2011, Kedzie is less kind.

“The last one was horrible,” she said. “It was the most boring fight in the whole universe, and part of that’s my fault because I let myself buy into the pressure. I spent the whole year talking myself into never going to that place again where I’m flipping out and nervous and I care about what the people around me think because that’s not who I am. So I am on fire right now and I’m so ready to get in there and fight.”

How on fire? Well, suffice to say you can feel the heat through the phone.

“I would love to predict fireworks and amazing things, and that’s certainly what I’m going to try and deliver from my end,” said Kedzie. “I don’t know what she (Tate) is gonna do, but she’s always come out and she’s always been entertaining, so I would expect the same from her. I just want to engage in combat so bad. I just want to get in there and exchange and have her try to toss me around or have me try to toss her around. I want to indulge that part of myself and just have that purity again. I love it, and I think I’m blessed I get to do this for a living. I’m ready.”

As for everything that could happen should she win on Saturday night, Kedzie again strays from conventional thinking.

“I want to be the best in the world, but I have my sights on a different kind of being the best in the world than having a piece of jewelry around my waist,” she said. “Honestly, I’d love a shot at (Cris) Cyborg if she comes back. Those are the kind of fights I’m looking at. I’m looking at it from a different perspective. I’m 31, and this fight with Miesha will be my 27th professional bout, and the journey I’ve been on has brought me to a different understanding of the sport and what it means. And I don’t need to be famous and a title holder so much as I need those fights that are pure and hard and that are going to bring me to a different understanding of myself.”