Joseph Benavidez: Next Man Up 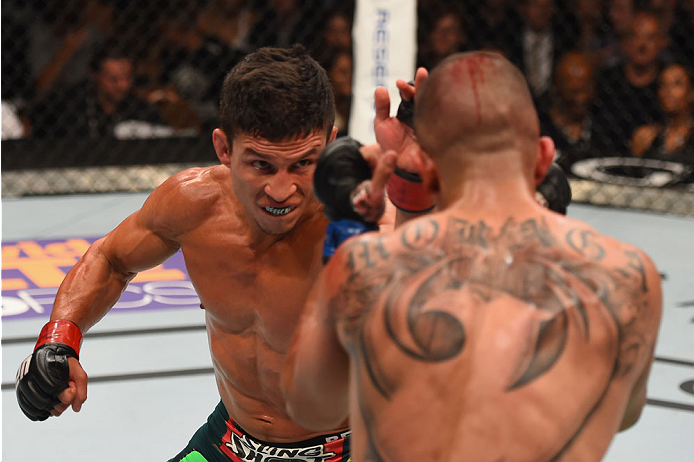 “To everyone out there, before you ask me anything, yes, I want the title fight.” Those are the words of Joseph Benavidez, the perennial flyweight contender who is currently stuck in the state of championship purgatory known throughout the sport as The (Rich) Franklin Zone. “That’s the only fight I want, but I am willing to do whatever it takes to get there.”

Three wins removed from his second loss to reigning champion Demetrious “Mighty Mouse” Johnson, and readying to welcome Ali Bagautinov back to the Octagon for the first time since the Dagestani contender was defeated by Johnson last summer, Benavidez felt the need to set the record straight once and for all about his approach and aspirations, hopeful that journalists and curious fans will get the message and allow him to escape the no-win situation that arises every time he wins a fight.

“I kind of know that I can’t really ask for these things, especially after two losses,” says the 31-year-old Team Alpha Male standout, who will tie the knot six days after his bout with Bagautinov at UFC 192 in Houston. “I don’t push it. I know that I’m the next best (guy in the division) and I will give him (Johnson) the best fight any day, but I also understand that he has to fight other people.

Benavidez laughs at the cyclical argument that he’s been stuck in for nearly two years. He’s undeniably one of the elite fighters in the flyweight ranks, but after losing to Johnson twice in the span of 15 months – and getting stopped in two minutes the second time around – the man who was in a similar position during his time at bantamweight just wants to continue facing the best the division, stacking victories and avoiding questions that have been asked and answered dozens of times over.

Which is why he’s happy to get the chance to face the returning Bagautinov.

The 30-year-old “Puncher” earned victories in his first three UFC appearances to run his winning steak to 11 and earn a shot at the flyweight title. Last summer in Vancouver, Bagautinov was on the wrong side of a one-sided contest against Johnson, showing a steely resolve, but failing to win a round on any of the scorecards.

After failing his post-fight drug test, the vanquished challenger was suspended for a year. He fell off the divisional rankings and faded from conversations about the best fighters in the 125-pound weight class not baring the last name Johnson, but having done his time, he’s poised to return and Benavidez sees him as the toughest possible fight available to him at this moment.

“It’s the toughest fight I can get outside of Demetrious and Dodson, who just challenged for the title,” says the man who has only ever lost to Johnson and Dominick Cruz. “I think Bagautinov is the toughest fight out there. I think Bagautinov is the harder fight and that’s something I like and I enjoy, especially where his last fight was a title fight.

“Maybe someone else in my position would run from that – ‘Why would I fight this guy that has been off a year? That does nothing for me’ – but it’s the toughest fight and that’s what I’m out there to do.

“I want to prove I’m the best,” he continues. “It’s cliché, but the only way to prove you’re the best is to fight the best guy out there.  For me, in this division, it is hard for me to gain something from a fight because I’m ranked No. 2 in the world and the only guy I have left to beat is the one guy and I can’t really fight him right now, so I need to make these other fights matter as much as possible and, for me, that means fighting the toughest guys, the best guys in the world, the guys the champion has fought.”

Prior to getting booked with Bagautinov, Benavidez was linked to a potential matchup with unbeaten Olympic gold medalist Henry Cejudo, who said he was interested in facing the perennial contender after defeating Chico Camus at UFC 188 in Mexico City back in June, but the bout never came together.

The main sticking point in putting the fight together was the date. After competing three times in seven months, Cejudo wanted a little extra time to recover and complete his college degree.

“If he would have just said that from the beginning, it’s no big deal, but don’t go out and say you want to fight someone and then when they offer you a date, don’t do it. If I said I wanted to fight someone, the first date they offered me, I would say, ‘Let’s do it.’

“At the end of the day, he wasn’t ready for those dates, but since he already turned down two dates, I wasn’t willing to wait for another one,” Benavidez adds. “At the end of the day, he’s probably making the smart move: he got to wait, he got the fight that he wanted against a less dangerous guy that I’ve already beat. He made the smart decision.”