Today’s amateur sports environment is dominated by headlines of athletes exiting early to turn pro and cash in while their careers are young. Jose “Shorty” Torres defied that path in order to stay in school and earn a degree before becoming a professional mixed martial artist.

But that’s just one note on Torres’ resume that makes him one of the most unique fighters in the world.

In 2015 Torres became the first-ever two-time World MMA Champion while competing at 135 pounds. He was considered the most decorated amateur fighter in the world after reeling off 25 consecutive wins and is now 2-0 as a pro competing for Titan FC. 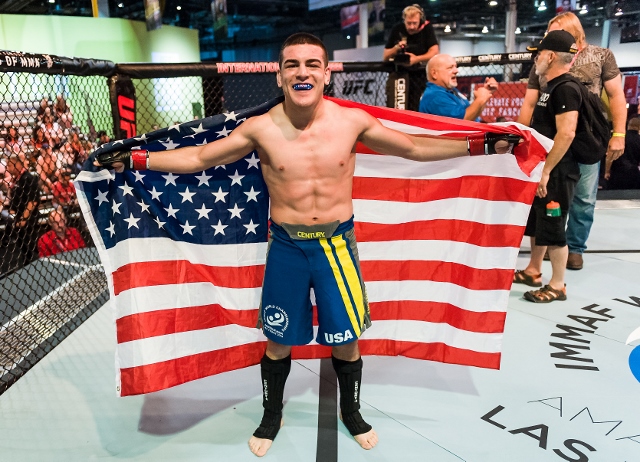 The obvious question: What took so long to turn pro?

“I had a full ride in college and if you turn pro the NCAA cuts off your scholarship,” Torres said. “I wanted to get my degree. I want to own my own gym and run a clinic for kids who don’t have money.”

Torres made the Dean’s List multiple times and earned a Bachelor’s Degree in Leadership, Sports and Exercise Science from McKendree University. He also spent that time perfecting his craft. Torres said it’s rare for fighters to have so many amateur fights before making the leap, but his decision was calculated.

His coach Bob Schirmer wanted him to have a minimum of 20 amateur fights, to allow Torres to face every kind of opponent and every kind of style so by the time he became pro there’d be no surprises. Schirmer and Torres began to see the anticipated results in the second year of competing at the World MMA Championships.

“The first year (when I won) was tough and the second year I was able to dominate because I gained so much experience,” Torres said.
RELATED CONTENT: IMMAF growing MMA's reach globally

That choice has paid off so far. Torres won his pro debut with a first-round guillotine submission at Titan FC 37. He improved to 2-0 at Titan FC 38 and up next is a bout on Aug 5 at Titan FC 40 in Miami, Fla.

In between training with Johny Hendricks’ camp and later this month at Jackson-Wink, Torres will be traveling to Las Vegas for International Fight Week where he’ll be working with the IMMAF (International Mixed Martial Arts Federation).

Torres will be providing commentary for the amateur events, as well as doing interviews and giving speeches – a perfect fit for the only two-time world MMA champ, one who understands the amateur and pro games so well.