Jorgensen Bringing a Sense of Urgency Back

"I’m going back to the way I was in the WEC. I’ll put another five fight win streak together and then worry about title shots." - Scott Jorgensen 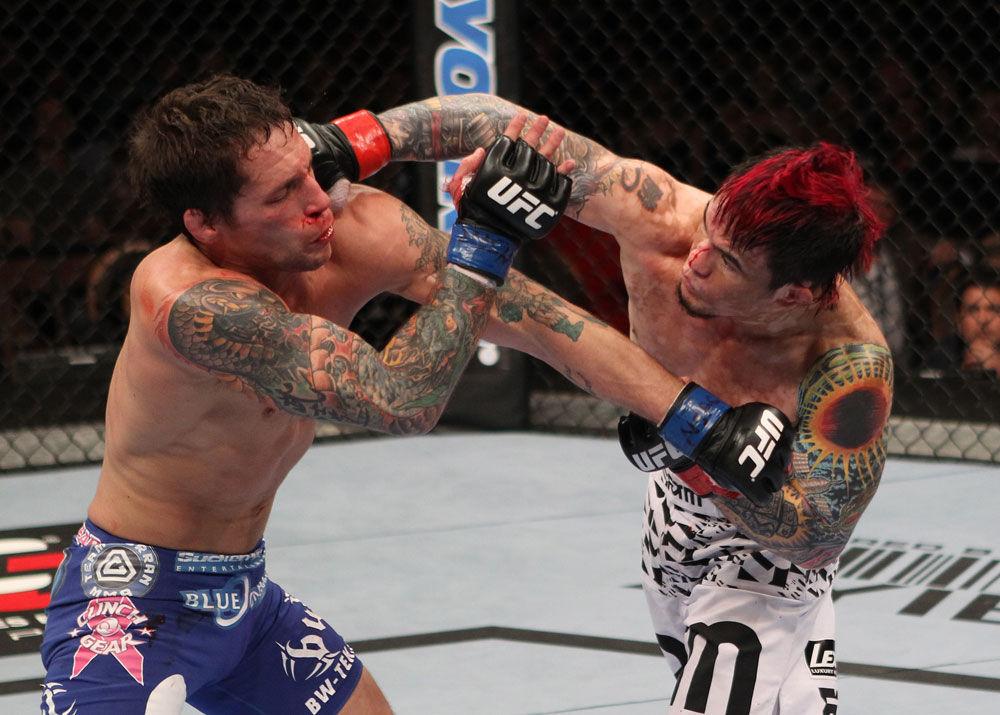 Yoda may have made the line famous, but UFC bantamweight contender Scott Jorgensen has long subscribed to the “do or do not” philosophy of life. Or more accurately, “Young Guns” doesn’t want to be told what he’s doing wrong; instead, he just wants some guidance on how to do it right.

“You gotta look at the negatives, the positives, and the real picture and say what am I gonna change, how do I get better, what do I do,” he explains. “It’s not what don’t I do. You can ask (trainer and former Muay Thai star) Kit Cope. When he first started training me, he kept telling me ‘don’t do this.’ I said ‘you can’t tell me don’t.’ You want me to change something, tell me ‘do this.’ This sport’s such a mental game that you have to look at do, not don’t.”

That line of thinking has brought the 29-year old pretty far in his athletic career, whether it was as a three-time Pac-10 wrestling champion for Boise State or as a 13-5 mixed martial artist who has been fighting under the Zuffa (UFC / WEC) umbrella for over four years. But after a clear-cut yet non-explosive win over Jeff Curran last October and a decision loss to Renan Barao in February, Jorgensen had some retooling to do.

What did he come up with? If we’re sticking with the Hollywood quotes theme, Jorgensen, as Mickey Goldmill told Rocky Balboa in Rocky III, “got civilized.”

“Barao was kind of a wakeup call that something needed to change with me, and I made some changes with the way my mentality going into the cage is, and it reminded me of things,” said Jorgensen, admitting that he was a bit too comfortable on that night in Las Vegas.

“I never pulled that trigger, I never exploded. I got comfortable and you can’t fight in a comfort zone. You gotta step out of it. And if I get uncomfortable and I’m working hard and stepping up my game, my opponent’s gonna have to do the same to keep up. I know I can function under that pressure very well. I’ve done it in the past and I’ll do it again. If anything, there’s one thing that I’m good at, and it’s firing back when I need to.”

That explosion of energy never took place against Barao. Far from being outclassed, Jorgensen seemed to be waiting for something to happen, and it never did. By the time the 15 minutes were over, he had his first loss since a similarly listless five round defeat to Dominick Cruz in December of 2010.

“It was a tough fight and a tough loss for me to swallow because I still think I’m a better fighter than Barao,” said the Boise battler. “I just didn’t fight to my full potential and I definitely didn’t fight to my physical strengths. I fought a guy with a four, five inch reach advantage at a distance, trying to play the ‘who can land a quick 1-2 and get out’ game. And I did well with it, but if you’re going to look at the pure physics of things, he’s already winning that, and I wasn’t willing to step outside of the box and go back to getting inside, clinching up, and dirty boxing. I wanted to stand outside and show that my striking’s as good as this young, hyped up kid’s is.”

In July, Barao will challenger Urijah Faber for the interim UFC bantamweight title as Cruz recovers from a knee injury. That could have been Jorgensen in there with his buddy Faber if he would have won the UFC 143 fight, but that kind of speculation doesn’t do him any good now, nor does looking ahead at a future where he could be back in the title picture with a few good wins.

“That may have affected me, getting my hopes up and making me lose track of where I need to be and what I need to do, but I don’t think it affected the fight all that much,” said Jorgensen. “I’m going back to the way I was in the WEC. I’ll put another five fight win streak together and then worry about title shots. I’ve gotta go back to that mentality where I take care of business one fight at a time, and that title shot will come.”

That next fight comes this Friday in Florida against former WEC 135-pound boss Eddie Wineland. It’s a clash of veterans who share an aggressive style, and when it comes to high-level fight action, this is goooood stuff.

“It’s a good fight for me, and I like the matchup,” he said. “I think Eddie’s a tough guy, he’s well-respected, and there are no easy fights in the UFC, so going in there to fight Eddie is just like fighting anybody else in the division; I gotta go in there and I gotta earn it, and go in there and make it exciting. And Eddie’s a good guy to have an exciting fight against.”

And this time, after having four months to reflect (a time aided by two weeks in Brazil that he says “opened my eyes to so many things.”) and get better, he insists that the Scott Jorgensen showing up to fight this week won’t be the same one who was in the Octagon on February 4th.

“When things are on the line, it’s whoever’s got that sense of urgency (that wins),” he said. “You can’t sit back and wait, whether you’re trying to get a job in the real world or stepping inside the Octagon. If you want that top CEO position, you gotta take the risks and put yourself out there. It’s the same thing in the Octagon. You can wait around all day for that one big moment to come to you, or you can create it. And with Barao, that was my problem. I sat back comfortable, waiting for my big opportunity to come.”

Not this time. Now it’s do or do not.