"It’s simple: if they give me a Top 10 dude, I’ll hurt that dude and keep it moving. Ain’t nothing to it." - Jorge Masvidal 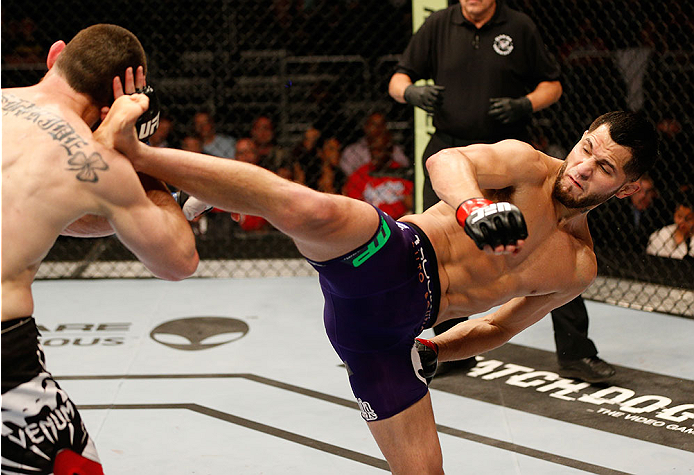 As mixed martial arts has continued to evolve and develop, more and more athletes are taking cues from their counterparts in other sports and transforming their pursuit of greatness in the cage into a year-round lifestyle.

Just as NHLers went from following a game with a round of wobbly pops in the dressing room to riding stationary bikes and staying close to game shape 365 days of the year, many fighters have turned the clean diets and healthy choices that dominate their training camps into everyday activities, eschewing junk food and guilty pleasures for options that will help them, not hinder them, during their next trip to the gym.

Jorge Masvidal isn’t that guy. The 29-year-old Miami native is a fast food connoisseur and his post-fight ritual includes indulging in a few meals that land at the opposite end of the healthy eating spectrum.

Last time out, “Gamebred” fought close to home, collecting a victory over durable veteran Pat Healy on the preliminary portion of the UFC on FOX card in Orlando. While it took some time for him to get his victory meal, the drive home and subsequent vacation more than made up for the delay.

“It took us a while to get to the hotel because we were in the arena until like 1:30 at night, but as soon as I got back to my hotel room it was Steak ‘n Shake. I had a Frisco Melt, a Wisconsin Buttery and I don’t remember what kind of milkshake, but I had a milkshake.”

If you’re partial to fast food, hearing him describe his selections is enough to make you hungry and checking out the Steak ‘n Shake website to find out what makes up a Frisco Melt, and a Wisconsin Buttery will send you on a fast food run of your own. And Masvidal didn’t stop with his late night celebratory meal either.

“I had Steak ‘n Shake that day. The next day I might have had McDonalds. I drove up to Orlando and then I drove down to Miami and me and my wife went on a cruise,” recalls the emerging lightweight contender. “I fought on Saturday and on Sunday, me and my wife went on a six-day cruise. We went to Cozumel, Mexico, Belize, which was amazing, some island off Honduras and Turks and Caicos.

“I destroyed that cruise, man. They lost money with me.”

Masvidal is hungry for more than combo meals and all-you-can-eat-buffets though.

The American Top Team product has gone 3-1 inside the Octagon after posting a similar mark under the Strikeforce banner, with victories over Healy, KJ Noons and former Ultimate Fighter winner Michael Chiesa. Despite his success and having earned a place in the lightweight rankings, “Gamebred” is champing at the bit for a chance to throw down with some of the bigger names in the 155-pound ranks, but those opportunities haven’t come his way as of yet.

Masvidal returns to the cage this weekend, squaring off with Daron Cruickshank. While the former Ultimate Fighter contestant has notched consecutive technical knockout wins via Street Fighter II-like combinations and boasts a 5-2 record since coming off the live season of the long-running reality TV competition, “The Detroit Superstar” wasn’t exactly the opponent the 26-8 Masvidal was hoping for this time around.

“I’ve got to stay active,” he offers, finding a personal silver lining in this weekend’s matchup with Cruickshank. “I’m not one of those guys that can fight once or twice a year. I love to stay active.

“Obviously, if you asked me, I would have loved to fight a Top Five guy rather than fight this dude, but it doesn’t matter in the end. As long as I’m competing, having fun – the UFC is paying me good money whether I fight a Top 10 guy or not, so I’m happy. I can’t complain. I’m in a good place.”

While he might be satisfied with another opportunity to put money in the bank and another win on his resume, the competitive and confident lightweight has some ideas about how UFC matchmaker Joe Silva should look to book him after he’s done earning a victory this weekend against Cruickshank.

“It’s simple: if they give me a Top 10 dude, I’ll hurt that dude and keep it moving. Ain’t nothing to it. These Top 10 guys – these Billy Bad Asses – I don’t see it. I don’t see one of these guys that I can’t beat up on any given day.

“I’ve been looking at this roster for a while and a lot of these guys are going to be easy money. I can’t wait until they give me the call and say, “You’re fighting so-and-so” and I get to expose so-and-so, you know? I’m just waiting on my phone call.

Masvidal isn’t overlooking Cruickshank, but he’s also not afraid to admit that he’s taking a more macro view on his career than simply focusing in on the task at hand and ignoring the road ahead.

A pro for over 10 years, Saturday’s contest will be his 35th professional fight and he feels like he still hasn’t quite hit his stride. He’s close, and as a result, he wants to use these next few years of his career taking on the best the division has to offer and proving that he deserves to be considered a member of that group.

“I’m almost 30, but I don’t feel it. I’ve been a pro for a while, but it doesn’t mean my body has taken that much abuse. I don’t much get hit and haven’t been in fights where I get dropped multiple times. My body doesn’t have that kind of wear and tear.

“I look at the Top 10, up and down – the guy that’s the No. 1 contender, Gilbert Melendez, I fought him with one hand and I did great,” he says, referencing his December 2011 bout with the former Strikeforce champion where he entered the bout with a pre-existing hand injury. “I don’t see any of these guys posing a threat to me, honestly.

“I’m not taking this guy lightly, but I just have to do my job and get rid of him,” he adds in regards to his matchup with Cruickshank this weekend.

Should things play out that way, Masvidal already knows what he’d like next.

“I want a Top Five dude, a Top 10 dude right after this fight. Who it is, I don’t care,” he says pointedly. “I want the fight that people say, `Man, there is no way he’s going to win that fight. He’s going to get crushed.’ Let me get crushed then or maybe, by the grace of God, I get the win. Those are the fights that I want.”